It’s always dangerous to use the word “never” in a broad sweeping generalization, but I do believe that I’m safe when I say that I’ve never, ever heard an avid birder say, “I wish I had a lens with a shorter zoom range.”

No, like that pithy observation that says it’s impossible to be too rich or too thin, it’s a given that, when it comes to photographing birds, the longer the lens, the better. Of course, birder-friendly focal lengths like 400mm, 500mm, and 600mm don’t come without a hefty price — both in terms of dollars spent and pounds hauled around.

If you didn’t want to pay the price and haul the weight, you were pretty much relegated to shorter, cheaper, and slower lenses — not the ideal triumvirate for impactful bird photography — or one of those superzoom bridge cameras.

The latter were approaching that ideal; they are small, manageable cameras with incredible reach, but the sensor size was so small that the picture quality suffered, and because they were aimed at the amateur market, the optics were far from first class.

What if a manufacturer could make a superzoom bridge with a bigger sensor and some really excellent optics, like those from Carl Zeiss, for instance? Sounds pretty ideal, doesn’t it? You’d have the reach, the picture quality, and the portability. Sony answered that challenge with the RX10 IV.

Its 1-inch backlight sensor is a sterling performer, even in lower light, and yields rich, detailed prints that I’ve blown up to 24×36 inches and beyond with superb results. The camera’s built-in, 24-600mm equivalent, f/2.8-f/4 lens features razor-sharp Carl Zeiss optics.

It’s one thing to have a sharp lens, but if it doesn’t autofocus quickly and surely, it’s not going to do you much good photographing fast-moving birds. The RX10 IV is the first camera in the series to feature Sony’s lightning-quick Phase Detection AF system, which makes catching sharp pictures of birds in flight much more likely than ever before with a similar camera.

For the accompanying photo of a cormorant feeding its young in a Florida state park, I was cranked all the way out to 600mm. A lot of other people were on the boardwalk, and my tripod was picking up vibrations from all the movement. I decided to brace myself and try to handhold the camera. I had plenty of sunshine to work with, so I was able to crank the shutter speed up pretty high. The image stabilization of the camera did a nice job of providing a sharp image, even handheld.

You can try this with a camera that weighs about a pound but not with a 12-pound 600mm on your DSLR.

Another little “secret weapon” that the RX10 IV, and many other Sony cameras, have is something called “Clear Image Zoom.” This is where the camera crops into the sensor for 2x magnification. Unlike standard “digital zooming,” the Clear Image Zoom retains the sharpness. In fact, if you’re shooting 4K video, you can’t tell any difference at all, and in stills, the difference is minor.

But what a difference that effective 1200mm reach can make in a photo!

In my video and still work, this camera, often overlooked by pros and “serious” photographers because they are still working on the old “bridge camera” paradigm of quality loss, has given me super-telephoto looks at any time and in any situation. I don’t mind sharing that info with you, but just don’t tell my competitors! 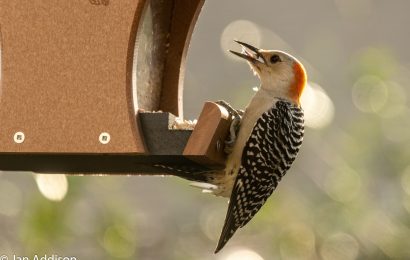 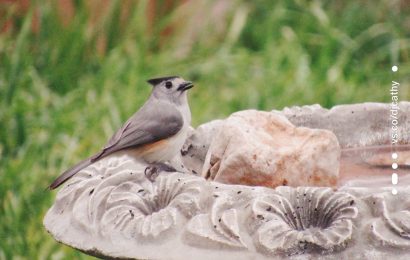 We wondered what birds people are seeing while they’re home due to the pandemic, and we received photos from around the country. 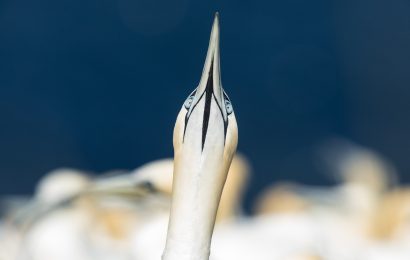 Rajesh Mohan’s stunning image of a Northern Gannet from a Quebec breeding colony wins first place in our contest.