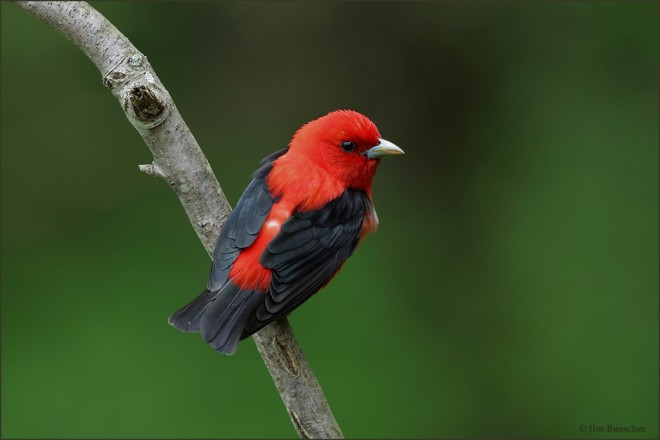 We love Scarlet Tanager, and we know David Flaspohler does too. His first-person account of an extremely close encounter with the bird is a highlight of our April 2016 issue, which goes on sale on newsstands on March 1.

The red and black bird typically starts departing its winter grounds in Panama and northwestern South America in mid- to late February and makes its first appearance on the Gulf coast in late March. First arrivals at locations farther north follow apace: in southern Ohio around April 20-25, along Lake Erie the first week of May, in Ontario in early to mid-May, and in Minnesota in late May. The tanager migrates alone or in small flocks of warblers, thrushes, vireos, and other Neotropical migrants.

The photo above was taken by jbuescher. We found it and the photos below in our U.S. and Canada and Backyard galleries.

Two males and a female 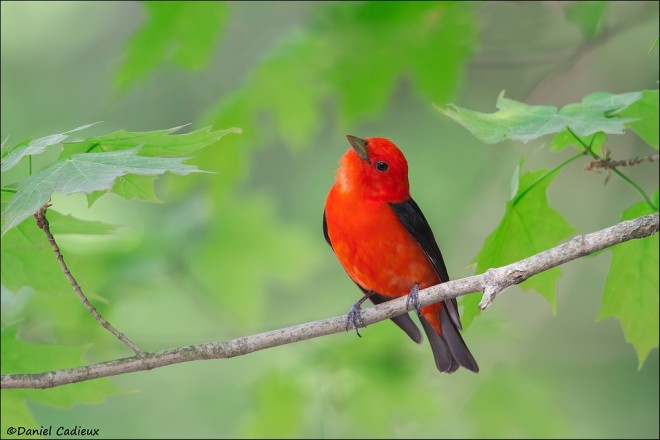 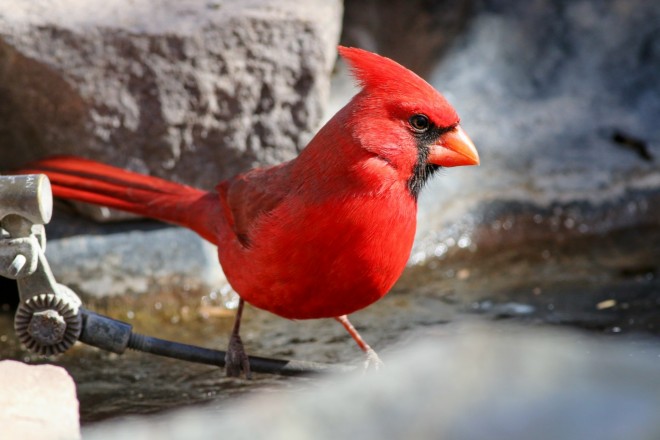 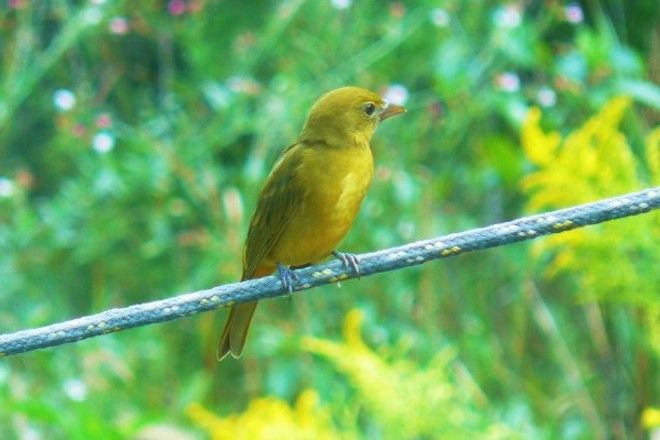 We bet you rarely have any trouble identifying a male Scarlet Tanager in breeding plumage, shown above in a picture by Daniel Cadieux. A quick look will rule out crested, black-faced Northern Cardinal. (Jerry Nels Barringer photographed this one near Hereford, Arizona, with a Canon EOS 70D and 400mm lens.) The male tanager’s jet-black wings and tail and all-red face are simply unmistakable. Adult females, however, often make us take a second look. They’re olive green above and olive yellow below. Tim Shoffner photographed this one in Gasconade County, Missouri, with a Panasonic Lumix DMC-FZ8 camera. 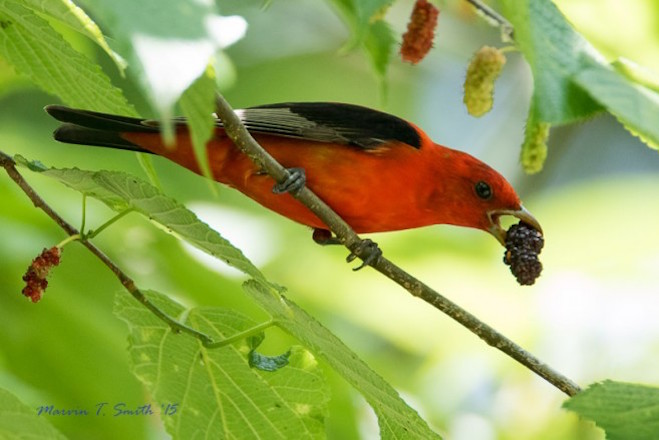 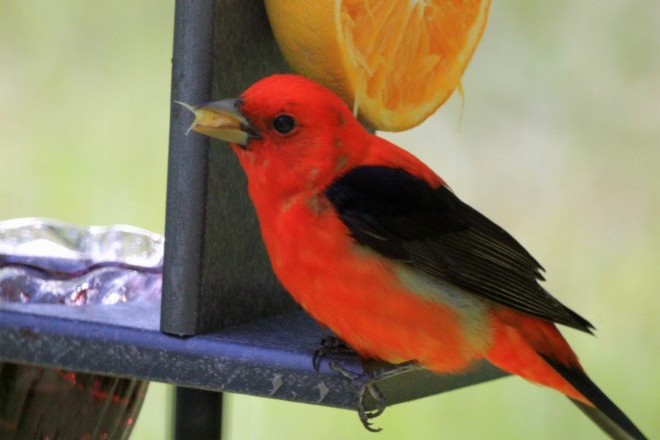 During breeding season, Scarlet Tanagers eat mostly insects — all sorts of flying and nonflying bugs, various insect larvae, and spiders — but they will also eat earthworms, tender buds, and, as this revealing pair of photos shows, wild and cultivated fruits. The tanager at top is enjoying a mulberry (Marvin Smith photographed it in Valdosta, Georgia), while the bird above has a mouthful of juicy orange. Jim Jennings spotted it at his oriole feeder in May 2013. He took the photo with a Canon EOS 60D camera with a Canon 300mm lens.

Worth a second look 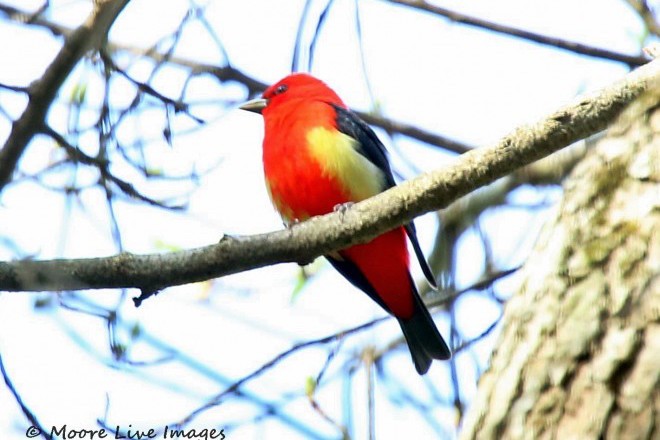 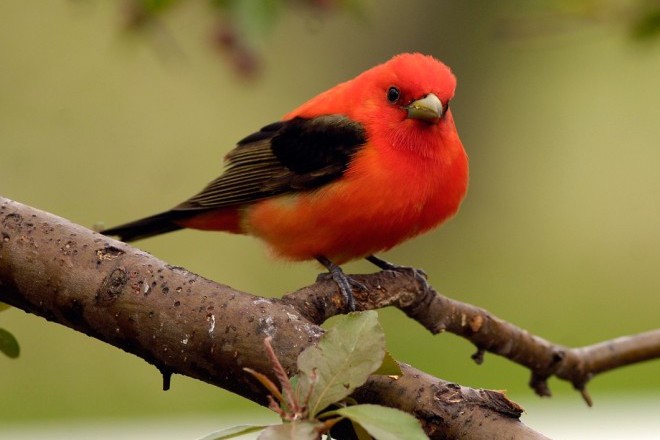 Perhaps what’s most amazing about the male tanager’s vivid red plumage is that it’s temporary. In winter, their body feathers are greenish yellow, not red. The birds start to molt into their familiar breeding plumage while they’re still on the wintering grounds, between January and March. As shown in the photo at top, taken by Mark Moore, some young males show up with yellow feathers scattered among the red body feathering. David Walsh photographed the all-red bird above with a Nikon D2x camera and a 300mm f2.8 lens.

See the contents of our April 2016 issue.

Maureen Hills-Urbat of Rockyview County, Alberta, is the winner of our first Backyard and City Birds Photo Contest with this image of squabbling Blue Jays. … END_OF_DOCUMENT_TOKEN_TO_BE_REPLACED