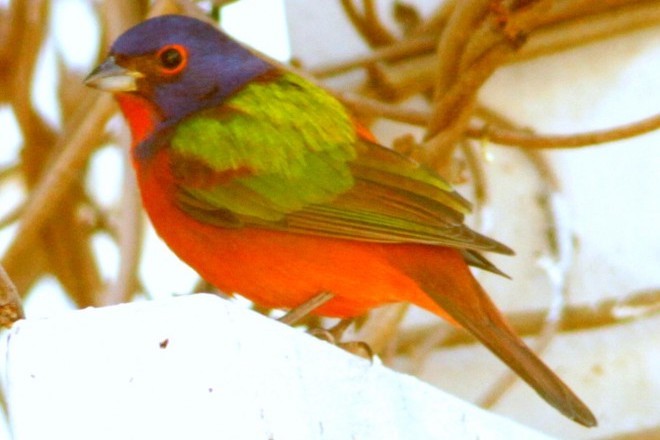 “In winter,” Dybas writes in her article, “Painted Buntings may drift off course, winding up far afield of their usual haunts.”

Indeed, in the winter of 2015-16, buntings turned up in Virginia, Connecticut, Vermont, and New York — including the now-famous male that showed up in Prospect Park, in Brooklyn. And in the winter of 2014-15, a male found his way to Eveleth, Minnesota, near the U.S.-Canada border, and newportbird photographed the male above at a feeder in Newport, Rhode Island. He took the photo in early March 2014, when the weather forecasts called for very cold temperatures and snow flurries.

The November-December 2016 issue of BirdWatching, containing Cheryl Lyn Dybas’s feature article about the Painted Bunting, is on sale at Barnes & Noble and other newsstands now.

Read a preview of the November-December 2016 issue.

Take a sneak peek at the contents of the issue.