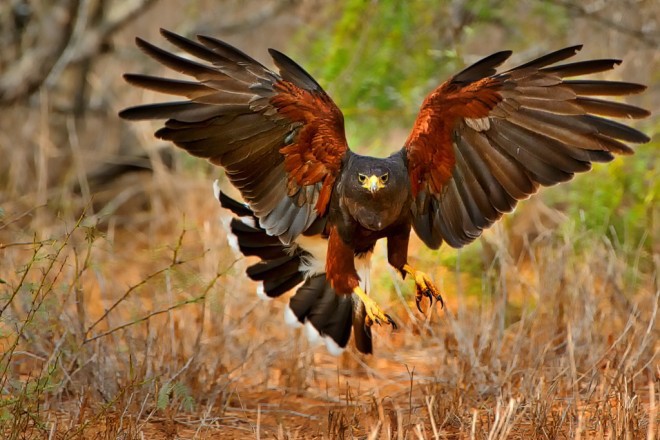 Spectacular, remarkable Harris’s Hawk is the bird that Kenn Kaufman focuses on in his column “ID Tips” in our August 2016 issue. And remarkable it is, because in contrast to the solitary nature of most birds of prey, Harris’s Hawk may be social in all seasons. What’s more, the hawk’s appearance is as unique as its lifestyle.

It’s somewhat similar to the broad-winged, broad-tailed hawks of the genus Buteo but classified in a separate genus, Parabuteo, because of notable differences in structure. Compared with a typical Buteo like a Red-tailed, Harris’s Hawk has a large head, a heavy bill, long legs, broadly rounded wingtips, and a long tail. We assembled this photo gallery to show off these characteristics.

The photo above was taken by Donald Brown in November 2011 at the Tacubaya Ranch, in South Texas. He tells us the hawk was swooping to a perch on a log. Donald used a Nikon D3X camera with a Nikkor 200-400mm lens set on shutter priority.

Maureen Hills-Urbat of Rockyview County, Alberta, is the winner of our first Backyard and City Birds Photo Contest with this image of squabbling Blue Jays. … END_OF_DOCUMENT_TOKEN_TO_BE_REPLACED