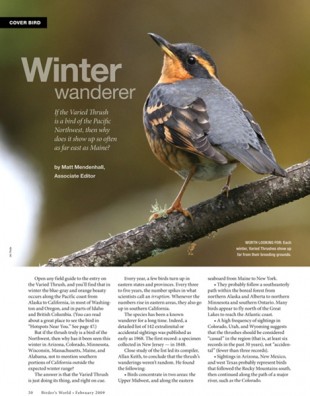 Open any field guide to the entry on the Varied Thrush, and you’ll find that in winter the blue-gray and orange beauty occurs along the Pacific coast from Alaska to California, in most of Washington and Oregon, and in parts of Idaho and British Columbia. (You can read about a great place to see the bird in “Hotspots Near You.”)

But if the thrush truly is a bird of the Northwest, then why has it been seen this winter in Arizona, Colorado, Minnesota, Wisconsin, Massachusetts, Maine, and Alabama, not to mention southern portions of California outside the expected winter range?

The answer is that the Varied Thrush is just doing its thing, and right on cue.

Every year, a few birds turn up in eastern states and provinces. Every three to five years, the number spikes in what scientists call an irruption. Whenever the numbers rise in eastern areas, they also go up in southern California.

The species has been a known wanderer for a long time. Indeed, a detailed list of 142 extralimital or accidental sightings was published as early as 1968. The first record: a specimen collected in New Jersey – in 1848.

Close study of the list led its compiler, Allan Keith, to conclude that the thrush’s wanderings weren’t random. He found the following:

In the 1990s, scientists uncovered more of the bird’s habits. In the western Great Lakes region, for example, the thrush occurs most often within a 120- to 160-mile-wide corridor stretching from northwestern Minnesota to southeastern Wisconsin.

According to research by Peder Svingen of the Minnesota Ornithologists’ Union, approximately 80 percent of Minnesota’s birds are first discovered from November through January, and the highest counts are in coniferous forests.

Samuel Robbins, one of Wisconsin’s best-known ornithologists, noted that most thrushes in his state rely heavily on feeders, “especially those located close to oak woodlots.” And when the birds find a favorable spot, they usually stick around for at least a week and sometimes for four or more months.

In 1996, the coordinators of the Cornell Lab of Ornithology’s Project FeederWatch reported on the thrush’s irruptions and on the overall population. They found a two- to three-year cycle of abundance in most of the normal wintering range. The variations may be tied to biennial peaks of acorns, which are important food items in winter. Severe winter weather may also play a role.

Whatever the cause, wrote the FeederWatch authors, population fluctuations happen independently of the bird’s east- and southwestward irruptions. In fact, almost all wandering Varied Thrushes appear to be of one race – the northern interior subspecies Ixoreus naevius meruloides.

“The regularity of occurrence of extralimital individuals, especially in the western Great Lakes region,” they wrote, “suggests that these birds are not vagrants but rather represent a widespread but sparse winter distribution, possibly involving birds from the breeding grounds in northern Alaska and northwestern Canada.”

Keith also suggested that thrush wanderings were no accident. He noted that the ancestors of the Varied Thrush likely invaded North America from Asia, and that “fairly frequent and numerous attempts probably were necessary before a breeding population became established.”

“It may be that the regularity of extralimital wandering [recorded today] is a trait of this species that to some extent was responsible for its presence as a breeding species in North America in the first place.”