Become a member and get exclusive access to articles, contests and more!
Start Your Free Trial
BirdWatching  •  News & Features  •  Species Profiles  •  Species profile: How to add to knowledge about Purple Martins: the Scout-Arrival Study, Purple MartinWatch, and Project MartinRoost 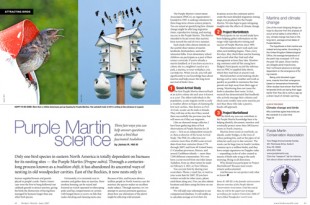 Only one bird species in eastern North America is totally dependent on humans for its nesting sites — the Purple Martin (Progne subis). Through a centuries-long process known as a tradition shift, it has abandoned its ancestral ways of nesting in old woodpecker cavities. East of the Rockies, it now nests only in human-supplied houses and gourds placed in people’s yards. Native Americans were the first to hang hollowed-out calabash gourds to attract martins, giving the birds the distinction of having been managed by humans longer than any other bird species.

Fortunately, it is extremely easy to monitor and gather data on martins. Most modern housing can be raised and lowered on winch-operated or telescoping poles and has compartments or cavities with hinged doors or screw-on lids that make checking and cleaning nests easy. Because of this, and because about a million people in North America care for martins, the species makes an excellent study subject. Through martins, we can attempt to answer pertinent questions about how our alterations of the planet might be affecting wild animals.

The Purple Martin Conservation Association (PMCA), an organization I founded in 1987, is seeking volunteers for three long-term citizen-science projects. Two are aimed at quantifying how climate change might be affecting migration times, reproductive timing, and nesting success in the Purple Martin. The third is intended to locate roosts that martins form toward the end of every summer.

Each study relies almost entirely on the careful observations of martin landlords, birdwatchers, and other interested folks. Even elementary school children can participate as a part of their science curricula. If you’re already a martin landlord, or if you have access to a colony site in a neighbor’s yard or at a park, a marina, or your workplace, you can help too. When you do, you will add significantly to our knowledge base about martins and help ensure the long-term survival of birds I love.

Scout-Arrival Study
The first Purple Martin observed back at an active colony site each year is known as a scout. The oldest individuals in the population, scouts migrate north as early as weather allows in hopes of claiming the best nest cavities. Also known as First-Arrivals, scouts can be male or female. They will stay at the site if they nested there successfully the previous year but will move on if they are migrants.

Like an obsessed stamp collector, I have been gathering dates of first observations of Purple Martins for 20 years — first as an independent researcher, then as director of the Scout-Arrival Study. The PMCA’s collection now contains more than 45,000 scout-arrival dates from four centuries (from 1778 through 2007) and from 49 United States, 11 Canadian provinces, Mexico, and several Caribbean islands — more than 7,500 different communities. We even have a scout record from one John James Audubon, from an observation he made on February 4, 1821, in New Orleans.

You can join him by sharing your scout dates. Phone, e-mail, fax, or mail us your scout date for 2007. (If you have written records for other years, please send them along too.) You can also submit locations and dates using the form on our web site.

We will add your information to our computerized database. It will enable us to calculate average arrival dates for locations across the continent and to create the most detailed migration-timing maps ever produced for the Purple Martin. We also hope to gain intriguing insights into the effects of climate change.

Project MartinWatch
Participants in our second study have been helping gather information on the range-wide reproductive timing and success of Purple Martins since 1995.

Martinwatchers start work each year when nest building begins. Then, every five days, they check their martin housing and record what they find and what management actions they take. Monitoring continues until all the young have fledged. Participants record the information on PMCA-supplied data sheets, which they mail back at season’s end.

Martinwatchers avoid making checks during cool or rainy weather and work as quickly as possible to minimize the time parents are kept away from their eggs or young. Monitoring does not cause the birds to abandon their nests. In fact, research has demonstrated that landlords who actively manage their colonies and check nests weekly raise more martins per nest than those who take a passive, hands-off approach.

Project MartinRoost
The third way you can contribute to the Purple Martin knowledge base is by helping identify, document, monitor, and eventually protect more than 300 known roosts in North America.

Martins form roosts in reed beds, on islands, under bridges, in the trees of urban parking lots, and on the pipes of oil refineries each year in late summer. The roosts can be huge (one in South Carolina contains up to a million birds), and they leave unique signatures on Doppler radar – expanding circles of color created as masses of birds take wing in the early morning, flying in all directions.

Why should you participate in Project MartinRoost? Because most roosts remain undocumented.

And because we can protect only what we know.

James R. Hill III, is the founder and executive director emeritus of the Purple Martin Conservation Association. Until the end of May, he will be the supervisor of image surveillance for Auburn University’s 2006-07 Ivory-billed Woodpecker search team.

The hypothesis is that martins are indeed arriving earlier. According to the United Kingdom Meteorological Office, the average temperature of the earth has increased 1.5°F over the past 100 years. Since martins are obligate aerial insectivores, their northward advance is strongly dependent on the emergence of flying insects.

Being cold-blooded organisms, insects time their emergence based on temperature thresholds. Other studies have shown that North temperate birds are laying their eggs earlier than they did a century ago as a direct result of climatic warming.

Also in this issue:
Climate change and birds: Why scientists agree that birds are like canaries in a coal mine.