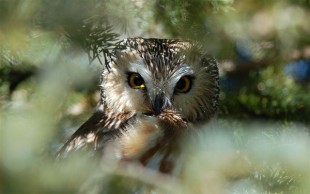 Jeff Schultz hefts 185-pound propane tanks for a living, and has been nicknamed “Little Hercules” by his customers. He has a hobby befitting his rugged personality — raptor-banding. Like others in this macho fraternity, he loves to tell war stories and show off his scars. Yet one recent crisp fall evening, this tough guy confessed to me, “Yeah, I’ve kissed a few saw-whet owls.”

We were preparing to release another Northern Saw-whet Owl we had just banded at the Rouge River Bird Observatory in southeast Michigan. We marveled once again at the captivating cuteness of these pint-sized owls, eastern North America’s smallest.

Jeff and I are not alone in our affection for saw-whets. This is a species that beguiles the few fortunate enough to see them.

While it is one of the most common North American owls, the saw-whet is highly nocturnal and very secretive. It has been known for decades that saw-whets are migratory, since modest numbers were captured at owl-banding locations across the Great Lakes and eastern seaboard.

However, the true extent and magnitude of their movements was not really appreciated until 1986, when the Little Suamico Ornithological Station near Green Bay, Wisconsin, developed an audio lure — the continuous broadcast of saw-whet courtship calls — to help attract migrating owls into their nets. The adoption of this technique by other stations has dramatically increased capture rates (up to tenfold is not uncommon), and now thousands of saw-whets are banded annually, most during fall migration.

Northern Saw-whet Owls nest across North America (see map). They inhabit all types of woodlands, although they prefer coniferous forests, and prey mostly on small mammals, especially deer mice and voles. They winter throughout much of their breeding range, but probably vacate the northernmost portions, and many move south in the autumn; eastern populations may sometimes reach the Gulf states. Less studied in the western U.S., their migration chronology and routes there are poorly known, but the revolutionary audio lure is enabling researchers to flesh out their movements in the eastern half of the country.

In the east, fall migration generally coincides with leaf-fall. Between approximately 43 and 38 degrees north latitude (from Cedar Grove, Wisconsin to Cape May, New Jersey), it peaks in mid- to late-October. Heaviest passage occurs on clear nights with west to northwest winds, especially after the passage of a cold front. Movement is diminished somewhat by winds or a full moon. Banders also have determined that adults tend to migrate a little earlier than juveniles, and females a bit ahead of males.

What we don’t know

Despite the ongoing efforts to study the Northern Saw-whet Owl, big questions remain unanswered, says David Brinker, a Maryland biologist and one of the top authorities on the bird. Brinker’s two main questions:

1. Why is the breeding population nomadic?

Most migratory birds return to the same place or vicinity every year to breed. Saw-whets, on the other hand, wander to wherever the prey is. “And that can often be a totally different place than the year before,” he notes. Related to that question is the basic breeding ecology of Northern Saw-whet Owls, much of which still eludes scientists.

2. What drives the irregularities of fall migration?

Banding success of saw-whets tends to go through good year/bad year cycles, with an occasional “super year” thrown into the mix. A banding station that nets 30 owls one year might band 75 to 80 the next. One possibility for the irregular migrations: breeding success rates. But that begs the question, why would breeding rates vary year-to-year?

Back at the camp
Setting up shortly after dusk, with the tooting prerecorded courtship call reverberating in the woods, we retreat to our banding lab for a quick hand of cards or slice of pizza. Every 30 or 40 minutes, we make the rounds to retrieve any owls caught in our nets on the Rouge River Bird Observatory (RRBO) site. Most saw-whets are found in the bottom portion of the nets, since they tend to fly low through the woods with a woodpecker-like bounding flight.

With only a few exceptions, the owls are docile as we extract them and transport them back to the lab to be banded, measured, and weighed. We can determine whether they are juveniles, young adults or older by examining the subtle differences in the colors of their flight feathers. Often we can ascertain the sex, since females are heavier and usually have longer wings than males.

A few minutes later, it’s time to let them go. We set an owl on an outstretched palm. Usually, it just sits there, wide-eyed and adorable. Moments, even minutes, may pass. Often, we need to give it a boost to prompt it to take off!

And so it goes at the RRBO until 1 a.m., longer if we can make it. Through similar efforts at more than two dozen stations in the Midwest east to the Atlantic coast, hundreds of saw-whets were banded in the autumn of 1999. Despite our modest efforts (only banding for part of 11 nights) and urban location in a Detroit suburb, the RRBO netted 20 owls. Stations capturing previously banded birds find out, through an e-mail network called Saw-whet Net and later via the federal government’s Bird Banding Lab, where owls were first netted, thus tracking the movements of dozens of birds.

This adds tremendously to our knowledge of migration routes and chronology. By all accounts, 1999 was an excellent year for saw-whets, with many owls moving south. Other years, such as 2000, were leaner, since variations in the magnitude of saw-whet owl migration are almost entirely due to breeding success and the subsequent number of juvenile owls on the move. 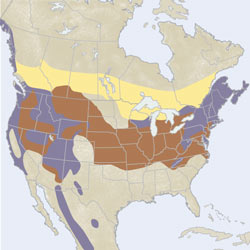 Young: Owlets hatch with eyes closed and cloaked in white down. Fledglings appear primarily brown. They have buffy underparts and white forehead markings.

Turning of the seasons
Most birders discover Northern Saw-whet Owls at their winter roosts, since non-breeding owls may use the same roost tree for weeks. They will seek out an area with good cover, as their main predators are larger owls. Solitary in winter, they will choose a roost in dense vegetation close to a tree trunk, often in a coniferous tree or tangled thicket. Saw-whet owls are fairly tame and tolerant, as long as they are not unduly disturbed. You may find them sitting on a snack. Since they can often make two meals out of a kill, they store spare food on a branch. To thaw it out, they squat right on top of it, giving the bizarre appearance that they are incubating a rodent!

Saw-whets begin migrating in late winter and early spring, depending on latitude. Fewer banding stations operate in the spring, so we know less about this leg of the journey. The saw-whets begin to leave Virginia in early March. Spring migration apparently peaks in mid-March in central Wisconsin and late March in New Jersey. There is no hard evidence that saw-whet owls return to the site of their birth to nest, but it looks as if some come back to the same general area to breed each year.

Courtship may begin as early as February. From high perches, the male toots away, most often singing right after sunset and just before dawn. Saw-whets often use old woodpecker holes (particularly those of flickers) for nest sites, but they also will use nest boxes.

The females probably choose the site, and also take care of all the incubating and brooding. Saw-whets lay five or six smooth white eggs at two-day intervals, and incubation takes 27 to 29 days. The males, meanwhile, do all the hunting, often bringing lots of extra prey. In addition to rodents, their small size and rapid flight allows saw-whets to catch insects and occasionally birds or bats.

When the young are about 18 days old, the female leaves the nest hole. She will either continue to care for the young along with the male, or go off on her own.

Some females may find another mate and renest. The youngsters leave the nest when they are about a month old. Unlike some other species of owls, fledgling saw-whets can fly reasonably well at this point, but receive parental care for another month. A bumper crop of babies means there are busy nights for owl-banders come fall.

Simply irresistible
Around midnight in late October, Jeff and I head back from the nets to the banding station. Campus security, used to seeing me at the other end of the day, stops us to find out what’s going on.

We explain what we’re doing to the burly, half-interested security guy, and then Jeff pulls an owl out of its holding bag. As he holds up the bird, I see the officer’s eyes widen and his face soften. Another tough guy succumbs to the irresistible charm of the tiny, wide-eyed saw-whet owl.

Julie Craves is supervisor of avian research at the Rouge River Bird Observatory at the University of Michigan Dearborn and a research associate at the university’s Environmental Interpretive Center.