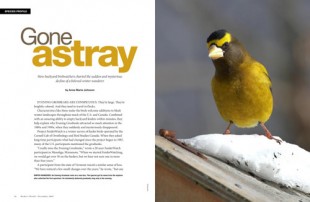 Evening Grosbeaks are conspicuous. They’re large. They’re brightly colored. And they tend to travel in flocks.

Characteristics like these make the birds welcome additions to bleak winter landscapes throughout much of the U.S. and Canada. Combined with an amazing ability to empty backyard feeders within minutes, they help explain why Evening Grosbeaks attracted so much attention in the 1980s and 1990s, when they suddenly and mysteriously disappeared.

Project FeederWatch is a winter survey of feeder birds operated by the Cornell Lab of Ornithology and Bird Studies Canada. When they asked long-time participants what had changed since the project began in 1987, many of the U.S. participants mentioned the grosbeaks.

“I really miss the Evening Grosbeaks,” wrote a 20-year FeederWatch participant in Menahga, Minnesota. “When we started FeederWatching, we would get over 30 on the feeders, but we have not seen one in more than four years.”

A participant from the state of Vermont voiced a similar sense of loss. “We have noticed a few small changes over the years,” he wrote, “but one that has always puzzled us is that when we started 20 years ago, Evening Grosbeaks were consuming 50 pounds of sunflower seeds per week, and now it has been several years since we have seen even one.”

Evening Grosbeaks are unpredictable migrants. Some winters, they remain within their breeding range, but in others, when food supplies are scarce, they leave, making wandering movements called irruptions. In the mid to late 1900s, the grosbeaks roamed from the boreal forests of northern Canada to southern Canada and the U.S. on a fairly regular cycle — irrupting every two or three winters. Sometimes the birds traveled as far south as Florida and Arizona.

Individual grosbeaks rarely returned to the same winter sites in subsequent years, especially in the east, as migratory birds often do. But sometimes a few Evening Grosbeaks stayed and bred in the area where they spent the winter, leading to an expansion of the species’ range.

The bills of Evening Grosbeaks turn grass-green in late winter and early spring, about the time females start soliciting food from males.

Laura Erickson, a frequent contributor to Birder’s World who is now the science editor at the Cornell Lab, observed Evening Grosbeaks at the feeders in her Duluth, Minnesota, backyard just about daily during the 1980s.

When fledglings visited the feeders in the summer, she noticed that the young birds begged from multiple adults with green bills — and successfully.

One young bird, Laura says, was fed by an adult female and three different adult males in quick succession.

Since Evening Grosbeaks eat primarily seeds, many observers believe that widespread planting of box elder trees, which hold their seeds through winter, encouraged an eastward range expansion during the mid to late 1800s. Evening Grosbeaks spread to the Atlantic coast by the early 1900s. By the 1920s, they were regular visitors to the east. Between 1969 and 1984, they were being reported on 50-85 percent of Christmas Bird Counts in Atlantic coast states.

In the late 1980s, however, the winter irruptions began to decline significantly. In recent years, the birds have rarely been reported south of North Carolina in the east or south of Montana, outside of the Rockies, in the west. And where the grosbeaks have been seen, their numbers have declined. Even in northern climates, they are growing scarce.

To quantify Evening Grosbeak population trends continentwide, Cornell Lab investigator David Bonter and Cornell University student Michael Harvey analyzed more than one million counts submitted by FeederWatch participants in the U.S. and Canada from 1988 through 2006. Because the birds are irruptive, dramatic changes in maximum counts are reported from one year to the next. To make sure they were assessing changes in overall population rather than annual variations, Bonter and Harvey divided the 18-year data set into three periods and averaged the maximum counts during each period. They looked for changes in flock sizes at sites that submitted at least 50 counts during the 18-year period.

The researchers detected a 27 percent decrease in average flock size between the first six-year period (1989-94) and the last (2001-06). The average flock size during the first six-year period was 11.8 birds and during the last period was 8.6. When Evening Grosbeaks were seen at feeders, project participants on average saw more individuals at one time from 1989 to 1994 than from 2001 to 2006.

Researchers Bonter and Harvey also looked at a subset of sites that had submitted counts for at least 10 years and had reported Evening Grosbeaks in at least three winters. They found significant declines at 76 of the 391 long-term sites. At no sites did they find an increase.

Where have the Evening Grosbeaks gone?

When Bonter and Harvey published their findings in the May 2008 issue of The Condor, the journal of the Cooper Ornithological Society, they were able to recount several theories for the decline but could provide no conclusive answers. The most likely cause appears to be a decline in spruce budworms combined with a shrinking boreal forest.

The spruce budworm is one of the most destructive native insects in the northern spruce and fir forests of the U.S. and Canada. It is also an important prey item for Evening Grosbeaks, which often appear for the first time or in unusual numbers wherever there is an outbreak of spruce budworm during the breeding season. Both the U.S. and Canadian forest services have sprayed pesticides since the 1970s to try to reduce budworm populations. Their success has coincided with the decline of the grosbeak, yet there is no proof that the decline in budworms caused the decline in Evening Grosbeaks.

Research also indicates that Evening Grosbeaks prefer to breed in forests that contain trees of varying ages, including some that are more than 100 years old. After older forests are harvested, it may take 100 years for newly planted, even-aged stands to become acceptable habitat. Furthermore, a significant amount of forest is cleared for development and never replanted. Climate change may also be jeopardizing Evening Grosbeaks, as boreal forests contract northward.

Once the 2007-08 FeederWatch data were analyzed, it became clear that although more Evening Grosbeaks had been reported than in recent years, the counts were still sharply lower than in the early years of the project. The analysis highlighted just how scarce the birds have become.

For too many people who feed birds, Evening Grosbeaks are but a memory. Asked to recall a memorable moment from her years of FeederWatching, a participant from Iowa described the year she had an invasion of Evening Grosbeaks: “Our trees looked like they were decorated with yellow ornaments.”

As the fall of 2007 demonstrated, some Evening Grosbeaks still irrupt occasionally, bringing memorable moments to a few bird-feeding enthusiasts. Let’s hope the birds brighten winters for many years to come.

Project FeederWatch participants observe their feeders over two consecutive days as often as every week from November to early April.

For each two-day count, they tally the highest number of each species that they see at one time and then send their tallies, along with weather and effort data, to Project FeederWatch over the Internet or on paper forms.