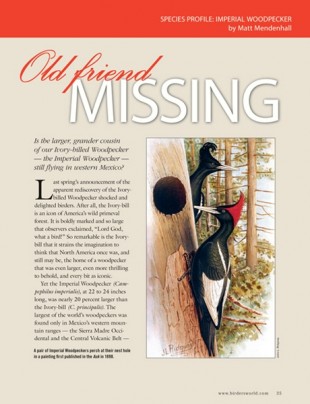 The announcement of the apparent rediscovery of the Ivory-billed Woodpecker shocked and delighted birders. After all, the Ivory-bill is an icon of America’s wild primeval forest. It is boldly marked and so large that observers exclaimed, “Lord God, what a bird!” So remarkable is the Ivory-bill that it strains the imagination to think that North America once was, and still may be, the home of a woodpecker that was even larger, even more thrilling to behold, and every bit as iconic.

Yet the Imperial Woodpecker (Campephilus imperialis), at 22 to 24 inches long, was nearly 20 percent larger than the Ivory-bill (C. principalis). The largest of the world’s woodpeckers was found only in Mexico’s western mountain ranges — the Sierra Madre Occidental and the Central Volcanic Belt — about 800 miles west of the western edge of the Ivory-bill’s historic range. Its population, like that of its eastern cousin, was probably never large. But unlike the Ivory-bill, the safest way to refer to the Imperial now is in the past tense. BirdLife International and the World Conservation Union, the worldwide authorities on threatened species, list the Imperial as “critically endangered (possibly extinct).”

The woodpecker occurred in pine-oak forests on plateaus at an average elevation of 8,400 feet (2,550 meters) above sea level. It looked a lot like the Ivory-bill — mostly black with brilliant white on the trailing edge of its wings, a pair of narrow white lines on its upper back, and a distinctive, handsome crest. The male’s was bold red. The female’s was black, and it curved strongly upward and forward.

The bird fed on beetle larvae that it extracted by scaling bark and excavating into the wood of standing dead pine trees and fallen trunks and roots. It excavated nest holes more than 65 feet high in dead pines. Breeding was recorded from February to June, the handful of nests reported contained one or two young, and immature birds were spotted between April and September. In the non-breeding season, Imperials were often seen in groups of five to eight or more birds. Past researchers suggested that the groups included adults, young of the year, and offspring from previous years. But the woodpecker’s life history was never studied thoroughly, leaving scientists to wonder about the true nature of its grouping behavior.

The Imperial’s range covered seven states in western Mexico. The northernmost record, from 1886 in the northeastern part of Sonora, is just 50 miles from the Arizona border. The woodpecker was reported most often just south of Sonora in Chihuahua and Durango, and less frequently in Jalisco, Michoacan, Nayarit, and Zacatecas. 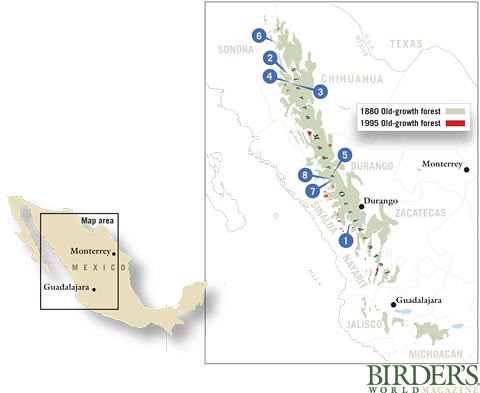 A search team in the 1990s documented eight credible Imperial Woodpecker sightings over the previous 30 years. The places and dates listed below are plotted in the map above.

Green areas on the map show the Imperial Woodpecker’s approximate range in 1880. The red areas are all that remained of its habitat in 1995.

Researchers have described the woodpecker as close to extinction for nearly 50 years. The last widely accepted records of Imperials came from southern Durango in 1954 and 1956. Ivory-bill researcher James Tanner and his son searched the area in 1962 but did not find Imperials. Unconfirmed sightings continued into the 1970s, including sightings that journalist and actor George Plimpton investigated and described in Audubon magazine in 1977.

Strong evidence that Imperials hung on beyond the 1950s came from a year-long investigation by woodpecker expert Martjan Lammertink, a member of the team that reported the Ivory-bill in Arkansas. Between November 1994 and October 1995, he and colleagues Jorge Rojas, Federico Casillas, and Roger Otto searched for the woodpecker, assessed forest habitat, and interviewed more than 60 local residents who had seen Imperials in years gone by. Sixty percent of them said they last saw the bird between 1946 and 1965, leading the researchers to suggest, in a 90-page report on the expedition, that this 20-year period marked the height of the Imperial’s extinction.

Lammertink’s team documented eight credible reports of Imperials from 1965 to 1995 (see map for locations) but did not find a bird. Most notable were females seen in 1990 and 1993 in northern Sonora (possibly the same bird); a pair seen in April or May 1993 in western Durango; and a male reported in March 1995 not far from the site of the 1993 Durango sighting.

In a small, old-growth pine-oak forest near the Durango sightings, Lammertink found abundant “workings” — excavations of pine snags and fallen logs — that, he wrote, “could be attributed only to a very large woodpecker.” In addition, most granary trees of Acorn Woodpeckers in the forest had been scaled, with large wood fragments removed. Five villagers Lammertink later interviewed claimed that Imperials “would plunder the acorns from the granaries of Acorn Woodpeckers.” Lammertink said it was “highly unlikely” that Pale-billed Woodpecker (C. guatemalensis), a relative that also occurs in western Mexico, stripped the trees. Pale-bills do not occur at the elevation or in the type of habitat where the trees were found.

He concluded his report by noting that two solitary Imperials, widely separated from each other, might have survived into the mid-1990s. However, “extinction of the species seems inevitable.”

In 2003, eight years after searching the Sierra Madre Occidental, Lammertink and other woodpecker experts learned of a credible sighting of a bird from 1996 in an “isolated, pristine canyon” near the previous Durango sightings. Roger Otto, a member of Lammertink’s earlier expedition, spent 16 days searching the canyon with a knowledgeable guide. The only physical evidence that an Imperial may have been around was a “curiously robbed granary tree, virtually identical to those found during the 1995 search,” and a snag that appeared to have been plundered several years earlier.

“Even if it was an Imperial that robbed these one or two trees, their isolated nature would point to no more than the survival of a solitary, widely wandering individual,” Otto wrote.

A few months after his investigation, BirdLife International downgraded the bird’s status to “critically endangered (possibly extinct),” adding that the Imperial “will not be listed in the extinct category until local or unconfirmed reports have been discounted, and adequate surveys have failed to find the species.”

There is always hope

The Ivory-bill’s apparent rediscovery after 60 years without proof of its existence suggests that no bird should ever be given up for lost. But the Imperial Woodpecker’s situation, even just a decade after credible reports, is notably different than that of its more famous relative.

“In the U.S.,” Lammertink says, “there are large protected areas where the quality of habitat has steadily improved over the past half century. And the poor rural populations that shot Ivory-bills around the turn of the century have now moved to cities.

“In Mexico, it is the other way around. There are no significant protected areas in the range of the Imperial Woodpecker. Forestry practices have intensified over time, and large numbers of people live in those forests. When they come upon an interesting target like a squirrel, turkey, deer, or Imperial Woodpecker, they pull the trigger. There is no enforcement of hunting regulations.”

Does the man who knows Imperials perhaps better than anyone else believe they’re still roaming remote forests?

“There is always hope, but realistically, there is a whole lot less hope for the Imperial than for the Ivory-bill,” says Lammertink.

On the other hand, a handful of surviving Imperial Woodpeckers could escape detection because very few birdwatchers go looking for them.