Each spring on the James River, a Chesapeake Bay tributary that runs through downtown Richmond, Virginia, Great Blue Herons engage in mating dances at rookeries just west and east of town. The heronries are likely remnants of a former rookery known as Pipeline Rapids.

The striking waterbird is a fixture in ponds, wetlands, coasts, and similar habitats from southern Alaska to northern South America. It may number as many as 5 million individuals, according to the International Union for Conservation of Nature.

At one time, however, it struggled like many other bird species in the mid-1900s. According to researchers at the Center for Conservation Biology (CCB) at the College of William & Mary in Williamsburg, Virginia, Great Blue Heron populations in the Chesapeake Bay region reached a low of one dozen known breeding colonies in the late 1960s, a result of the effects of DDT.

A half-century or so later, in 2013, a CCB survey of the birds documented 14,126 pairs in 407 breeding colonies in the Chesapeake; the species had become the most widespread and abundant breeding waterbird in the bay. At the time, Great Blue Heron rookeries along the James River near Richmond each hosted between 35 and 75 pairs. CCB is planning another survey of the Chesapeake’s waterbird species in 2023; the survey may include Great Blue Herons.

A decade ago, the biologists also found that some large Great Blue colonies that were stable for decades had started to splinter. Bald Eagles also have been recovering from DDT for decades, and they sometimes claim places to nest in heron rookeries. 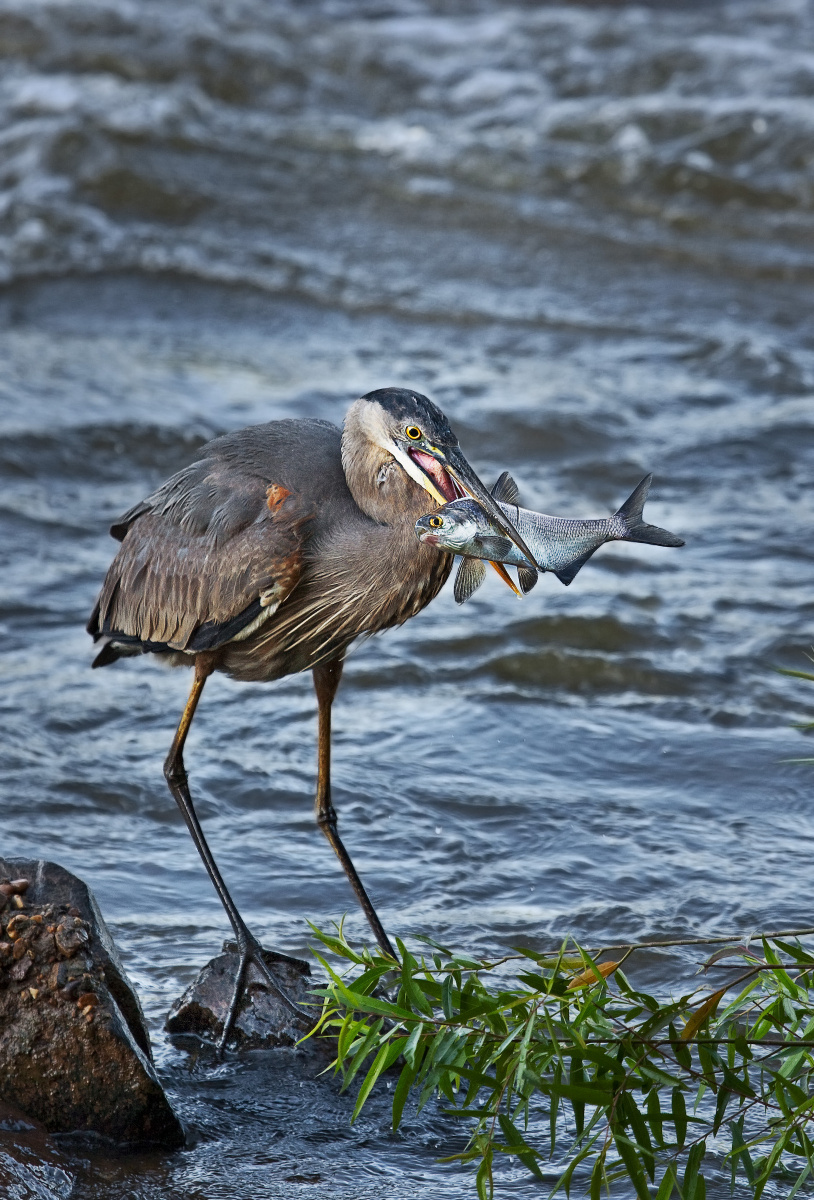 Great Blues are common on the shores of open waters and in wetlands across most of North and Central America, as well as the West Indies and the Galápagos Islands. The species is the largest North American heron. Its primary food is fish, although it opportunistically feeds on shrimp, crabs, aquatic insects, amphibians, reptiles, and smaller birds. Herons locate their food by sight and swallow it whole.

Great Blues usually dine solo, but on this run of the James River, dozens are often in view, standing on rocks in the river or wading in pools and riffles.

The birds build bulky stick nests, and females lay three to six pale blue eggs. Pairs raise one brood each year. Both parents feed the young by regurgitating food; adults consume four times as much when feeding chicks. The eggs are incubated for 28 days, and the nestlings fledge about 60 days later. Young birds are on their own by the middle of June.

On the James, Great Blues, along with Ospreys and Bald Eagles, feast on American shad in the river’s rapids. The herons stalk the shallows, their gray-blue feathers backlit in the morning sun.

The Richmond Great Blues have the best feeding spots on the river, local residents say. When shad splash their way upstream in spring, the herons can almost fall out of their nests to fish. Statue-still, the birds peer beneath the surface. Suddenly, their long necks jut forward to spear the catch of the day. A piscine flash of silver, and the meal is gone, sliding down a heron’s long throat.

Richmond’s Great Blues live the good life, for now. American shad are in decline along the James and throughout the Chesapeake Bay region. Shad abundance levels, according to the James River Association, a conservation organization, have reached an all-time low. Bringing back the fish will take protecting the river’s water quality and habitat, and addressing water withdrawal effects, predation by invasive species, and barriers to fish passage such as dams.

Whither go the shad, so, too, the Osprey, Bald Eagle, and Great Blue Heron.

The charismatic bird once numbered at least 150,000 on Oregon State campus; recent one-day high count was fewer than 1,500.

Study uncovers how Harris’s Hawks optimize their landing maneuvers for an accurate descent, prioritizing safety over energy or speed.

They urge designation of critical habitat, which feds claim would expose the species to threats from ‘overzealous birders.’