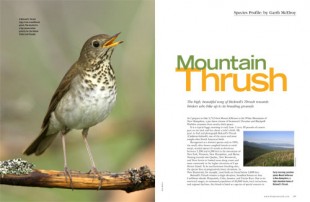 As I prepare to hike 5,712-foot Mount Jefferson in the White Mountains of New Hampshire, a pre-dawn chorus of Swainson’s Thrushes and Blackpoll Warblers emanates from nearby thick spruce.

It is a typical foggy morning in early June. I carry 30 pounds of camera gear on my back and face about a mile’s climb. My goal: to find and photograph Bicknell’s Thrush (Catharus bicknelli), one of the rarest and most sought-after North American birds.

Recognized as a distinct species only in 1995, the small, olive-brown songbird breeds in windswept, stunted spruce-fir stands at elevations between 2,200 and 4,200 feet in the mountains of New York, Vermont, New Hampshire, and Maine. Nesting extends into Quebec, New Brunswick, and Nova Scotia in limited areas along coasts and more commonly in the higher elevations of Cape Breton Island. At its northernmost breeding sites, the species lives at progressively lower elevations. In New Brunswick, for example, most birds are found below 2,000 feet.

Bicknell’s Thrush winters in high-elevation, broadleaf forests on four Caribbean islands: Hispaniola, Cuba, Jamaica, and Puerto Rico. Due to its restricted ranges, its estimated population of 40,000 birds, local extinctions, and regional declines, the thrush is listed as a species of special concern in Canada. And the conservation group Partners in Flight considers the bird one of the 28 North American landbirds most in need of conservation action to ensure survival. (For more details, see “A New Map” in our October 2004 issue.)

I file the details of the thrush’s tenuous grip on life in the back of my mind as the steep Caps Ridge Trail unfolds before me. As I hike, Yellow-bellied Flycatchers call, and Boreal Chickadees sing and flutter across the trail in front of me. After an hour and a half of slippery, rocky ascent, I arrive in a small clearing with a large area of ledge overlooking a fir-covered canyon in the shadow of Mount Jefferson. Dawn has broken, but the sun needs time to clear the mountain and burn off the fog.

The bird’s summer stronghold, according to habitat assessments by the Vermont Institute of Natural Science, is New Hampshire. In the United States, more than 40 percent of available breeding habitat for Bicknell’s Thrush lies in the Granite State. At least for now, the birds are relatively common in suitable habitat, making New Hampshire one of the best places to search for the species.

I set up my camera gear and hope to hear a bird singing through the fog. As with most other thrush species, the best time to listen for Bicknell’s is at dawn and dusk when it sings. The stunted firs at this elevation have been battered by harsh winters. Tall snags of dead and dying trees protrude above the live trees. Looking out over hundreds of acres of undisturbed woodlands, it is hard to imagine this habitat being under attack by an unseen enemy.

Pollution, in the form of acid rain and mercury, is significantly affecting the area. Coal-burning power plants in the Midwest create the toxins, and easterly trade winds carry them to the Northeast, where they are deposited by rain and snow.

A recent study by researchers in Vermont, Maine, and Canada found elevated levels of mercury in mountain birds, including Bicknell’s Thrush. Though we often think of mercury as a threat to fish-eating aquatic birds, such as loons and mergansers, the study leaves no doubt that songbirds are at risk as well.

In fact, a survey conducted by the Vermont Institute of Natural Science and the U.S. Forest Service documented a seven percent annual decline of Bicknell’s Thrush in White Mountain National Forest between 1993 and 2003. Pollution is not likely to be the sole cause, however, because climate change and habitat loss in the Caribbean are also working against the bird.

I wait patiently, paying close attention to the surrounding forest. Two Black-backed Woodpeckers probe for a meal in larger snags. A pair of Gray Jays looking for a handout visits me. Other abundant breeding birds on the mountain are Boreal Chickadee, Magnolia and Blackpoll Warblers, White-throated Sparrow, and Dark-eyed Junco.

After about an hour, I hear a faint chup chup chup on the slope below me. The fog is still fairly thick and I can’t get a clear view, but I recognize that unmistakable call note. As I squint to see the bird, it bursts into song, giving away its location on a weathered stub of spruce. Then, farther down the slope, another bird sings in response. Their beautiful flute-like song is a perfect fit for this foggy morning.

Seeing and hearing the bird is one thing, but getting a good photograph is another. The sun begins to burn through the fog, and the light levels climb. I position myself near an old spruce stump and gently “phish” a few times. It doesn’t take long for one of the birds to come and investigate the strange sound in its territory. The thrush lands on a small limb in front of me and sings. This is the moment I’ve tried for many, many times before, and I’m ready.

I furiously click my camera’s shutter. Each time I “phish,” the bird jumps to another perch close by and sings once or twice. Eventually, it decides that I am not a threat to be concerned with, and it retreats down the slope in silence. I am left with a camera full of images and a sense of “did that just happen?”

Garth McElroy is a bird and nature photographer from New Hampshire.

“Only a freak ornithologist would think of leaving the trails for more than a few feet. The discouragingly dense tangles in which Bicknell’s Thrushes dwell have kept their habits long wrapped in mystery.” So wrote pioneering Bicknell’s researcher George Wallace in 1939. Having spent considerable time trying to photograph the species, I can say that not much has changed. With the exception of a few high-elevation roads, it takes considerable hiking up steep trails to reach the elevations where the birds live.

Mountain weather: Always check the forecast before setting out. The weather at higher elevations can be unpredictable and much colder than at lower elevations. Snow and freezing temperatures are not unheard of in early June. Bring plenty of water and food (for you and for Gray Jays!), wear sturdy hiking boots, and dress in layers.

When to go: The last week of May through the first three weeks of June. The thrush remains on breeding grounds through mid-September or later but is more difficult to find.

Best time of day: Dawn and dusk, when the birds sing. In the first three weeks of June, when the birds are breeding, they sing throughout the day, making them more evident than the rest of the summer.

Where to look: Exposed ledges overlooking spruce-fir forests at elevations between 3,000 and 4,000 feet. Such sites give a perfect vantage point to scan for perched birds singing in the early morning or late afternoon.