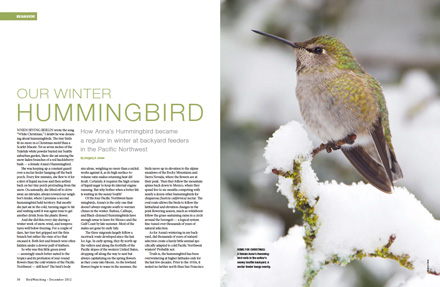 When Irving Berlin wrote the song “White Christmas,” I doubt he was dreaming about hummingbirds. The tiny birds fit no more in a Christmas motif than a Scarlet Macaw. Yet as seven inches of the Yuletide white powder buried my Seattle suburban garden, there she sat among the snow-laden branches of a red huckleberry bush — a female Anna’s Hummingbird.

She was keeping up a constant guard over a nectar feeder hanging off the back porch. Every few minutes, she flew to it for a shot of liquid sucrose and then settled back on her tiny perch protruding from the snow. Occasionally, she lifted off to drive away an intruder, always toward our neighbor’s feeder, where I presume a second hummingbird held territory. But mostly she just sat in the cold, turning sugar to fat and waiting until it was again time to get another drink from the plastic flower.

And she did this every day during a winter week of snow, wind, and temperatures well below freezing. For a couple of days, her tiny feet gripped not the thin branch but rather the rime of ice that encased it. Both feet and branch were often hidden under a downy puff of feathers.

So why was this little green jewel — seemingly much better suited to the tropics and its profusion of year-round flowers than the cold winters of the Pacific northwest — still here? The bird’s body size alone, weighing no more than a nickel, works against it, as its high surface-to-volume ratio makes retaining heat difficult. Certainly, it requires the high octane of liquid sugar to keep its internal engine running. But why bother when a better life is waiting in the sunny South?

Of the four Pacific Northwest hummingbirds, Anna’s is the only one that doesn’t always migrate south to warmer climes in the winter. Rufous, Calliope, and Black-chinned Hummingbirds have enough sense to leave for Mexico and the Gulf Coast by late summer. Most of the males are gone by early July.

The three migrants largely follow a racetrack route developed since the last Ice Age. In early spring, they fly north up the valleys and along the foothills of the Pacific slopes of the western United States, dropping off along the way to nest but always capitalizing on the spring flowers as they come into bloom. As the lowland flowers begin to wane in the summer, the birds move up in elevation to the alpine meadows of the Rocky Mountains and Sierra Nevada, where the flowers are at their peak. Then they follow the mountain spines back down to Mexico, where they spend five to six months competing with nearly a dozen other hummingbirds for chuparosa (Justicia californica) nectar. The oval route allows the birds to follow the latitudinal and elevation changes in the peak flowering season, much as wildebeest follow the grass-sustaining rains in a circle around the Serengeti — a logical system fine-tuned over thousands of years of natural selection.

As for Anna’s wintering in my backyard, did thousands of years of natural selection create a hardy little animal specifically adapted to cold Pacific Northwest winters? Probably not.

Anna’s Hummingbird (Calypte anna) was first described in 1829 by René Primevère Lesson, a French naval surgeon and naturalist. He collected the bird for the private collection of Prince François Victor Masséna, the 2nd Duke of Rivoli, and named it for the duchess of Rivoli, Anna de Belle Masséna.

Truth is, the hummingbird has been overwintering at higher latitudes only for the last few decades. Prior to the 1930s, it nested no farther north than San Francisco Bay and was not reported north of the Oregon border until 1944 (four years after publication of Ira Gabrielson and Stanley Jewett’s classic book Birds of Oregon, which said nothing about Anna’s). The bird reached Seattle in 1964 and today breeds on Vancouver Island and is found in southeastern Alaska regularly.

In their core, albeit historical, range in the Santa Monica Mountains of southern California, Anna’s can depend on species of currant or gooseberry to be flowering at any point in the year. The birds may have to move up- and downslope to catch the varied bloom, but for the most part, they don’t need to travel far to find flowers. They also begin breeding at the onset of winter rains to stay a step ahead of other species of hummingbirds and to time fledging to the peak of the spring currant bloom. So, if Anna’s have it all worked out in southern California, why the Grapes of Wrath-like immigration north?

Their journey north appears to have begun with the appearance, and then northward establishment, of another species: the blue gum eucalyptus (Eucalyptus globulus) from Australia. First introduced to southern California in the 1870s for shade, lumber, and railroad ties, and later used for lumber and orange-grove windbreaks, the tree is now naturalized in the coastal areas of southern California and the San Francisco Bay region. Areas of the state that were once treeless plains are now savannahs or long-abandoned plantations of blue gum.

The tree’s nectar-rich flowers bloom in the winter. Anna’s Hummingbird is one of only two native wildlife species that appear to find value in the tree. (As you can read in this PDF, Monarch butterfly, which uses it as a winter roost, is the other.) Taking advantage of a developing urban horticulture in the Los Angeles Basin, Anna’s found it could now live year-round in the lowlands of southern California and later move north to the Bay area as blue gum groves there matured. Ornithologists Joseph Grinnell and Alden Miller published The Distribution of the Birds of California in 1944. Because of the above factors, they wrote, the Anna’s 1940s population had greatly exceeded the original. The little mountain bird had become a common flatlander.

But blue gum trees aren’t common in Oregon and Washington, so why did Anna’s Hummingbird continue north? Part of the answer is hanging off my back porch. Nectar feeders in urban areas provide a super-rich food source. Why fly around licking dewy drops of nectar from scattered flowers full of bees when a whole quart of the stuff is just hanging there? It may not be entirely natural, but it is the same sucrose sugar that the hummingbird favors. And it is well worth defending.

Add to that the growth of some urban areas of the Pacific Northwest. Development has replaced the native conifer forest with incredibly rich and diverse garden flowers, many of which bloom earlier or later than native flowers, providing a longer plant-nectar feeding period for hummingbirds. Some flowers, such as winter jasmine, viburnum, sweet box, witch hazel, Oregon grape, and heather, even bloom in winter.

In their original southern California habitat, Anna’s Hummingbirds rely on chaparral and gooseberry, both with long growing seasons, but they readily forage on exotics provided by local nurseries. The birds have simply shifted north to capitalize on the profusion of urban gardens in the Pacific Northwest. The Seattle area’s locally large populations of eastern gray squirrels and American Crows have similarly adapted to the regional shift from conifer forest to the combined native and exotic deciduous trees.

How to care for overwintering Anna’s

Here’s what to do if an Anna’s Hummingbird chooses to stay in your yard this winter.

Do not adjust your sugar solution. Keep the ratio of sugar to water the same: 1 part white sugar to 4 parts water. Do not add dye.

Keep the solution from freezing. Rotate your feeders throughout the day, or experiment with heat sources: Seattle Audubon Society suggests stringing Christmas lights around or under your feeder, hanging a mechanic’s trouble light near your feeding station, taping a chemical hand warmer to the feeder, or wrapping plumber’s heat tape around your feeder.

Offer water. A heated bath can be a big help to all birds, including hummingbirds.

So why do Anna’s Hummingbirds stay the entire winter? It may simply be that they haven’t yet established a racetrack route comparable to the one perfected by other hummingbirds over eons. Alternatively, flying back down the urbanized lowlands to southern California during the late summer might carry them past too many dried-up flowers. You could get mighty hungry traveling to southern California if all the roadside cafes along the way were closed for the season.

Anna’s also take advantage of the hummingbird’s motto “When things get tough, the tough go to sleep.” A hummingbird in torpor can drop its body temperature from about 40°C to about 9°C (from 104°F to 48.2°F) and reduce its respiration rate from 245 breaths per minute to 6. It can even suspend its breathing for up to five minutes. The metabolic rate of an Anna’s during torpor can be 300 times lower than when in flight. The savings are significant; they can help a hummingbird sleep through a severe weather period.

A typical winter day might find an Anna’s sucking sugar, slowly turning it to fat, and then going into torpor during the night, living off the stored fuel. An Anna’s can gain 16 percent of its body weight during the day and then burn it all off during a cold night. (Imagine waking every morning 25 pounds lighter.) The fluctuation is extreme enough without adding the energetics of flight. Regardless of the season, awake and flying, a hummingbird is always just a few hours from starvation.

So, unless you are following a mountain migration route south that allows you to fly flower to flower as other hummingbirds do, it is best to keep your metabolic engine parked in the garage as much as possible. This is especially important if, during flight, your heart beats 1,260 per minute, by far the highest rate of any vertebrate. The alternative is running out of gas long before you reach the wintering grounds.

Anna’s Hummingbirds trying to survive a cold winter also have another item in their bag of tricks: They eat insects and spiders. They will hawk flying insects, glean tree hoppers from leaves, probe crevices for spiders, steal captured insects from spider webs, and pluck trapped insects from tree sap. And you can assume that even more insects and spiders await discovery in winter by hummingbirds that know where to look.

It is not just “supplemental” food, either. Hummingbirds need protein and don’t get it from a diet of nectar alone. One researcher calculated that, during the summer, a hummingbird needs to eat more than 30 small flies per day. How much protein a bird requires during the winter is unknown, but it may be less, especially if it is more sedentary or more adept at finding insects than we imagine. (Hummingbirds will also suck the sap from sapsucker woodpecker holes to supplement their sugar needs.)

Regardless of how Anna’s Hummingbirds survive the winter, they have now become year-round residents in the urban areas of the Pacific Northwest, along with our local towhees, chickadees, and juncos. They are the new iridescent green ornaments on our Christmas tree, and they no longer look so out of place in my winter garden.

Gregory A. Green is a wildlife ecologist and photographer. He has served as associate editor for Northwestern Naturalist, Journal of Wildlife Management, and Herpetological Conservation and Biology and has written for Natural History and other magazines.

Engaging and delightful 20-minute documentary highlights an old tree stump that attracts falcons, owls, hawks, and other raptors in winter.

The good news, says a BirdLife International scientist: ‘If we give nature a chance, it can recover.’