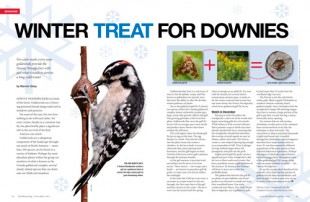 Downy Woodpeckers are birds of the forest. Goldenrods are a flowering perennial found along roads and in meadows and pastures.

For most of the year, the two have nothing to do with each other. Yet every winter, thanks to a common tiny fly, the plant briefly plays a significant role in the survival of the bird.

And you can watch.

Goldenrods are a ubiquitous component of the landscape throughout much of North America — more than 100 species can be found in a variety of habitats. Perhaps the most abundant plants within the group are members of what is known as the Canada goldenrod complex, several closely related species that can dominate our fields and meadows.

Goldenrods play host to a vast array of insects, but the aphids, wasps, and flies known as gallmakers are special, since they have the ability to alter the developmental pathways of plants.

One is the goldenrod gall fly. It attacks two species within the Canada goldenrod complex almost exclusively, producing a large, tumor-like growth called a ball gall. The growing gall takes a toll on its host plant. Goldenrods that carry the gall-fly larvae will, on average, grow more slowly and produce fewer flowers than those without the affliction.

The cycle begins when the female gall fly lays an egg on the host. The egg hatches in a week. Then the larva bores into the plant tissue and creates a chamber. As the larva feeds, it secretes chemicals that mimic plant growth hormones, and the gall begins to form. Growth of the larva and its gall continues through the summer months.

As the gall matures, it provides food and shelter, but the larva is far from secure. Three insects — two wasps and a beetle — are known to parasitize gall-fly grubs. In some years, few larvae outlive the onslaught.

In the early fall, if the larva survives, it excavates an escape tunnel to, but not through, the thin outer layer of the gall and then returns to the center. The larva won’t use the tunnel until the spring, when it emerges as an adult fly. For now, with the tunnel exit covered and its summertime enemies gone, it settles in for the winter, unaware that it must face one more threat: the Downy Woodpecker, which loves goldenrod gall-fly larvae.

Watch in December
Starting in early December, the woodpecker comes out of the woods and begins searching galls for exit tunnels. While failure to find a tunnel indicates that a parasitic wasp or beetle may have already attacked the larva, meaning that the woodpecker should look elsewhere, discovering a tunnel signals an easy-to-obtain, calorie-rich meal. The Downy creates a cone-shaped opening big enough to accommodate its bill. Then it plunges its long, barbed tongue down the passageway and pulls out the grub.

Highly prized gall-fly grubs can be a significant part of the wood­pecker’s diet for two or three weeks each winter. But heavy predation causes rapid depletion of the resource. By January, the Downies will have to move on to other less profitable foods.

The goldenrods that host the gall fly are plants of open habitats, and woodpeckers are reluctant to wander far from their woodland home. One study conducted near Ithaca, New York, found that woodpecker use of goldenrod galls located more than 25 yards from the woodland edge was zero.

The Downy is not the only bird to utilize galls. Black-capped Chickadees in southern Ontario routinely attack goldenrod galls. Since chickadees lack the woodpecker’s larger bill and long tongue, they have to remove a large portion of the gall to get their reward, leaving a characteristically messy opening.

For reasons that are still unclear, chickadees in other parts of the continent have not learned how to do this; the technique is observed rarely. The researchers in Ithaca examined thousands of galls and found only a handful damaged by chickadees, and investigators elsewhere have made similar observations. It’s not that unusual for different populations of the same species to have different behavioral repertoires. Perhaps this aspect of chickadee natural history has been exaggerated. Throughout most of the goldenrod gall fly’s range, it has only one major predator in winter — the Downy Woodpecker.

To see the woodpecker’s handiwork for yourself, visit a field that has patches of goldenrod and adjacent woodlands, and look for galls. Conduct your own survey. It can be a fun wintertime activity!

Warren Uxley is a naturalist for the Crawford County Park District in Ohio.