The Messenger, a new documentary about threats to the world’s songbirds, is receiving a lot of buzz — and for good reason.

The movie chronicles the struggle of songbirds to survive in environmental conditions made turbulent by humans. The issues that it covers — predation by cats, window collisions, illegal hunting and trapping, pesticides, shade-grown coffee, energy development, and climate change — will be familiar to birders. We’ve covered them all in the pages of BirdWatching and here on our blog. If this film opens the eyes of a much wider audience, then I say, “Bravo!”

Ancient cultures viewed songbirds as messengers from the gods. Today, the film argues, birds are delivering an urgent message about Earth’s health — one that we ignore at our peril.

The entertainment magazine Variety points out that The Messenger “lacks the unifying emotional and narrative involvement of the best nature documentaries,” but that didn’t bother me. As I watched, it was clear that director Su Rynard decided to focus on birds, as if to remind us that warblers, thrushes, and buntings are amazing and beautiful, and we need to pay attention to what’s happening to them. 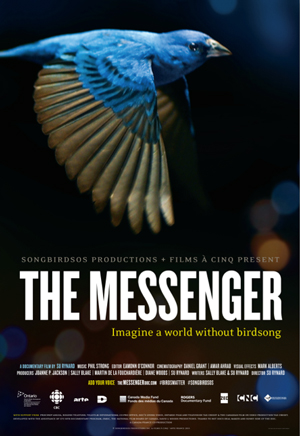 To speak for her subjects, Rynard interviews several leading ornithologists, including Bridget Stutchbury, a biology professor at York University and the author of the 2007 book Silence of the Songbirds; Peter Marra, director of the Smithsonian Migratory Bird Center; Bill Evans, an expert in the study of nocturnal bird migration; and Andrew Farnsworth, a researcher with the Cornell Lab of Ornithology.

Visually, the film is stunning. We see Indigo Buntings, Blackburnian and Black-throated Blue Warblers, and other birds flying in slow motion against a black background — scenes that were shot in an avian research center’s artificial wind tunnel. And Rynard and her team do not shy away from showing dead birds (victims of window strikes), cats preying on backyard birds, and other disturbing images.

As the credits roll, viewers are encouraged to visit the film’s website, songbirdsos.com, which lists ways they can make a difference.

Given how honest the movie is about the threats, I’m surprised that it doesn’t paint a broader picture on two issues.

First, The Messenger travels to France, where we learn about the illegal hunting and trapping of Ortolan Bunting for what some benighted Europeans consider a gourmet dish. Left unsaid is that hunting and trapping occurs throughout the Mediterranean region, causing the deaths of 25 million birds annually, and of hundreds of species, not just one.

Later, the filmmakers visit Canada’s boreal forest to describe the impact of oil drilling and related energy development on bird habitats. It’s a powerful moment. As University of Alberta biologist Erin Bayne describes a vast spider’s web of pipelines, drilling platforms, and other pieces of equipment, we are shown a map of a fractured landscape.

No one, however, mentions the phrase “tar sands.” It’s a surprising omission, considering that the proposed Keystone XL pipeline would carry oil from the boreal to the Gulf coast. The pipeline has been a political football for years, yet its connection to birds isn’t made in the film. (To learn about the very real threats of tar-sands development, see this report from the Boreal Songbird Initiative.)

These quibbles aside, The Messenger is an important and long-overdue documentary. Here’s hoping it does for songbirds what The Cove did for dolphins and what Blackfish did for killer whales.

The Messenger debuted in 2015. It is currently available on streaming services. You can learn more about the film at sosbirds.com.

Read more about the issues raised in the film

Canadian and U.S. studies agree: Cats are the most lethal threat to birds.

The true cost of coffee: How your morning cup of joe can help save birds.

Champions of the Flyway race puts spotlight on illegal trapping in Cyprus.