Become a member and get exclusive access to articles, contests and more!
Start Your Free Trial
BirdWatching  •  News & Features  •  Science  •  The house effect 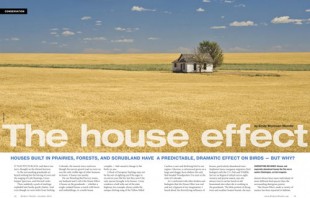 It was pitch black, and dawn was just a thought on the distant horizon.

In the surrounding grasslands we heard nothing but the lowing of cows and the singing of Lark Buntings, Grass­hopper Sparrows, and Horned Larks.

Then, suddenly, a pack of starlings exploded into hurdy-gurdy chatter. And even though we were miles from Sterling, Colorado, the nearest town, and even though the narrow gravel road we were on was the only visible sign of other humans, we knew: A house was nearby.

On our Breeding Bird Survey routes, my husband and I call it the House Effect. A house on the grasslands — whether a single, isolated house, a ranch with barns and outbuildings, or a multi-house complex — had caused a change in the birds we saw.

A flock of European Starlings may not be the sort of sighting you’ll be eager to record on your life list, but they aren’t the only species brought in by houses. A tiny residence a half mile east of the state highway, for example, always yields the unique clicking song of the Yellow-billed Cuckoo, a rare and declining bird in our region. Likewise, a cottonwood grove on a large and shaggy farm shelters the only Red-headed Woodpeckers I’ve seen in the state of Colorado.

As I confirmed with other birders and biologists that the House Effect was real and not a figment of my imagination, I heard about the diversifying influence of houses, particularly abandoned ones. Stephanie Jones, nongame migratory bird biologist with the U.S. Fish and Wildlife Service in Region 6 (which serves eight western and prairie states), says she always tries to eat her lunch at old homestead sites when she is working in the grasslands. The little pockets of dying trees and weather-beaten boards, she says, almost always have more individuals of more different bird species than the surrounding shortgrass prairie.

The House Effect, under a variety of names, has been reported in habitats ranging from Arizona desert to estuary marsh, from oak savanna to hardwood forest. In many cases, a house causes a spike in the number of species you can see at a particular location.

Bird experts warn, though, that the diversity doesn’t always tell the whole story. New habitats and new bird species can displace smaller, shyer, more specialized species. Many factors can cause a house to have an effect, including the habitat in which it is located and the habits of its residents.

Colorado grasslands
In the achingly barren shortgrass prairie of the western Great Plains, a house, even a long-abandoned one, often provides the only vertical structure for miles. Birds that like to forage or nest in more elevated locations flock to these areas, as do cavity-nesting birds, like starlings and swallows. Houses also frequently provide water as well as different shrubs, trees, and forbs than occur in the surrounding grasslands — and different vegetation means different seeds, different insects, and different nesting substrates. All of these elements, says Colorado ecologist Buffy Lenth, provide opportunities that the “smaller grassland birds just don’t exploit” but other birds, often more competitive or aggressive, do.

What seems to drive the smaller birds away the most, Lenth says, is not the house so much as the surrounding non-native vegetation.

“The little grassland sparrows really keyed in to the native bunchgrasses,” she says, referring to various grasses that don’t form a sod or mat but grow in tufts or clumps. “If you didn’t have the bunchgrasses, you wouldn’t find these species, either.”

She acknowledges that houses in the grasslands tend to bring in a greater diversity of birds. Many of the home­owners she works with tell a similar story: “Birds just love my house,” they say in excitement. “When we moved in, there were just a few little brown birds, and now there are so many birds, and so many different kinds!”

Unfortunately, she points out, the little brown birds that get pushed off by the new species tend to be the more sensitive, specialized species, like Grasshopper or Vesper Sparrow. The greater bird diversity of the new, house-dominated landscape, she says, “is not necessarily a good thing for the native bird community.”

Range: Breeds in open grasslands ­primarily from the Rocky Mountains to the East Coast; winters in southeastern states and Mexico.

Habits: Nests and forages on the ground, eating mostly insects, especially grass­hoppers. Nest is a well-concealed, domed cup of grass.

Status: No. 10 on Audubon’s list of Common Birds in Decline.

Wisconsin hardwood forest
A house built in the hilly, second-growth forest of central Wisconsin produces a similar spike in diversity, says Mike Mossman, a forest-community ecologist with the Wisconsin Department of Natural Resources. The local bird community will go from mostly small, shy, forest-interior species, such as Cerulean Warbler and Acadian Fly­catcher, to a range of edge species and even grassland birds.

The new birds may include species adapted to native habitats like savanna and prairie groves, such as orioles and kingbirds; cliff and hollow-tree nesters like Barn Swallow, Eastern Phoebe, and Chimney Swift; and edge-adapted species like Cedar Waxwing, Indigo Bunting, and Northern Cardinal.

If the clearing made for the house is modest and the landscape is planted with native shrubs and saplings, it may be used by native forest-opening species like American Redstart, Blue-winged Warbler, and Gray Catbird. If the clearing made for the house is large, Common Grackle, American Robin, and Brown-headed Cowbird may appear. If the owners have planted ornamental conifers, there may be Chipping Sparrow, Mourning Dove, and House Finch. A house with livestock will attract exotic birds adapted to human agricultural activity, including European Starling, House Sparrow, and Rock Pigeon.

In other words, a house in the forest may well have a more diverse assortment of species than existed before — but the sensitive deep-woods species will be gone.

What causes the House Effect in the forests of the Midwest is different than what causes it in the grasslands — and also less dramatic. As pointed out by Mossman and Adrian Lesak, a doctoral student in the Department of Forest and Wildlife Ecology at the University of Wisconsin-Madison, the main habitat change associated with a house in the forest is the opening of the canopy — which happens in undisturbed forests as well. A house that mimics the clearing caused by the fall of a big tree, for example, will have a bird community similar to that of a natural clearing.

Other aspects of the House Effect seem to persist in all environments. Keeping livestock, even chickens, proves a bonanza to exotic human-adapted birds — just the sort that birders aren’t likely to be interested in. Having a free-roaming cat affects the local birds, as readers of Birder’s World are well aware. Garbage and compost heaps attract raccoons, skunks, and other predators, and birds attracted to large grassy clearings can be predatory, too; Common Grackles and American Crows will eat the eggs and fledglings of other birds. And the number of Brown-headed Cowbirds nationwide has surged as fields and houses eat into formerly impenetrable forest.

The existence of the canopy seems to be the critical variable for many birds. Mossman notes that Acadian Flycatcher, a forest-interior species, has been found nesting in Wisconsin along rural roads where the trees touch, or nearly touch, overhead. As soon as the vegetation is cleared, the flycatcher vanishes. And road widening and improvement are the inevitable consequences of house construction in an area. If it’s possible to build houses closer together so that larger pieces of undeveloped forest are left intact, he says, the overall forest-bird community fares much better.

Range: Breeds in the central Midwest from the Great Lakes to the Appalachian Mountains and the coast of Massachusetts; winters in northern South America.

Habits: Makes its nest high in the canopy in mature deciduous forests; gleans insects from the upper twigs and branches of mature trees.

Rocky Mountain shrubland
The effect of houses erected in shrubby scrubland, such as western sagebrush or California oak, often falls somewhere between that of houses built in forests and plains. Houses in the sagebrush tend to bring in House Wrens, American Robins, various species of swallow, American Kestrels, orioles, and phoebes. (Robins, says Kim Potter, a biologist with U.S. Forest Service, like a “little more structure than just sage.”)

The houses also bring in nest-­parasitizing cowbirds and nest-predating Black-billed Magpies. Interestingly, researchers found that houses in this habitat had an effect even when the occupants didn’t change the vegetation, have animals, or use birdfeeders. Eric Odell, an ecologist with the Colorado Division of Wildlife, notes that his studies suggest that isolated houses in the Colorado oak scrub affected bird communities even if no one lived there.

When I ask why this might be, he describes the oak scrub habitat: “Gambel oak is rugged, dense stuff. It’s very difficult to move through.” Even if a house doesn’t change the vegetation, it breaks up this protective environment. Bigger generalist species move in — American Robin, Red-winged Blackbird, American Crow — and seemingly on cue, the littler birds move out — Blue-gray Gnatcatcher, Orange-crowned and Virginia’s Warblers.

No one is quite sure why the species change occurs: Are the littler birds sensitive to or subject to aggression from the larger birds? Are they outcompeted for food or other resources? Or are they simply sensitive to the increased light, temperature, and wind that occur along the outside edge of a patch of oak brush?

Whatever the cause, Odell emphasizes, the result is clear:

Houses, even single houses that integrate well into the landscape, cause a displacement of bird species.

The building of a house in any region creates new habitat, bringing water or vertical height where none existed before, for example, or creating grassland where forest used to be. It is this diversification of habitat that causes a diversification in the bird community.

The best way to combat the change, Odell notes, is to leave large stretches of the original habitat undisturbed.

Range: Breeds in the Colorado Plateau region, in rocky canyons covered with oak and pinyon pine; winters in Mexico.

Habits: Nests on ground; forages throughout the oakbrush for insects.

Status: Included on 2007 Audubon WatchList due to declining habitat, potential sensitivity to global warming, and tendency to fall victim to Brown-headed Cowbird parasitism.

Species change in the forest interior

Emily Wortman-Wunder is a former biologist who writes about science and nature. Her work has appeared in Montana Outdoors and other publications. Originally Published August 20, 2010

Only 9 percent of more than 900 birdwatchers said that they buy bird-friendly coffee.

Missouri’s open pine and mixed-pine woodlands are home once again to the Brown-headed Nuthatch thanks to a conservation partnership.

Its sky dancing courtship display is just one of the incredible behaviors of this shorebird that’s found in the woods.