While most animals don’t learn their vocalizations, everyone knows that parrots do — they are excellent mimics of human speech. But how large is the vocabulary of different parrot species? Do males “talk” more than females? Does a parrot’s vocabulary expand with age? A new study published December 5 in the Nature journal Scientific Reports, titled “A survey of vocal mimicry in companion parrots,” adds to what we know about animal vocal learning by providing the largest comparative analysis to date of parrot vocal repertoires. 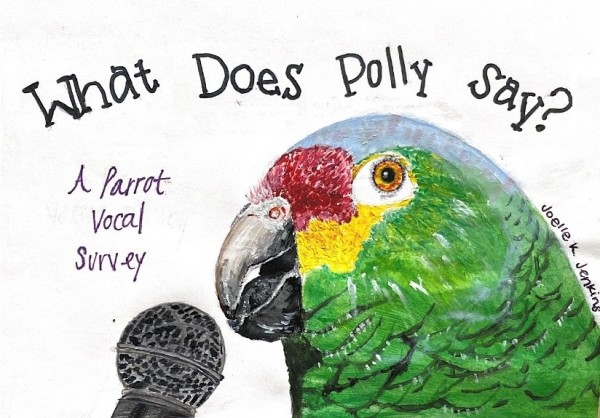 The paper documents species differences in vocal mimicry, shows that many parrots use words in appropriate contexts, and highlights the value of crowd-sourced data.

Data were collected as part of a community science project entitled “What does Polly Say?” Humans who live with companion parrots reported on the number of human “words” and “phrases” used by their parrots, as well as human-associated sounds (such as whistling a tune) and contextual use of sounds. This approach allowed researchers to collect standardized data on vocal learning by nearly 900 parrots from 73 species, a sample that would have been impossible to gather on wild parrots.

Species matters — “As it turns out, Polly’s species might have a strong impact on what she says,” said co-author Lauryn Benedict, professor and associate director of UNC’s School of Biological Sciences. Some species are much better mimics than others. African Grey Parrots, long understood to be the best at learning human sounds, were found to have the largest repertoires, averaging about 60 human words. Cockatoos, amazons, and macaws also were excellent mimics, with average repertoires of 20-30 words. Most species learned more phrases than sounds, but a few, including cockatiels and Fischer’s Lovebirds, learned more human sounds than phrases.

Learning over time — The study concludes that age and sex are weak predictors of vocal mimicry. Age-based analyses showed that juveniles expanded their repertoires until they reached maturity, but after that repertoire sizes reached a plateau. Fifty-year-old birds did not have larger repertoires than 5-year-old birds.

Males versus females — Sex-based analyses showed that males and females of most species were equally good mimics. There are, however, some exceptions, including Budgerigars, in which males had larger vocal repertoires, Pacific Parrotlets, among which only males were reported to “talk,” and Yellow-headed Amazons, among which females learned more sounds.

Although most males and females were equally good human mimics, the researchers documented a reporting bias whereby birds of uncertain sex were more often marked as male (74%). They conclude that humans who live with parrots of uncertain sex overwhelmingly, and often mistakenly, assume those birds are male.

Parrots have timing — Human survey-takers reported that a very high proportion of companion parrots (89%) spontaneously used human mimicry in appropriate contexts, with most birds doing so frequently. The researchers conclude that parrots learn both what to say, and when to say it.

“This research highlights just how much parrots still have to teach us,” said co-author Christine Dahlin, associate professor of Biology from UPJ. “Approximately 30% of parrot species in the wild are declining to the point of being threatened, endangered or critically endangered, primarily from poaching and habitat loss. Without conservation of remaining populations, we risk losing the opportunity to understand the evolution of complex communication in these amazing animals.”

As vocal learners, parrots are important research subjects for understanding the physiological, neurobiological, and evolutionary underpinnings of acoustic communication in nature. It is clear that both companion and wild parrots use vocal mimicry to navigate their complex social and cognitive worlds. The species and sex specific differences documented by this research can spur new avenues of research and lead to increased appreciation for parrots.

Anyone who lives with a parrot is invited to join the community science team and contribute to this ongoing research by filling out the survey at this link: https://bit.ly/2S7nx3K.

Learn more about parrots known for their large repertoires:

Chickadees, wrens, and other small songbirds work together to mob predator owls, but they only strike when the time is right.