The lead article in “Birding Briefs” in our just-published August issue describes the effects of climate change on the timing of Ruby-throated Hummingbird migration. It is one of several stories we’ve published describing how birds are responding to the warming climate.

Today the National Wildlife Federation issued a report on the dramatic and ongoing effects climate change is having on bird ranges and migrations across North America. 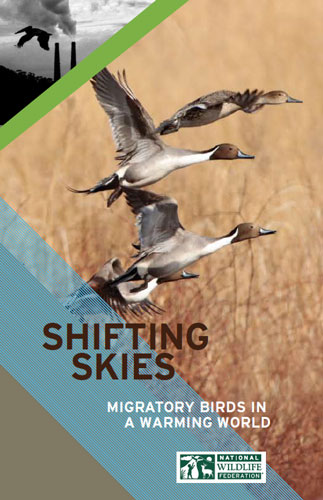 “From waterfowl to songbirds to shorebirds, the climate crisis is the most serious threat this century facing America’s migratory birds,” said Larry Schweiger, president and CEO of the National Wildlife Federation.

The report gathers together the results of many studies whose results support such a conclusion. Among the findings:

• Bird ranges are shifting and in some cases, contracting. No fewer than 177 of 305 species tracked have shifted their centers of abundance during the winter northward by an average of 35 miles in the past four decades.

• In the West, non-native cheatgrass, an invasive plant that provides ready tinder for wildfires, is displacing the sagebrush that Greater Sage-Grouse requires. Plus, warmer temperatures are allowing mosquitoes into higher elevations where sage-grouse occur. Due to the effects on habitat and the increasing probability of exposure to the West Nile virus, carried by the mosquitoes, “the most suitable areas for sage-grouse are projected to be in high elevation sagebrush habitats of southwestern Wyoming.”

• Coastal wetlands and beach habitats, home to birds like King Rail and Piping Plover, are disappearing, inundated by sea-level rise.

• Pests and disease, such as mountain pine beetle epidemics that have devastated many western forests, are increasing. The avian victims include tanagers, flycatchers, warblers, and other species that require mature healthy forests.

• In the mountains of the northeastern U.S. and southeastern Canada, “the balsam fir and red spruce favored by Bicknell’s Thrush in these forests are declining and expected to continue to decline as climate change advances.” According to the report, a 5-6 degree F increase in July temperatures, “consistent with expectations given current trends in carbon pollution, could result in loss of nearly 90 percent of its habitat in the United States.”

• Changing precipitation patterns are reducing breeding habitat in the Midwest’s prairie pothole region, known as “America’s duck factory.” Many species may be harmed, including Mallard and Northern Pintail.

• Two spring spectacles — Red Knots stopping over on Delaware Bay and hundreds of thousands of Sandhill Cranes passing through Nebraska’s Platte River — are also at risk. Climate change appears to be throwing off the timing of knot arrival and horseshoe crab egg laying on the East Coast. And reduced snowpack in the Rocky Mountains and earlier snowmelt are expected to reduce flow and change the timing of spring flows on the Platte.

“From backyard wildlife watchers to hunters in their duck blinds, unless we take action now, Americans across the country are going to be asking, ‘What happened to all the birds?’” said Alan Wentz, retired chief conservation officer of Ducks Unlimited and current board member of the Theodore Roosevelt Conservation Partnership.

“We know the steps we need to take to safeguard not just birds but all wildlife, our communities, and current and future generations of Americans from climate change. Now it’s time for action.”

For more information, including the steps NWF says are necessary to slow the effects of climate change, we encourage you to read the full report. — Matt Mendenhall, Managing Editor