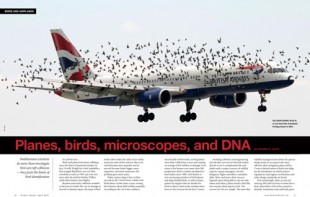 Birds and planes have been colliding since the dawn of powered aviation. In fact, Orville Wright hit a bird, probably a Red-winged Blackbird, over an Ohio cornfield as early as 1905, not even two years after he and his brother Wilbur made their historic first flights.

Because most early collisions resulted in the loss of a bird’s life, not in damage to aircraft or human injury, the issue of bird strikes flew under the radar of air-safety teams for most of the century. But as air travel became more popular, and as aircraft became faster, bigger, more expensive, and more numerous, the problem grew more acute.

Today, experts figure that civilian aircraft in the United States collide with birds about 35,000 times a year, costing the industry about $620 million annually. According to the Air Force, military aircraft add to both totals, striking birds more than 5,000 times a year and causing an average of $35 million in damage. Even worse is the human cost: more than 200 people have died in crashes attributed to bird strikes since 1988. And thanks to ever-increasing numbers of both planes and large-bodied birds, as well as faster, quieter jet engines that are harder for birds to detect, bird-strike numbers have been on the increase for the last 15 years.

Avoiding collisions and engineering aircraft that can survive the bird strikes that do occur is complicated, life-and-death work, a major concern of wildlife experts, airport managers, aircraft designers, flight controllers, and pilots alike. More and more, their success depends upon being able to say not only where and when a plane struck a bird but also exactly which species it hit. The reasons for this are simple: The more that wildlife managers know about the species being struck at an airport, the more effective their mitigation plans will be. Correct identification of birds also helps lay the foundation on which airport regulations and engine-certification and other design standards are based.

Not surprisingly, when an aircraft moving 100 miles an hour or faster hits a bird, often little is left of the animal to identify. Sometimes only odd body parts or feathers are picked up from a runway or wiped off a wing or nose cone — too little for even knowledgeable birders to say which species was involved.

Fortunately, there is an organization that specializes in identifying seemingly unidentifiable birds, a research institution with access to hundreds of thousands of specimens for comparison and equipped with the highest of high-tech tools — the Smithsonian Institution’s Feather Identification Lab.

Located within the walls of the National Museum of Natural History in Washington, D.C., the lab is the destination of a steady stream of packages sent from all over the world, about 10-12 a day. Each contains birds, or the remains of birds, most of them struck by U.S. Air Force aircraft. (For the military, sending remains to the Smithsonian is mandatory. For civilian aviators, it’s voluntary.)

The remains arrive in one of three forms: partial carcasses and whole feathers; feather fragments; or small admixtures of blood, tissue, and downy fluff. Carla Dove, the lab’s aptly named lead researcher, refers to the goo, usually little more than smears of blood on paper toweling, as “snarge.”

After most bird-plane collisions, enough whole-feather material is collected for Dove and her colleagues to identify the species using techniques familiar to every birder: They examine the size, shape, pattern, color, and texture of the feathers. Then the researchers compare the feathers with pictures in field guides and specimens from the Smithsonian’s extensive collection.

The National Museum of Natural History maintains the third largest bird collection in the world — more than 620,000 specimens, some of which date back to the 1800s, representing about 80 percent of all known bird species. The collection resides in row upon row of metal cases stacked almost to the ceiling of a huge room on the top floor. Because of it, Feather Lab researchers can identify whole-feather material to the species level 93 percent of the time.

In instances where only feather fragments are collected, Dove and her team work not just as birdwatchers but as forensic ornithologists, too. That is, they use microscopes to study each feather’s microstructure, and especially the fluffy barbs that are located at the base of most body feathers. Checking them against the lab’s reference set of 2,400 microslides, the investigators can often assign a sample to a bird order or family, information that sometimes makes it possible to locate an exact match in the museum’s specimen collection.

As the amount of feather material decreases, the difficulty of making an accurate identification increases. But it’s not impossible, as Dove wrote in an Air Force publication in 2004. “Smelly by nature and often packed with mold spores, gooey bird fat, or amorphous bits of flesh, ‘snarge’ can provide valuable information about the species of birds your aircraft just smacked.”

Despite initial impressions to the contrary, snarge often contains minute pieces of feathers that can be discovered through painstaking, patient searching and then studied under a microscope. And even when a towel swipe lacks such feather bits, it may still contain the ultimate clue to a bird’s identity — its DNA. If a sample holds enough viable molecular material, Dove and her colleagues can extract it and analyze it using cutting-edge laboratory techniques. The result is a genetic sequence, or DNA barcode, that describes one species and one species only. But which one?

To find out, Dove and her team consult an extraordinary new library, part of the ambitious international Consortium for the Barcode of Life initiative. Completed for the birds of North America in 2006, the collection contains not books, but DNA sequences for 96 percent of the bird species found in the United States and Canada.

“It’s not easier, it’s not cheaper, and it’s not faster,” Dove says of DNA sequencing, and it was never expected to replace feather identification, but it is effective. The technique has improved the lab’s overall ability to identify birds to the species level by 30 percent.

“DNA barcoding has added a new dimension to the identification of bird-strike evidence in the Feather Lab,” Dove says. “This is a new tool in our box of tricks to identify bird remains, and so far we’ve been impressed with the results.”

Using all the tools at their disposal, the Smithsonian researchers have been able to determine that planes strike lots of wildlife — bats, snakes, turtles, frogs, even fish — not just birds.

“The fish strike was puzzling,” Dove says with a chuckle, “because it was reported at an altitude of 1,500 feet.” A closer look at the microstructure of the sample, however, revealed that it contained bits of feathers, and from a major fish-eater — an Osprey. Case solved.

Another time, the Feather Lab received only cheesecloth smeared with blood. When the lab’s genetics specialist extracted a DNA sample and tested it, she got a strong match to deer.

“Normally, we would have accepted the ID, but the plane was flying at 1,500 feet,” Dove says. “So unless reindeer really do fly, this was impossible.”

When the researchers went back to the sample, they found several downy feathers from a Black Vulture — one that must have been scavenging a deer carcass.

Identifications made by the researchers are feeding a database that air crews at Bagram, the main U.S. air base in Afghanistan, can consult to determine the hours and seasons when bird conditions are riskiest to pilots. “We use this data to analyze what we’re hitting, where we’re hitting, and when we’re hitting, so we can avoid them,” says a flight safety officer at the base.

And the benefits flow in both directions: Before Air Force personnel at Balad Air Base, Iraq, started sending carcasses to the Feather Lab, only eight inventoried specimens in the Smithsonian’s collection were from Iraq, and they represented just four species.

Dove says the new specimens will benefit not only her identification program but also the work of anyone interested in the birds of the region. “When specimens are catalogued into our collections, they are available for researchers all over the world to come to study, or to borrow for examination.”

Of course, working with the military occasionally means observing limits, as the feather-identification team learned in the early 1990s, when a package arrived from Mountain Home Air Force Base, the home of the 366th Fighter Wing. Since Mountain Home is in Idaho, the researchers assumed the sample would contain the remains of a North American bird species. But when they opened the package, they were surprised to find a full wing covered with vibrant blue and turquoise feathers.

Dove and her colleagues pulled out the field guides and started working on the identification without regard to the reported location of the strike. In time, they determined the species was a European Roller (Coracias garrulus), a handsome, colorful bird that breeds in southern Europe, North Africa, the Middle East, and Asia and winters in southern Africa.

Dove called the flight safety office at the air base and asked if it was possible that the plane had been flying somewhere in Africa or the Middle East. “Ma’am,” replied the master sergeant on the other end of the line, “you do not need to know where this plane was flying.”

Jennifer A. Lynch is a wildlife biologist living in Hadley, Massachusetts. She spent the majority of her 13-year federal career managing wildlife hazards at airports. Originally Published February 20, 2009