A bird known only from a specimen collected between 1843 and 1848 has been rediscovered on the Indonesian part of the island of Borneo.

In October 2020, Muhammad Suranto and Muhammad Rizky Fauzan found the elusive Black-browed Babbler during a weekly trip to gather forest products in South Kalimantan province. After accidentally capturing a bird, which neither recognized, they took photos and notes and then released it unharmed back to the forest. They sent the photos to the local birdwatching group BW Galeatus in hopes that they would be able to identify it.

The group suspected it might be the Black-browed Babbler and immediately contacted ornithologists Panji Gusti Akbar, Teguh Willy Nugroho, and Ding Li Yong, who compared the photos taken in South Kalimantan to a current field guide description and photos of the only known specimen of the species, at the Naturalis Biodiversity Center in the Netherlands.

“It was a bit like a ‘eureka!’ moment,” said Gusti Akbar, of the Indonesian bird conservation group Birdpacker. “This bird is often called ‘the biggest enigma in Indonesian ornithology.’ It’s mind-blowing to think that it’s not extinct and it’s still living in these lowland forests, but it’s also a little scary because we don’t know if the birds are safe or how much longer they may survive.”

The ornithologists and the men who found the bird published a brief paper about the discovery today, February 25, in BirdingASIA, the journal of the Oriental Bird Club. They say they’ll publish more details in the coming months.

The new photos of a live Black-browed Babbler immediately yielded new information about the species. Scientists now have a better understanding of the species’ true coloration. The babbler’s iris, bill, and legs were slightly different colors than that of the original specimen, but the difference was not surprising to scientists, since those areas often lose their tint and are artificially colored during the taxidermy process.

The rediscovery is helping scientists and conservationists answer questions that have been swirling for more than a century. Scientists had never been sure where the bird lived in the wild. The original and only specimen collected by German geologist and naturalist Carl A.L.M. Schwaner between 1843 and 1848, and described by Charles Lucien Bonaparte in 1850, was initially mislabeled and described as being from Java. In 1895, naturalist Johann Büttikofer found that the specimen could not have been from Java because Schwaner had not collected any birds on the island. After reviewing and scrutinizing records of Schwaner’s travel in Indonesia, scientists speculated that he may have found the bird near the city of Martapura or Banjarmasin in Borneo.

Rediscovered in midst of the pandemic

“I think it is amazing that we managed to document one of the most remarkable zoological discoveries in Indonesia, largely through online communication, in the midst of the pandemic, which has hampered us from visiting the site,” said Teguh Willy Nugroho, who works in Sebangau National Park in Kalimantan and is one of the coauthors on the paper.

Due to COVID-19 safety precautions, scientists have not been able to travel to the area where the Black-browed Babbler was found, but they are working on a second paper to document its ecology and are hoping to work with local government agencies to plan expeditions later this year.

“When the species was first discovered, now-extinct birds like the Great Auk and Passenger Pigeon were still alive,” said Yong, a co-author on the paper and a Singapore-based conservationist with BirdLife International. “There is now a critical window of opportunity for conservationists to secure these forests to protect the babbler and other species.”

Scientists know very little about the Black-browed Babbler, but the Indonesian authors of the paper are hoping to work with local government agencies to quickly change that. They plan to travel to Borneo to identify exactly where the species lives, interview locals, study the babbler’s behavior, and assess the population — information that could be used to recommend a new status on the International Union for Conservation of Nature’s Red List of Threatened Species. The bird is currently listed as Data Deficient and scientists are hoping to determine if and to what extent the species is threatened with extinction.

“Globally, there are more than 150 bird species that are currently ‘lost,’ with no confirmed observations in the past 10 years,” said John C. Mittermeier, director of threatened species outreach at American Bird Conservancy (ABC). “ABC, Global Wildlife Conservation, BirdLife International, and eBird are working together to help find these species. Hopefully, the rediscovery of the Black-browed Babbler will spark interest in finding other lost bird species in Asia and around the world.”

“Discoveries like this are incredible and give us so much hope that it’s possible to find other species that have been lost to science for decades or longer,” said Barney Long, Global Wildlife Conservation’s (GWC) senior director of species conservation and a lead on GWC’s Search for Lost Species program. “Collaborations between conservationists, local communities, and Indigenous peoples are crucial to learning about and saving these elusive species.”

More than 1,600 species of birds live across the Indonesian archipelago. Scientists are hoping that the discovery may rekindle interest in surveying birds in under-researched areas. GWC, ABC, BirdLife International, and eBird are working to mount searches for lost birds around the world.

Thanks to American Bird Conservancy for this report.

Lost Colombian brushfinch found in the wild for the first time 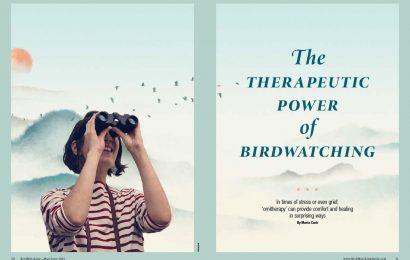 In times of stress or even grief, ornitherapy can provide comfort and healing in surprising ways by focusing on the wonders of nature.