Become a member and get exclusive access to articles, contests and more!
Start Your Free Trial
BirdWatching  •  News & Features  •  Science  •  In search of nightjars 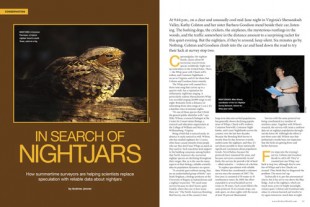 At 9:44 p.m., on a clear and unusually cool mid-June night in Virginia’s Shenandoah Valley, Kathy Colston and her sister Barbara Goodson stand beside their car, listening. The barking dogs, the crickets, the airplanes, the mysterious rustlings in the woods, and the traffic somewhere in the distance amount to a surprising racket for this quiet evening. But the nightjars, if they’re around, keep silent. Six minutes go by. Nothing. Colston and Goodson climb into the car and head down the road to try their luck at survey stop two.

Caprimulgidae, the nightjar family, claims about 80 nocturnal, insectivorous species worldwide. Eight turn up somewhere in the United States. Three — the Whip-poor-will, Chuck-will’s-widow, and Common Nighthawk — occur in Virginia, and it’s for them that Colston and Goodson listen intently.

The Whip-poor-will, named for a three-note song that carries up to a quarter mile, has a reputation for enthusiastic nighttime singing. A particularly zealous Massachusetts Whip was recorded singing 28,898 songs in one night. Romantic from a distance (or infuriating from close range at 3 a.m.), it’s a familiar voice of summer nights.

“It’s one of those species that I think the general public identifies with,” says Mike Wilson, a research biologist at the Center for Conservation Biology, a research and education organization at the College of William and Mary in Williamsburg, Virginia.

Being a bird that is noticed easily, its absence is easily noticed as well. Wilson, who has studied nightjars for 12 years, often hears casual remarks from people who say they don’t hear Whips as much as they used to. Such anecdotes lend support to the building consensus among birders that North America’s shy, nocturnal nightjar species are declining throughout their ranges. But, as is the case for many aspects of their biology, reliable scientific data on population dynamics are sparse.

“It certainly goes without saying, they are an understudied group of birds,” says Mark Brigham, a biology professor at the University of Regina in Saskatchewan and a nightjar researcher. “We need some surveys because we don’t know, quite frankly, where they are or how many there are.” The North American Breeding Bird Survey, one of the country’s best long-term data sets on bird populations, has generally shown declining populations of Whips, Chuck-will’s-widows, Common Poorwills, Common Nighthawks, and Lesser Nighthawks across the country over the last four decades. Because the Breeding Bird Survey is mostly done by day, however, it surely undercounts the nightjars, and thus, it’s not always possible to draw statistically significant conclusions about population trends. Nevertheless, because the protocols have remained the same, and because surveyors consistently record birds, the surveys do provide a bit of hard — albeit tentative — evidence of a decline.

To replace speculation with reliable data, Wilson has coordinated a volunteer survey since the summer of 2007. The first year, it consisted of 59 routes in 10 southeastern states. By 2009, the effort expanded to several hundred survey routes in 38 states. Each count follows the same protocol: 10 six-minute stops, one mile apart, on clear nights with the moon at least 50 percent illuminated.

Surveys with the same protocol are being coordinated in a number of northern states. Together with Wilson’s research, the surveys will create a uniform data set on nightjar populations throughout the lower 48. Although the effort is just three years old, Wilson says that preliminary results bear out suspicions that the birds are getting fewer and farther between.

Five stops into the evening’s survey, Colston and Goodson decide to call it off. They’ve counted just one Whip, way back at stop two, although they’re sure lots of Whips and a few Chucks are around. They think they’ve diagnosed the problem: The moon isn’t up.

Technically it is, per the astronomical charts, but it has yet to rise above the Blue Ridge. And so the nightjars, which are much more active in bright moonlight, remain quiet. Colston and Goodman take solace in a lesson learned and resolve to try again tomorrow, much later at night.

Survey difficulties like theirs present a constant challenge for Wilson, who tries to maintain as rigorous a protocol as possible without asking too much of his volunteers. During the two two-week survey windows in 2008 and 2009, the weather often wasn’t cooperative, and full moon or not, Chucks and Whips don’t sing as much if they can’t see it.

Now you can count

If you can identify nightjars by their calls and can spare a few hours this spring or summer, scientists could use your help surveying the birds. Routes are available in most of the lower 48 states. Surveyors make 10 six-minute stops, one mile apart, to listen for birds on clear nights with the moon at least 50 percent illuminated. Counts may be completed April 21-May 6, May 20-June 4, or June 19-July 4, depending on your location.

Habitat destruction is thought to be one of the chief causes of shrinking populations. The birds generally thrive in fragmented habitat with wooded cover for nesting (more accurately: egg-laying, which they do on the ground, sans nest) and open areas for foraging. Too much disturbance, however, drives them away by disrupting nesting sites. Development can also increase numbers of ground predators — cats, raccoons — that put further pressure on populations. Survey results so far have also fit the hypothesis.

Exhibit one is Loudoun County, Virginia, which has distinguished itself in recent years as the country’s fastest-growing. “I think they’ve pretty much disappeared from the county,” says Joe Coleman, a Northern Virginia birder who has volunteered for the survey. In 2008, he recorded just two Common Nighthawks on his route, in an area of the county that’s undergone recent large-lot development. Last year, he counted nothing at all. Coleman then tried a second route, in an area of western Loudoun that he thought would still make for good habitat. He found a disappointing two nighthawks.

“Depressing, I guess, is the best way to put it,” he says.

Coleman isn’t alone in his dismay. “The most surprising thing to me is that there are routes with zero birds that I would have expected to have large populations,” says Wilson. For example, a route that he expected to be productive along the Colonial Parkway between Williamsburg and Yorktown, Virginia, came up empty-handed.

“I think that is an indication that the decline is pretty substantial,” he says. Routes in quieter parts of Virginia have turned up higher numbers. A surveyor in Highland County, in the mountainous western part of the state, counted 16 Whips. In Gloucester County, along the Chesapeake Bay, another volunteer heard 16 Chucks and one Whip — suggesting that nightjars still thrive where the bulldozers don’t.

That was also the case elsewhere across the country.

“Carolina Sandhills [National Wildlife Refuge] was absolutely fantastic,” says Doug DeNeve, a survey volunteer from Hartsville, South Carolina, who heard plenty of Chucks and Whips. The refuge protects more than 45,000 acres of relatively undisturbed land with plenty of pine forest. “In areas where the habitat is not degraded, they’re all over the place,” says DeNeve, who saw a Chuck sitting on a bridge rail just before he and his wife began their survey route.

In the Dragoon Mountains in southern Arizona, volunteer Janine McCabe heard Common Poorwills at almost every survey stop, which, she says, came as no surprise. Researcher Mark Brigham says that because arid scrubland, the poorwill’s preferred habitat, remains abundant in the west, the species is under less pressure than other nightjars.

“We [had] a number of routes that had tremendous numbers of Whip-poor-wills,” says Andy Paulios, the Wisconsin Bird Conservation Initiative coordinator who oversaw the survey routes in that state. While few nightjars turned up in heavily developed parts of Wisconsin, areas with suitable habitat — interrupted forest on sandy soils — appear to have healthy populations.

And yet, overall, Wilson says, it seems that American nightjars are on the decline, across all species and all regions. Despite the many productive routes surveyed in good habitat, he has received numerous reports of unexpectedly (and dishearteningly) low numbers of birds in habitat that appears to be equally suitable. The Whip-poor-will, most particularly in the northern portion of its range, strikes him as a species that’s undergone a substantial decline, he says.

In addition to habitat loss, indiscriminate pesticide use in the name of gypsy-moth control has also been suggested as a reason for shrinking the birds’ populations by collaterally killing the native moths that make up the bulk of nightjar diets. Little evidence exists for or against the idea, Wilson says, although it remains an important topic for further investigation.

Brigham suggests yet another possibility: that an edge species like the Whip-poor-will became abundant in certain areas thanks only to a century or two of intense logging and forest clearing that created ideal yet artificial habitat. As the forests, particularly in the east, regrow and mature, he says, perhaps the “decline” of the Whip-poor-will should be interpreted as simply a return to normalcy.

“I really think that’s worthy of study,” he says.

Wilson agrees that Brigham’s idea makes sense, as a number of early successional species — Grasshopper Sparrow, Eastern Towhee, Loggerhead Shrike, and others — have all declined in areas where forests have been allowed to regrow. The fact that seemingly positive conservation efforts — Save the Forests! — aren’t necessarily beneficial across the board — Where have all the Whips gone? — begs a tangential but sticky question: Should the disappearance of species from a marginal, artificially expanded part of its range, such as the Whip-poor-will in Canada, be something to worry about?

“It’s a hard thing to struggle with,” Wilson says. “I wouldn’t say that I even have all my thoughts together on that.”

Whatever the cause of the decline, Wilson doubts that his data will halt habitat destruction across the ranges of all nightjars. He hopes, however, that the finding may encourage policy makers to strengthen conservation efforts in and around good remaining habitats, such as Virginia’s Great Dismal Swamp. He plans to continue coordinating the survey and to monitor land-use changes along the routes to better understand the relationship between developing land and disappearing nightjars.

On the drive back to the cabin, Colston and Goodson debate whether they should stay up late or get up early for the next night’s survey attempt. (In the end, they stayed up, set off at 12:30 a.m., completed the route, and heard six Whips.) Either way, it’s getting late now, and conversation dies down as they arrive home. They pause for a moment on the porch, to listen just one more time. And, from a distance, comes a parting goodnight tease: A Whip-poor-will is singing.

Andrew Jenner is a freelance journalist who often writes about the environment. He lives in Harrisonburg, Virginia.