Become a member and get exclusive access to articles, contests and more!
Start Your Free Trial
BirdWatching  •  News & Features  •  Science  •  How the ability to perceive ultraviolet light permits birds to see what human eyes cannot 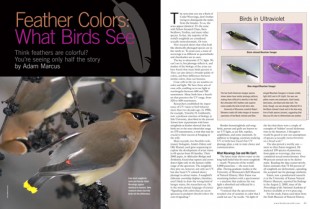 The next time you see a flock of Cedar Waxwings, don’t bother trying to distinguish the males from the females. To us, the sexes appear identical. It’s the same with Yellow-breasted Chats, Barn Swallows, Verdins, and many other species. In fact, the majority of the world’s songbirds are considered sexually monochromatic. Or were.

New research shows that what look like identically plumaged species are in fact rarely so. To avian eyes, a team of waxwings is as different as quarterbacks and cheerleaders are to ours.

The key is ultraviolet (UV) light. We can’t see it, but plumage reflects it, and studies of the biology of the avian eye have found that many birds perceive it. They can also detect a broader palate of colors, and finer differences between similar colors, than can humans.

Cone cells in the eye are sensitive to color and light. We have three sets of cone cells, enabling us to see light at wavelengths between 400 and 700 nanometers. Many birds have a fourth set that perceives the UV range, from 320 to 400 nanometers.

Researchers established the importance of UV vision in bird behavior more than two decades ago. In 1980, for example, Timothy H. Goldsmith, now a professor emeritus of biology at Yale University, described in the journal Science how experiments with hummingbirds at feeders showed that the birds see in the near-ultraviolet range (to 370 nanometers), a trait that may be crucial to their success at foraging in the wild.

More recently, two Swedish evolutionary biologists, Anders Odeen and Olle Hastad, used gene sequencing to explore the development of avian vision in 45 species from 35 families. Their 2003 paper, in Molecular Biology and Evolution, found that raptors and crows detect light only in the human-visible range of the spectrum. The songbirds they prey on, however, not only see UV but also boast UV-colored showy plumage to attract mates. A songbird’s elaborate courtship displays, therefore, aren’t likely to draw the wrong kind of hungry stares, the researchers say. Or, in the more prosaic language of science: “Signaling with colors that are inconspicuous to predators should reduce the cost of signaling.”

Besides hummingbirds and songbirds, parrots and gulls are known to see UV light, as are fish, reptiles, amphibians, and some mammals. In addition to foraging, scientists studying UV in birds have found that UV plumage plays a role in mate choice and communication.

What waxwings see and we can’t

The latest study throws water on the long-held belief that for most songbirds – nearly 70 percent of the world’s 5,000 passerines – the sexes look alike. During graduate studies at the University of Minnesota’s Bell Museum of Natural History, Muir Eaton was examining feathers with a spectrometer – a machine that analyzes the way light is absorbed and reflected by a given material.

“I noticed that the spectrometer revealed a lot of variation in color that I could not see,” he recalls. “In light of the fact that there were a couple of examples of ‘hidden’ sexual dichromatism in the literature, I thought it would be good to test our assumptions of species as sexually monochromatic on a broad scale.”

The idea proved a worthy one – more so than Eaton imagined. He analyzed 139 species of passerines, from pipits to waxwings, that were considered sexual monochromes. Over 90 percent turned out to be dichromatic. Reading the data conservatively, Eaton estimates that 73-82 percent of all songbirds are dichromatic, upending the accepted rate for plumage similarity.

Eaton, now a postdoctoral researcher at the University of Kansas Natural History Museum, reported his findings in the August 2, 2005, issue of the Proceedings of the National Academy of Sciences.

Richard O. Prum, head curator of vertebrate zoology at Yale’s Peabody Museum of Natural History, says Eaton’s findings, while intriguing, have yet to be firmly linked to bird behavior. Eaton is eager to fill the gap with additional evidence.

“Now, when you look at these birds, you can think to yourself, maybe they’re behaving in a certain way because they know who the males and females are in a flock,” Eaton says. “That’s the sort of thing that’s missing.” He speculates in his paper that plumage signals we can’t see “might be a pervasive feature of avian coloration.”

Differences may be subtle

Indirect evidence suggests that the differences Eaton saw on his spectroscope do influence behavior. A 2004 paper in the journal Animal Behavior showed that Yellow-breasted Chats, long considered sexual monochromes, could recognize the sex of stuffed specimens placed in their territories without any other identifying clues, such as songs or displays.

Herman Mays, a postdoctoral researcher at Auburn University, helped conduct the study. The differences between the sexes are subtle, he says. “But there probably is still some sex selection operating to make males brighter than females.”

Eaton studied chat specimens and looked at the way they scattered UV light. “The breast coloration of the sexes was pretty different if you analyzed the spectral readings,” he notes. In calculating what he calls “avian color space,” the full range of colors that birds see, Eaton found significant differences between chats’ face, head, and chest plumage.

More evidence for UV-related mate-selection behavior comes from a 2004 paper on two nearly identical species: the Black-chinned and Blue-winged Mountain-Tanagers, found in the northern Andes Mountains of South America. The birds are considered “sibling” species and are difficult to differentiate in the field.

Both have black faces, yellow crowns and underparts, blue wing edges, and black and blue tails. The key field mark is back color. Black-chinned’s is olive, and Blue-winged’s is black. Some Blue-winged subspecies, however, also have olive-colored backs, yet the two species do not interbreed. Somehow, the birds know how to tell each other apart.

What tells the birds who’s who, according to zoologist Robert Bleiweiss of the University of Wisconsin Madison, are patches of UV-reflecting plumage on the Black-chinned’s back. The mountain-tanagers appear to rely at least in part on the UV reflections to select mates. He published his study in the Proceedings of the National Academy of Sciences.

“Ignorance of humans to UV-based plumage differences,” he wrote, “highlights that sibling species really are no different from other biological species except that their distinctions are more obvious to the organisms involved than to humans.”

Eaton believes his findings throw into question a prevailing assumption about the evolution of sexual plumage patterns in birds. “If my results are correct and most species are sexually dichromatic, that suggests that maybe it’s the ancestral characteristic for most groups of birds, and that maybe the monochromes are evolving from dichromes,” he says.

Prum marvels at the recent advances in the understanding of avian visual acuity. The new knowledge does not reflect favorably on human eyesight. Consider the difference between us and birds: While you see a beach full of sunbathers, the Herring Gull overhead can tell who’s slathered in UV-blocking sunscreen. “Those kinds of details,” Prum says, “can really make you realize that birds in some neurological ways have superior abilities to sense the world than we do.”