If you have seen birds eating periodical cicadas, researchers want to hear about it. The birds that eat cicadas are surprisingly poorly documented, and you can help fill this gap by reporting your sighting at https://bit.ly/BirdsEatingCicadas.

Since early May, nearly 300 observations of almost 50 bird species from six states have been submitted to our survey. This is more than twice the number of cicada-eating species that have been documented in the scientific literature. Some of the newly logged species include Lincoln’s Sparrow, Mallard, Olive-sided Flycatcher, Carolina Chickadee, and Northern Waterthrush — an outstanding start to the beginning of the current emergence.

After spending many years underground, the entire population of periodical cicadas emerges en masse to sing, reproduce, and die. The eastern and central United States is home to 12 broods of periodical cicadas that emerge every 17 years and three that emerge every 13 years. Brood X, a 17-year cicada, is emerging this year. The event will last for a couple more weeks.

Some regions have larger cicada populations than others.  Brood X is the largest of all the populations; it numbers in the hundreds of billions.

As the map below shows, Brood X can be found in parts of 15 states, from Illinois, Indiana, and Michigan to Delaware, Maryland, and North Carolina, as well as in Washington, D.C. 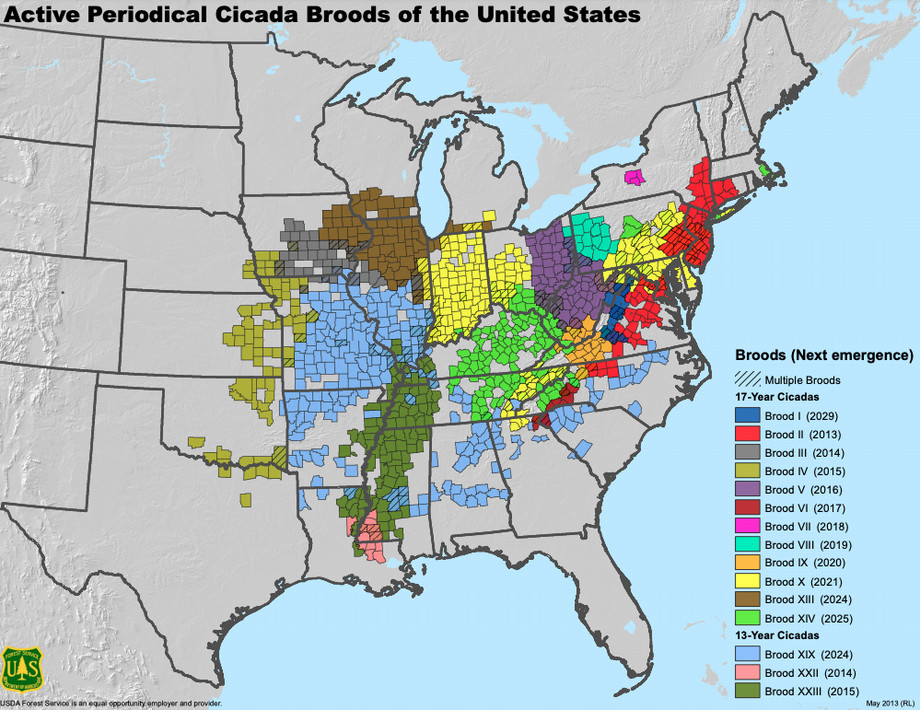 Cicadas are large insects — almost as long and thick as your pinkie finger. They are also conspicuous, slow-moving, and completely lacking any predator defense other than overwhelming abundance. From a bird’s perspective, cicadas are as close to a buffet table as evolution has produced.

Periodical cicadas emerge in late May or early June, just as birds are wrapping up migration and beginning to nest. Migration and reproduction are two of the most energetically costly events of a bird’s life, so the cicada buffet must be a spectacular surprise that is immediately put toward the next avian generation.

Despite widespread interest in cicadas’ unusual life history, only a handful of bird species have been documented eating them. It’s widely acknowledged that birds represent the most important group of predators to cicadas, and a couple of studies have looked at how they interact ecologically, but we don’t know much about what species do — and what species don’t — eat the crunchy critters.

You can help researchers study how the cicada emergence changes local food webs — perhaps even allowing other insects to thrive and eat more leaves on local trees. Birds are the key to understanding how cicadas affect other parts of the forest. You can join in on this scientific discovery by sharing any observations of birds eating cicadas using our five-question survey, or you can actively gather quantitative data using the protocols found on https://friendtocicadas.org/brood-x-bird-feastprotocol. If you have questions, you can email [email protected].