Become a member and get exclusive access to articles, contests and more!
Start Your Free Trial
BirdWatching  •  News & Features  •  Science  •  Extravagance explained: Why birds-of-paradise are the way they are

I saw one of the most handsome birds in the world not too long ago.

It was a male about the size of a jay, generally rust-colored with a yellow head and emerald chin and throat. Most striking were its white and yellow flank feathers, which were twice as long as the bird’s body and trailed far behind it. They were fluffy and lace-like.

When a female landed nearby, the male transformed himself into a hyperactive billboard. He spread his flank feathers above his back, shimmering, and jumped wildly around the female for 10 minutes. It was spectacular.

In time, he landed on the same branch as his intended. Shaking his side feathers over his back and flapping his wings slowly below, he moved close to her. Then, when her bill touched his chest, he preened her hindneck. She crouched and fluttered her wings, signaling that his courtship displays had won her over, and they mated.

The scene took place in New Guinea, and, no, I didn’t witness it. I learned about the bird, a Greater Bird-of-Paradise (above), while watching a National Geographic television program about the work of field biologist and photographer Tim Laman and Cornell University ornithologist Ed Scholes, who recorded all 39 species during 18 expeditions over eight years.

Found only in New Guinea and on surrounding islands as well as in a corner of Australia, birds-of-paradise are an extraordinary group of birds. Most wear vivid colors and have lacey feathers or feathers modified into flags, disks, wires, or ribbons. To these traits add tantalizing displays and dances — some even transform their bodies from a typical bird-like silhouette to one that is very non-bird-like — and you have the most spectacular and complex courtship of all avian groups.

The male Wilson’s Bird-of-Paradise, for example, has a teal crown (actually bare skin), bright yellow hindneck, and crimson back and inner wing feathers, as well as an emerald chest and purple feet and tail feathers. The Splendid Astrapia, on the other hand, is a champion of iridescence: Incredible blue-green hues on its head and body contrast with orange and red colors on the neck and throat. 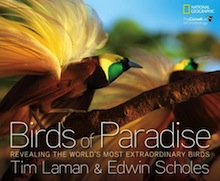 Tim Laman and Edwin Scholes’s photos have been gathered into a beautiful coffee-table book:

You can see more photos by Tim Laman at timlaman.com.

Two unusual feathers emerge from behind the eyes of the male King of Saxony Bird-of-Paradise. They have to be the most unfeather-like feathers in the bird world: Imagine a wire twice as long as the body adorned with a series of small, square plastic flags.

Wires ending with paddles extend from the head of the five species of Parotias, too. The birds clear a section of the forest floor before they dance. Then they spread their upper breast feathers so they resemble a tutu and perform a display called the ballerina dance. Laman and Scholes noticed that, during it, the female sat on a horizontal branch hung low over the ground. That is, she looked down on the male. To see his display from the female’s perspective, Laman rigged a remote-controlled camera in the canopy. The video was stunning: a spinning black disc punctuated with bright flashes of iridescences as the male moved his head.

Europeans first learned of the birds-of-paradise in 1522, when Magellan’s only surviving ship returned home after its around-the-world voyage. In it were gifts for the King of Spain, including specimens of the Greater Bird-of-Paradise.

Naturalists Alfred Russel Wallace and Charles Darwin visited New Guinea in the 1850s. Both were awestruck by the beauty of the birds and how different they were from one another. It was the wild colors and the enlarged feather plumes that piqued Darwin’s interest, since they seemed at odds with his developing theory of natural selection, which favors traits that confer survival value to the individual. How could all of this gaudiness offer survival value?

Darwin was thinking of the upper tail covert feathers of the Indian Peafowl, which are grossly overgrown and loaded with eyes. The peacock’s tail couldn’t be explained by natural selection, and neither could the plumages of the birds-of-paradise.

Darwin believed the colors, modified plumes, and dances were intended to help males gain favor with females and had nothing to do with survival. Years later, he explained that male “beauty” was a result of sexual selection, a concept that was ahead of its time.

Sexual selection is favored when food is abundant, predators are few, and males mate with several females, but no pair bonds are formed (a mating system known as polygyny). A male, therefore, can spend almost all of his time displaying, while the female can easily build a nest for her clutch of one, incubate the egg, and have no problem finding enough food for her and the youngster.

The zoogeographical requirements for sexual selection are not common, but New Guinea and its surrounding islands are perfect: They are filled with fruit trees, but no monkeys or other primates compete for fruit, no squirrels vie for seeds, and no avian or mammalian predators threaten the adult birds, especially the “billboard” males.

As long as females select the males for mating, and as long as the females prefer the “sexiest” plumages and displays, male birds-of-paradise will amaze us with vivid colors, incredible feather plumes, and tantalizing displays and dances.

Laman and Scholes describe 39 species of birds-of-paradise grouped in the following 15 genera.

Other Manucodes, Manucodia (4 species)
New Guinea and a few nearby islands

Eldon Greij’s column “Amazing Birds” appears in every issue of BirdWatching magazine. This article appeared in the August 2013 issue. Eldon is professor emeritus of biology at Hope College, located in Holland, Michigan, and the founding editor of Birder’s World magazine. Here are other columns by Eldon:

Why woodpeckers can hammer without getting headaches

The value of flocks