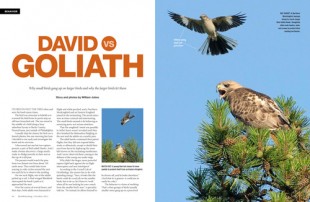 I’d driven past the tree often and seen the hawk many times.

The bird was awesome to behold as it scanned the field from its perch atop an old bare-branched oak. The tree stood in the middle of a field along a busy suburban byway in Bucks County, Pennsylvania, just outside of Philadelphia.

I usually skip the chance for bird-on-a-branch photos, but one morning last June I decided to rise early and investigate the hawk and its environs.

I discovered not one but two raptors present, a pair of Red-tailed Hawks. And I made a bonus discovery: a large nearly-ready-to-fledge juvenile in their nest at the top of a tall pine.

The parents would watch the pine from two distant tree lines about 150 yards away. They would take turns soaring in wide circles around the nest tree and fly by to observe the nestling.

On one such flight, one of the adults picked up a tail: A Red-winged Blackbird intercepted the hawk’s path as it approached the nest.

Over the course of several hours, and then days, both adults were harassed in flight and while perched, and a Northern Mockingbird and an Eastern Kingbird joined in the tormenting. The aerial antics were at times comical and entertaining. The small birds seemed to be behaving as annoying pests, not serious attackers.

That the songbirds’ intent was possibly to inflict harm wasn’t revealed until they dive-bombed the defenseless fledgling in the nest and the adults on a nearby pine.

The adult hawks continued their patrol flights, but they did not respond defensively or offensively, except to shield their eyes from harm by deploying the inner lids known as the nictitating membranes. And I never observed them coming to the defense of the young one under siege.

Why didn’t the larger, more powerful raptors fight back against the in-flight interceptors and nest interlopers?

According to the Cornell Lab of Ornithology, the answer has to do with spending energy. “Sure, it looks like the hawk could do a real job on the smaller birds, but to do so, he’d have to ‘work’ when all he was looking for was a snack from the smaller bird’s nest,” a specialist told me. “So instead, he allows himself to be driven off, and he looks elsewhere.” (And that he is generic: it could just as easily be a she.)

The behavior is a form of mobbing. That’s when groups of birds (usually smaller ones) gang up on a perceived threat, such as a hawk, owl, snake, fox, or squirrel. In addition to the species I watched, chickadees, jays, crows, warblers, and gnatcatchers will mob potential predators. And sometimes, avian experts say, a single bird will mob another. Crows are often observed as the targets of such aggression.

A review of research on the topic indicates the aggressive behavior is often related to territorial defense instincts, frequently when a nest is nearby.

Mobbers will give alarm calls, attracting more small birds to gang up on the potential predator, and they’ll chase and strike their targets, sometimes plucking a feather or two.

Birder’s World Founding Editor Eldon Greij noted in a December 2005 column that chickadees adjust their mobbing based on the degree of threat they perceive. A smaller, more maneuverable pygmy-owl, for example, elicits more complex alarm calls than a larger Great Horned Owl, which is less likely to attack a small chickadee.

Watching mobbers in action was fun — and not just because of the reaction, or lack thereof, from the hawks.

It also allowed me to catch glimpses of telling plumage details, such as the often-hidden orange or red stripe on the Eastern Kingbird’s crown and the Northern Mockingbird’s striking white wing and tail patches.

Birding is not simply an exercise in ticking species off a list. It’s more enjoyable, I think, to watch how birds behave. Seeing a songbird take on a hawk more than twice its size is about as thrilling as it gets.