Become a member and get exclusive access to articles, contests and more!
Start Your Free Trial
BirdWatching  •  News & Features  •  Science  •  Banding owls in Saskatchewan during the great irruption of 2004-05

Most winters, a keen birder can drive along the southern edge of the mixed forest anywhere in North America without seeing a single Great Gray Owl. But every four years or so, both the Great Gray and Northern Hawk Owl move up to a hundred miles south in increased numbers. The birds’ four-year cycle follows that of their almost-exclusive diet, voles. When vole numbers crash in the forest, the owls move. Birders flock north to get a sighting of both species, which are high even on most-wanted lists kept by Canadians.

The winter of 2000-01 was a good one for owl watchers, and the winter of 2004-05 was even better. Brenton Terry and I are raptor enthusiasts and licensed bird banders. Each year, we spend many hours in the field capturing owls. We weigh and measure them, assess their well-being, and place uniquely numbered aluminum bands on their tarsi, or lower legs. Then we release the birds unharmed.

About two percent of the owls we handle are subsequently found dead on highways or in mammal traps or are electrocuted. Comparing our banding records with where and when carcasses are found enables us to learn about the movements of each species and how long they live. This is my 63rd year of banding birds.

The 2004-05 owl irruption was evident from Alaska to Quebec. The Ottawa Citizen newspaper told of an unprecedented 100 Great Grays within 10 or 20 miles of Canada’s capital city. When ornithologist Mark Robbins, collections manager at the University of Kansas Natural History Museum, took his students north to Minnesota, they sighted 226 Great Grays in a single day. Another 500 or so Great Grays were found dead in Minnesota, the victims of starvation or automobile impacts.

In Saskatchewan, we were favored with a relatively mild winter and perfect weather for observing — and catching — Great Grays. Normally the owls will plunge through a foot or two of snow to seize a mouse heard nibbling or rustling below. But last winter the snow was deeper than average, the mice were harder to hear, and the owls were hungrier.

Most weekends, we drove in a four-wheel-drive vehicle 90 minutes north from Saskatoon, in south-central Saskatchewan, to reach the mixed forest. What excitement! Unprecedented numbers of northern owls! In their usual habitat a little farther north, the owls see few humans, hence they are remarkably tame. The owls we caught last winter, unlike those in Minnesota, were almost uniformly healthy. Their weights were good, and most were not carrying burdens of lice.

Whenever we saw a Great Gray (or a hawk owl) perched beside the highway, we stopped and placed a live mouse near our feet, at the edge of the road, sometimes on a small piece of warm Styrofoam. The mouse would move around on the plastic, peering at the snow over the edge. Then, usually within minutes, the owl would fly in, fearless, intent only on catching the mouse. Typically the owl landed within reach of our long-handled net. Displaying reflexes to rival those of Canadian hockey star Wayne Gretzky, Brenton and banding sub-permittee Michael Blom usually slipped the net gently over the owl before the owl harmed the mouse. 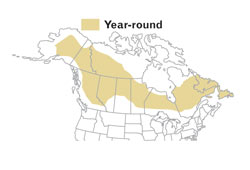 The Northern Hawk Owl hunts mostly by day, not at night as most other owls do. And it hunts boldly: While most owls rely on cryptic coloration to blend in with their surroundings, the hawk owl prefers exposed perches, often the top of a prominent tree. Its size, short wings, and long tail are also un-owl-like. They give the bird the shape and the fast, maneuverable flight of a Cooper’s Hawk, but the hawk owl can also hover like a kestrel and soar like a falcon. It is the only species in its genus (Surnia). It breeds only casually south of its breeding range in the boreal forest.

One mouse can perform as a lure, over several weekends, for 10 or more owls. We use mice purchased at a pet shop because they have no fear of owls. (Once when of necessity we used a wild deer mouse, it froze in fright. Since it did not move a whisker, the owl showed no interest.)

We captured our first four Northern Hawk Owls beside the highway east of the city of Prince Albert, north-northeast of Saskatoon, on October 30, 2004, soon after the first snowfall. Five more followed on November 6. In one six-hour period we captured 10 hawk owls. The species predominated on our weekend trips north until November 27, when we caught four Great Grays. Then we caught the two species in roughly equal numbers for the remainder of the winter.

The two biggest days for banding Great Grays were January 17, 2005, when we caught 9 owls, and February 13 (10). We saw more than twice as many owls as we caught. The highest number of Great Grays seen in a day was 25. By the winter’s final bandings on March 11, we had banded 87 Northern Hawk Owls and 74 Great Gray Owls. We even caught two Boreal Owls, a species seen much less often. We doubt that we will experience such success again in our lifetimes.

Exciting? You bet! Time-consuming and expensive? Positively. Two trips took us 440 kilometers (275 miles) northwest of Saskatoon to the Alberta boundary. Another two carried us 500 kilometers (312 miles) northeast to the Manitoba boundary. I made some calculations: Our gasoline cost $2,190 (Canadian), and we covered 22,351 kilometers (13,888 miles). This meant an average travel cost of $13.44 per northern owl banded and 16 liters (4.23 gallons) of fuel and an average distance of 137 kilometers (85 miles) between each owl. Or, within the main owl area, we saw two owls and caught one for every 80 kilometers (50 miles) of travel. A pretty expensive hobby. You don’t have to be crazy to be a bird bander — but it helps.

But the story does not end here. The pièce de résistance, as the French-Canadians say, occurred in early March. Gloria Stang, a schoolteacher in the city of Hudson Bay, only 50 kilometers (30 miles) from the Manitoba boundary, phoned to describe an owl that she saw regularly during her 10-mile drive to school from the family farm on the edge of the forest reserve. The bird had no tufts or horns and sat in the same copse of trees each day. The top and back of its head were immaculate white.

The local conservation officer had identified it as a Snowy Owl, but Gloria thought it was a partial albino Great Gray Owl. She asked me if this were possible. Yes, photographs have been published of pure albino Great Gray Owls, but none fit her description exactly. A few days later, on a trip to Saskatoon for other purposes, she came to meet Brenton and me and showed us her digital photographs. Clearly the owl was a partial albino. Scientists refer to its plumage as leucistic. (See the sidebar.) 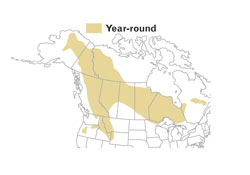 The outstretched wings of the Great Gray Owl measure four and a half feet from tip to tip on average, but its wingspan can be as much as five feet. Although the species breeds in North America from Alaska to western Quebec (including the upper two-thirds of Saskatchewan), in the Lower 48 it can be found only in the northern Rocky and Sierra mountains and in northeastern Minnesota. Its winter range is generally the same as its breeding range, but as demonstrated last winter, it will wander irregularly south in search of food, primarily small rodents.

The next weekend, Brent and his wife Judy Terry made the trip east and found the owl perched right where Gloria had predicted, in a tree standing three miles west of Hudson Bay. Both were astonished by the beauty of the docile creature. A mouse was set down, and the owl promptly responded.

It was captured and weighed, its wing chord (the distance from the carpal joint, or “shoulder,” to the tip of the longest primary) was measured, and an aluminum band was placed on its left tarsus. The long wing chord and a weight of 1.5 kilograms (3.3 pounds) indicated that it was female. We believe it is the most beautiful individual of a species that owl aficionados claim is the most attractive anywhere in the world.

The bird appeared to have a normally colored mate. (Its smaller size supported the conclusion that the banded bird was female.) Gloria and her husband Mo hoped they would be lucky enough to find its nest, but in spite of the winter influx, we were unable to find a single Great Gray nest in the spring of 2005. (We did find a record-setting five successful Northern Hawk Owl nests, however.) Had we found the nest of the leucistic female, we might have learned whether any of her young had additional white feathers, or whether some had a normal dark gray plumage.

The Great Gray Owl discovered by schoolteacher Gloria Stang in eastern Saskatchewan was leucistic, not albino. What’s the difference?

Albino birds have a complete lack of pigmentation in the eyes, skin, and bill as well as the feathers. The plumage is all white. Unfeathered areas are tinted pink.

Leucistic birds vary in appearance. They may be wholly white, or they may wear a mix of white and pigmented feathers. In contrast to albino birds, however, their eyes, skin, and bill are still normally colored.

C. Stuart Houston is a radiologist, but his life-long passions are for birds, bird banding, natural history, and conservation. Aided by his wife, Mary, he has banded more than 130,000 birds in 63 years, including 7,271 Great Horned Owls and 4,445 Swainson’s Hawks. He is also the author of hundreds of “non-medical” publications, most of them dealing with ornithology, and a co-author of the book Eighteenth-Century Naturalists of Hudson Bay (McGill-Queen’s University Press, 2003). He received the Marion Jenkinson Service Award from the American Ornithologists’ Union in 2004.