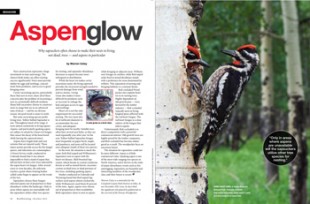 Nest construction represents a huge investment in time and energy. The choices birds make can affect nesting success significantly. Nests must provide shelter for eggs and nestlings, concealment from predators, and access to good foraging areas.

Cavity-excavating species, particularly those that nest in trees, share all of these concerns plus the problem of excavating a nest in a potentially difficult medium. Many hole excavators choose to construct nests in snags that are in an advanced state of decay — and for an obvious reason: decayed wood is easier to work.

But some excavating species prefer living trees. Yellow-bellied Sapsucker is one. Throughout much of its range, it nests almost exclusively in living aspens. Aspens, and particularly quaking aspen, are subject to attack by a heart-rot fungus that causes the decay of the heartwood while leaving the sapwood intact.

Aspens have fragile bark and root systems that are injured easily. These injury points provide access for the fungal spores, and infections are commonplace. A Forest Service study conducted in Colorado found that it was almost impossible to find a stand of aspen that did not have at least a few trees infected by the aspen heart-rot fungus. After several years or even decades, the infection reaches a point where fruiting bodies called conks begin to appear on the trunk of the tree.

Sapsuckers choose these fungus-infected aspens out of proportion to their abundance within the landscape. Only in areas where aspens are unavailable will the sapsuckers utilize other tree species for nesting, and sapsucker abundance decreases as aspens become more infrequent in distribution.

While the heart rot makes cavity excavation easier, the living sapwood provides the structural strength needed to prevent damage from wind and ice storms. Living tissue also makes it more difficult for predators such as raccoons to enlarge the hole and gain access to eggs and nestlings.

Heart rot is not the only requirement for successful nesting. The tree must also be of sufficient diameter to accommodate the nest cavity, and adequate foraging must be nearby. Suitable trees often have several nest holes, as they are used repeatedly year after year. In the east, Yellow-bellied Sapsucker forages most frequently on paper birch, maple, and juneberry, and nests will be located near adequate stands of these tree species.

In the west, the situation is much the same; both Red-naped and Williamson’s Sapsuckers nest in aspen with the heart-rot disease. (Red-breasted Sapsucker, which breeds in coastal coniferous forests as well as mixed forests, excavates cavities in dead trees or dead portions of live trees, including quaking aspen.)

Studies conducted in Colorado and Wyoming found that Red-naped Sapsuckers used aspens almost exclusively, while Williamson’s used them 85 percent of the time. Again, aspens were chosen out of proportion to their availability. Both sapsuckers chose to nest in aspens while foraging in adjacent areas. Williamson’s forages in conifers, while Red-naped seeks food in mixed deciduous stands with a preference for areas dominated by willows. This separation of nesting and foraging habitats is a constant theme.

Unfortunately, Red-cockaded is in direct competition with a powerful commercial interest. Old-growth trees are highly prized by the timber companies, and Red-cockaded has become endangered as a result. The woodpecker faces an uncertain future.

The situation for sapsuckers could not be more different. Aspen is of little commercial value. Quaking aspen is one of the most wide-ranging tree species in North America, and it thrives in the wake of major disturbance events such as fire and logging. Sapsuckers are beautiful and interesting members of the woodpecker clan, and their future is secure.

Warren Uxley is a naturalist for the Crawford County Park District in Ohio. In our December 2011 issue, he described the significant role played by goldenrods in the survival of the Downy Woodpecker.