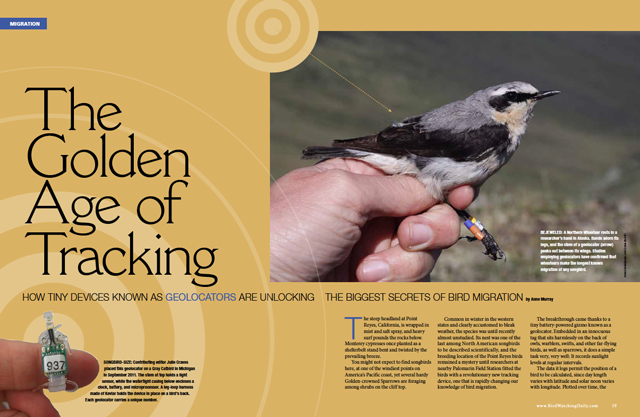 A top-notch article (The Golden Age of Tracking, pictured above) in our April 2013 issue explains how tiny new tracking devices known as geolocators are rapidly changing what we know about the migration of Northern Wheatears, Flammulated Owls, and other birds. Author Anne Murray spoke with researchers who have used geolocators to uncover migratory secrets and pinpoint wintering and breeding areas for species such as Golden-crowned Sparrow, Willet, and Swainson’s Thrush.

A sidebar in Murray’s article summarizes 10 recent discoveries about North American birds revealed by geolocators. Here I’ve added additional information about each finding, including links where you can read abstracts or whole papers, see photos, and learn more about the researchers.

Three birds have confirmed the astonishing migratory routes of Northern Wheatear. A bird from Baffin Island in northeastern Canada crossed the Atlantic to winter in western sub-Saharan Africa, and two wheatears tagged north of Fairbanks, Alaska, flew over the Bering Sea and through northern Russia and Kazakhstan before crossing the Arabian Desert to wintering areas in Sudan, Uganda, or Kenya. The Alaskan birds’ average round-trip distance — 18,640 miles (30,000 km) — is the longest known migration of any songbird.

Researchers Franz Bairlein and Heiko Schmaljohann of the Institute of Avian Research in Germany and colleagues described the study in August 2012 in the journal Biology Letters. (Schmaljohann took the above photo of a wheatear wearing a geolocator.)

In a September 2012 paper in Animal Behaviour, they explain the biological mechanisms at work when wheatears fly halfway around the world. The scientists have also used geolocators to track wheatears that nest in Europe; they described the birds’ routes to and from Africa in the journal Behavioral Ecology and Sociobiology.

Males and females that breed in Washington and Oregon spend winters far apart. In a study in which 25 geolocators were recovered from 93 tagged owls, researchers found that most females flew south to California for winter, while most males wintered in eastern Washington; males that nested in Oregon flew north in fall. The scientists say males choose to stay close to their breeding areas so they can get back to their territories quickly in spring.

David H. Johnson, director of the Global Owl Project, and Troy I. Wellicome, a Species At Risk biologist with the Canadian Wildlife Service, conducted the study and will describe it in a forthcoming research paper. We’re looking forward to learning more after they publish their results. (Their colleague Greg Green photographed the owl at right wearing a geolocator.)

A previously unknown migration route was uncovered when three tagged blackbirds were recaptured in 2010 at nesting areas near Anchorage, Alaska. The birds migrated through the central provinces and states and used stopover sites in Saskatchewan, the Dakotas, and Iowa. Fall migration lasted 72 to 84 days, while the spring trip was completed in 16 to 30 days.

James A. Johnson of the U.S. Fish and Wildlife Service and colleagues reported the results in the December 2012 issue of The Wilson Journal of Ornithology.

Tagged thrushes that were recaptured two years in a row at breeding sites in Pennsylvania did not follow the same migration route from their wintering areas in Costa Rica each year, possibly due to the effects of wind, stopover habitat, and each bird’s physical condition. The date they began migrating didn’t change much, however. Each bird departed within about three days of the date it left the year before, suggesting that a strong internal schedule drives the urge to fly north.

The research comes from the lab of Bridget Stutchbury, Canada Research Chair in Ecology and Conservation Biology at York University in Ontario and author of the 2007 book Silence of the Songbirds. In 2009, she became the first scientist to track songbirds with geolocators when she and several colleagues announced the results of groundbreaking research with Purple Martins and Wood Thrushes.

The new study appeared in the open-access journal PLOS One in July 2012 and was written by graduate students Calandra Stanley, Maggie MacPherson, and Emily McKinnon, postdoctoral fellow Kevin Fraser, and Stutchbury.

Birds tagged in parks near Washington, D.C., spent the winter in southern Florida or Cuba. Researchers reported that the finding supports data accumulated over decades of banding work: that catbirds breeding near the East Coast winter in Florida and the Caribbean, while catbirds breeding in the Midwest winter in Mexico and Central America.

Thomas Ryder and Peter Marra of the Smithsonian Migratory Bird Center and geolocator designer James Fox, formerly of the British Antarctic Survey, explained the results in the July 2011 issue of The Auk, the quarterly journal of the American Ornithologists’ Union.

A long-suspected wintering area in southern Mexico was confirmed in 2011, when four tagged owls were recovered near their breeding areas in central Colorado. The birds covered the 1,500-mile (2,500-km) distance in one to two weeks in fall; the return flight took a month or more. In northern Utah, HawkWatch International tagged 24 owls in 2012 (including the bird being released at right); when the birds return this spring, their geolocators should provide more information about wintering areas and migration routes. Stay tuned.

Brian Linkhart, associate professor of biology at Colorado College and the world’s foremost expert on the species, reported on the route to and from Mexico at the 2012 North American Ornithological Conference in Vancouver. Learn more on page 214 of the conference’s abstract book.

See photos of owls in the hand and read more about the project on the blog of Phoebe Parker-Shames, one of Linkhart’s students who assisted with the research.

Spring migration lasts about 12 days longer than fall migration, according to new data from geolocators worn by 13 Snow Buntings that nest on East Bay Island in northern Hudson Bay. The finding is highly unusual because most songbirds fly north in spring much faster than they fly south in fall. Scientists say the birds appear to make long stopovers, possibly in large groups that enable individual buntings the best chance to avoid predation by Peregrine Falcons.

Christie Macdonald, a graduate student at the University of Windsor, and several colleagues described the discovery in the open-access journal Animal Migration in November 2012. Macdonald tagged about 90 birds in two summers on the remote island.

Winter records of northern Black Swifts were nonexistent until researchers at the Rocky Mountain Bird Observatory tracked them with geolocators. They discovered that the birds fly 4,350 miles (7,000 km) south, from Colorado to lowland rainforests in western Brazil, at an average speed of 212 miles (341 km) per day.

Jason Beason, special monitoring projects coordinator for the Rocky Mountain Bird Observatory, and colleagues placed geolocators on four swifts in August 2009 and retrieved three the following spring. They reported on the migration path and wintering area in the March 2012 issue of The Wilson Journal of Ornithology.

In December 2012, a photo of an alleged Black Swift was taken at the Tambopata Reserve in southern Peru, not far from the area in Brazil that Beason identified as the wintering area of the tagged birds. If confirmed, it would be one of the only sight records of the species in South America.

The large shorebirds set groundspeed records of 60 mph as they flew 9,900 to 14,900 miles (16,000 to 24,000 km) on a previously unknown circular migration route around the Pacific Ocean. The birds flew from American Samoa in the South Pacific to a stopover in Japan before completing their trip to Alaska. The return flight from Alaska to American Samoa lasted just six and a half days.

A group of 14 researchers from four nations announced the findings in July 2012 in the Wader Study Group Bulletin. Lead author Oscar “Wally” Johnson, an ornithologist at Montana State University, has been studying the shorebird and its migratory habits for decades and co-authored the Pacific Golden-Plover account (No. 202) in the Birds of North America reference series.

Birds of the eastern subis subspecies were tagged in far-flung breeding sites in Pennsylvania, New Jersey, Minnesota, Virginia, South Dakota, Oklahoma, and Texas. When their geolocators were retrieved, the data revealed a surprise: The birds share a broad, overlapping wintering area along the Amazon River in northern Brazil. In contrast, martins from the western arboricola subspecies appear to have a distinct wintering region in southeastern Brazil, approximately 1,800 miles (3,000 km) from the core wintering region of the eastern subspecies.

Fraser and Stutchbury of York University and 12 colleagues published the research in December 2012 in the journal Proceedings of the Royal Society B. –Matt Mendenhall, Managing Editor

Last summer, we reported on a program formed by birding groups in Maryland and the District of Columbia that would provide scholarships for Black and … END_OF_DOCUMENT_TOKEN_TO_BE_REPLACED