Today, France committed to expanding marine protections by about 1 million square kilometers (386,102 square miles) in the southern Indian Ocean. French President Emmanuel Macron declared the new conservation measures at the One Ocean Summit in Brest, France. The move adds protections around Saint-Paul and Amsterdam Islands, the Kerguelen Islands, and the Crozet Islands — which are all part of the French Southern and Antarctic Lands, an overseas territory that is home to a richly diverse wildlife community. The expanded ocean protections make the waters around the three archipelagos the largest marine protected area in French waters by far, representing about 15% of the country’s global exclusive economic zone (EEZ).

Most importantly, the Southern Lands marine reserve will include a new highly protected area surrounding Saint-Paul and Amsterdam Islands and covering about 255,000 square kilometers (98,500 miles), where all extractive activities, such as industrial fishing, will be prohibited. The added area will more than double the percentage of French waters that are highly protected, from 1.6% to 4%, but still leaves the country with a challenge of reaching its goal of highly protecting at least 10% of its waters by the end of this year. Science shows that highly protected areas provide the most significant ecological benefits. 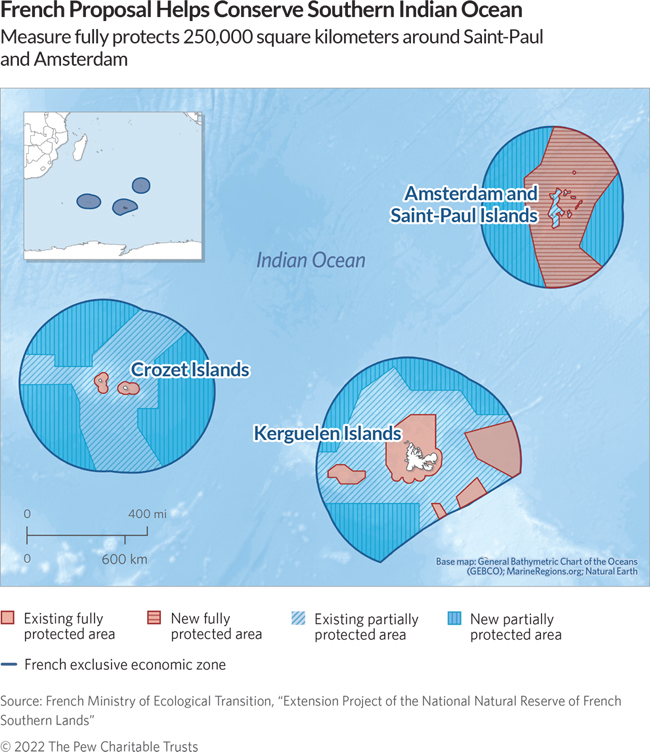 The waters of the Southern and Antarctic Lands host exceptional biodiversity, with resident and migratory marine life including critically endangered Amsterdam Albatrosses, orcas, whales, and several species of penguins, seals, and tuna. For example, the Crozet and Kerguelen Islands provide refuge to the world’s largest King Penguin colony and second-largest southern elephant seal colony, respectively. And Amsterdam Island is home to the roughly 30 remaining breeding pairs of Amsterdam Albatross, a critically endangered species found nowhere else on Earth. Researchers, military personnel, and support staff visit the islands occasionally, but the territory has no long-term human inhabitants.

Dona Bertarelli, co-chair of the Bertarelli Foundation and Patron for Nature for the International Union for Conservation of Nature, said: “France’s ambitious action to fully protect these waters is vital to ensure a healthy ocean ecosystem in a biodiverse area rich in marine life — including orcas, penguins, Antarctic fur seals, and the critically endangered Amsterdam Albatross. France’s announcement also provides a significant contribution toward the global goal of protecting at least 30% of our ocean by 2030.”

Thanks to the Pew Bertarelli Ocean Legacy Project for providing this news.

Chickadees, wrens, and other small songbirds work together to mob predator owls, but they only strike when the time is right.