Become a member and get exclusive access to articles, contests and more!
Start Your Free Trial
BirdWatching  •  News & Features  •  Conservation  •  My long walk 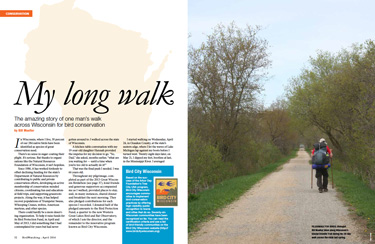 In Wisconsin, where I live, 30 percent of our 284 native birds have been identified as species of great conservation need.

There’s no sense in sugar-coating their plight. It’s serious. But thanks to organizations like the Natural Resources Foundation of Wisconsin, it isn’t hopeless.

Since 1986, it has worked tirelessly to offset declining funding for the state’s Department of Natural Resources by contributing to public and private conservation efforts, developing an active membership of conservation-minded citizens, coordinating fun and educational field trips, and supporting grassroots projects. Along the way, it has helped recover populations of Trumpeter Swans, Whooping Cranes, wolves, American martens, and other species.

This article was published in our April 2014 issue.

There could hardly be a more deserving organization. To help it raise funds for its Bird Protection Fund, in April and May of 2013, I did something that I had contemplated for years but had never gotten around to: I walked across the state of Wisconsin.

A kitchen-table conversation with my 19-year-old daughter Hannah provided the impetus for my decision to go. “So, Dad,” she asked, months earlier, “what are you waiting for — until a time when you’re too old to actually do it?”

That was the final push I needed. I was 66 years old.

Throughout my pilgrimage, completed as part of the 2013 Great Wisconsin Birdathon, kind friends and generous supporters accompanied me as I walked, provided places to stay, and, in many instances, shared dinner and breakfast the next morning. They also pledged contributions for each species I recorded. I donated half of the pledged amounts to the Bird Protection Fund, a quarter to the new Western Great Lakes Bird and Bat Observatory, of which I am the director, and the remainder to the innovative program known as Bird City Wisconsin.

A joint effort of the Natural Resources Foundation of Wisconsin and the Wisconsin Bird Conservation Initiative, the annual birdathon supports the foundation’s Bird Protection Fund, which in turn funds Bird City Wisconsin, the Wisconsin Stopover Initiative for Migratory Birds, Wisconsin’s Important Bird Areas program, Kirtland’s Warbler monitoring, the ongoing Whooping Crane reintroduction program, habitat protection in Costa Rica, and citizen science projects focused on birds. More information about each of these worthy programs, and details about this year’s birdathon, are on the birdathon website.

I started walking on Wednesday, April 24, in Ozaukee County, at the state’s eastern edge, where I let the waves of Lake Michigan lap against my boots before I turned west. Twenty-eight days later, on May 21, I dipped my feet, bootless at last, in the Mississippi River. I averaged approximately 10 miles a day, using handmade walking sticks and carrying a backpack weighing just less than 40 pounds, and covered 246 miles in all (only about a tenth of the length of a through-hike on the Appalachian Trail).

My route followed primarily an east-to-west track. After tallying 39 species at Forest Beach Migratory Preserve (Hotspot Near You No. 156), I traveled west to Fredonia and from there to the Cedarburg Bog, the largest relict bog in southeastern Wisconsin. Near Hartford, I connected to the famous Ice Age Trail, which winds for miles around the state’s beautiful glacial landforms. All along it, bloodroot, spring beauty, white trout lily, marsh marigold, hepatica, and other ephemeral spring wildflowers were in bloom.

Just south of Delafield, my path led to the Lapham Peak Unit of the Kettle Moraine State Forest and then met the 52-mile-long Glacial Drumlin Trail, which connects the city of Waukesha, west of Milwaukee, with Cottage Grove, just east of Madison, the capital. Like many state bicycling trails, it was built on an old railroad bed.

In Madison, I enjoyed lunch with the staff of the Natural Resources Foundation on the lawn of the state capitol. Then I hiked along the south shore of Lake Mendota to Picnic Point, the narrow half-mile-long peninsula famous to local birders because it is a reliable stopover for spring and fall migrants. While in Madison, I spotted the first Eastern Kingbird, American Coot, Warbling Vireo, Black-throated Blue Warbler, and Magnolia Warbler of my walk, bringing the growing species total to 120.

Continuing west, I entered Wisconsin’s Driftless Area, the unglaciated and rugged southwestern quarter of the state, and I followed country roads south of the Wisconsin River through Iowa and Grant counties. By 1:05 p.m. on May 21, when I finally got to rest on a boat landing on the Mississippi, in the city of Prairie du Chien, I had recorded 158 bird species (below). 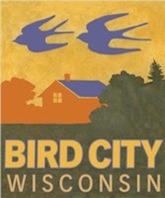 Based on the success of the Arbor Day Foundation’s Tree City USA program, Bird City Wisconsin encourages communities to implement bird-conservation practices by offering high-visibility public recognition to towns and cities that do so. Eighty-one Wisconsin communities have been recognized so far. You can read the certification criteria and see a list of bird-friendly communities on the Bird City Wisconsin website.

So many birders spend a lot of effort seeking out birds at concentration points or hotspots. That simply wasn’t possible for me most days; I couldn’t get in a car and drive to a location where good birds had been reported. Rather, I was moving slowly across the landscape, watching species appear gradually, day by day, as they, too, moved across the landscape.

One day in the first week of May, for mile after mile, Baltimore Orioles and House Wrens suddenly became abundant in habitats where they had been absent the day before. That’s not unusual for a single location — we experience that each spring, but not usually in quite the same way. I imagined the experience was similar to that of the biological surveyors of the late 19th century, who covered extensive distances on foot while cataloging the vegetation as well as animal and bird species.

Observations from the first day included Caspian Tern, Greater Scaup, and other species that I knew I would not be likely to see again as I went away from the Lake Michigan shoreline.

Meltwater-rainwater ponds that I passed during the first three days produced Bufflehead, Northern Shoveler, Wood Duck, both teal species, Mallard, and Lesser Yellowlegs. The weather was unusually cool and wet, and it was still too early for warblers other than an occasional Yellow-rumped Warbler.

Gradually warming temperatures over the next few days produced Great Crested Flycatcher, a growing number of Northern Flickers, here and there a Sharp-shinned Hawk, expanding numbers of Vesper and Field Sparrows, the first Purple Martins, and Brown Thrasher.

One day, I observed something that puzzled me: In roadside ditches adjacent to agricultural fields lacking vegetation other than old grasses, I watched hundreds of Ruby-crowned Kinglets and Yellow-rumps feeding on midges, tiny insects nearly invisible to the human eye. Since the nearest forested habitat was hundreds of meters away, I wondered how the birds had decided to alight there, or how they had found the insects in the first place — unless they were attracted by the presence of other individuals who were there already. But what led the first ones to find those midges?

More species were added to my list as the spring deepened, including multiple Eastern Towhees, the first Indigo Bunting, Blue-headed Vireo, and increasing numbers of White-throated Sparrows. At a crossing on the Oconomowoc River, a flock of dipping and swirling Northern Rough-winged Swallows entertained me — I had a difficult time tearing myself away from them.

The Midwest’s newest research, education, and conservation advocacy organization, the Western Great Lakes Bird and Bat Observatory was founded to advance knowledge of bird and bat populations and their conservation in Wisconsin and throughout the western Great Lakes region through coordinated research, monitoring, and education using good science. Bill Mueller is the director. The observatory is in Ozaukee County, Wisconsin, at the Forest Beach Migratory Preserve, Hotspot Near You No. 156.

In the first few days of May, new species showed up nearly hour by hour. Palm Warbler, Northern Waterthrush, Rose-breasted Grosbeak, Blue-gray Gnatcatcher, Yellow Warbler, Black-and-white Warbler, Swainson’s Thrush, Northern Parula — they all appeared during a single morning, along the banks of the Bark River, near Delafield.

The next weeks brought Solitary Sandpipers in flooded fields, Scarlet Tanagers, Veeries, and Canada Warblers in trailside woods, and numbers of Northern Waterthrushes at stream crossings. My trip list grew slowly on days that were rainy and cool, and more quickly on days with southerly winds and milder temperatures. Eastern Kingbirds, Warbling Vireos, finally a Black-throated Blue Warbler, and then Orchard Orioles arrived.

Especially noteworthy species discovered as I moved westward included Bell’s Vireo and White-eyed Vireo. Bell’s is threatened in Wisconsin, so it’s not found easily or encountered often; I came across it on three occasions. White-eyed is similarly uncommon; I recorded only one, in Grant County.

Once I reached the wet woodlands adjacent to the Wisconsin River, I found the occasional Prothonotary Warbler — and one magical morning, in a river-bottom swamp just east of Prairie du Chien, I found five. The area’s steeper, more densely wooded ravines and hillsides also offered up a few Kentucky Warblers, a Carolina Wren, and several Acadian Flycatchers, all uncommon in Wisconsin.

As much as I treasured the birds, though, it was the connections I made with people that provided the richest experiences. Some of the people who walked with me were new contacts; others were old friends. I could have predicted the beauty of the landscape and the birds, but I did not anticipate the serendipity of making human connections and friendships.

It seemed that a bigger narrative unfolded week by week. The long walk provided a frame through which conversations emerged. People talked to me about their feelings for the land, for birds and wildlife, and about how those feelings caused their belief in conservation and land protection to grow and deepen. I don’t think we would have had the same discussions in other, more ordinary circumstances. Since my own feelings and beliefs expanded as a result, I will always be grateful to everyone who shared his or her insights. Our interactions changed the outcome of my trip; it became something much deeper and more meaningful.

Many people also asked whether another Long Walk for Birds will take place this year. The answer is yes, but I’m working with the staff of the Natural Resources Foundation and the team planning the 2014 Great Wisconsin Birdathon to give the event a new twist. The route will again be long, but it will be directed from south to north, not from east to west, and it will be hiked by more than one person. Instead, participants (maybe even you!) will take turns doing sections. I’ll be walking, but a shorter distance. Come and join us!

Bill Mueller is an ornithologist and conservation biologist. He is the director of the Western Great Lakes Bird and Bat Observatory and the coordinator of the Milwaukee BIOME Project, which assesses avian species richness, timing of migration, and abundance, as well as habitat quality, in Milwaukee County. He writes regularly about birds and conservation in his blog The Future of Birds.

Last summer, we reported on a program formed by birding groups in Maryland and the District of Columbia that would provide scholarships for Black and … END_OF_DOCUMENT_TOKEN_TO_BE_REPLACED