Become a member and get exclusive access to articles, contests and more!
Start Your Free Trial
BirdWatching  •  News & Features  •  Conservation  •  In wake of Ivory-billed Woodpecker rediscovery, a plea for conservation of the world’s other declining species 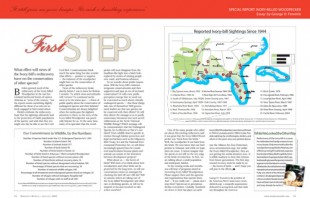 Birders greeted word of the rediscovery of the Ivory-billed Woodpecker in the vast bottomland hardwood forests of eastern Arkansas as “news of the century,” but the reports meant something slightly different for those of us who are actively engaged in bird conservation.

Birders celebrate the rediscovery, hope that the sightings ultimately lead to the protection of viable populations of the species, and wish that they too might one day be able to see the Lord God Bird. Conservationists think much the same thing but also wonder what effects — positive or negative — the existence of the woodpecker might have on the conservation of other species.

News of the rediscovery broke shortly before I was to leave for Bolivia. I wonder: To which views and attitudes will I return? To continued excitement or to the status quo — a form of public apathy about the conservation of endangered species and their habitats? Conservationists are always delighted when the media pays the slightest attention to them, so the story of the Ivory-billed Woodpecker was practically historic for us. At the same time, many of us speculate that the woodpecker will soon disappear from the headlines like light into a black hole, replaced by stories of missing people, new roads, and business advances.

So we wonder about public impressions. Will the Ivory-bill’s existence invigorate conservationists and their supporters and spur an era of increased conservation? Or will a new public perception emerge that we need not be concerned so much about critically endangered species — that these things take care of themselves? Will government leaders see that rare species can be conserved with their efforts? Or will they distort the message so as to justify unnecessary intrusions into such sacred wildernesses as the Arctic National Wildlife Refuge? Which message will be communicated: that the Endangered Species Act is effective or that it’s outdated? Does wildlife deserve specific attention through habitat protection and legal mechanisms such as the Migratory Bird Treaty Act and the National Environmental Protection Act, or will these increasingly ignored laws be considered anachronisms because plants and animals can sustain in the interstices between development projects?

What about us — the lovers of birds? Will more of us think about how woodpeckers and other birds can be protected for the long term, or will our conversations center on strategies for checking the bird off one’s life list? Will we assume others are taking care of the Ivory-billed Woodpecker and other rare or declining species, or will we be inspired to become involved or take action ourselves?

Still on the very edge

One of the many people who called me about this exciting rediscovery said it was great that the Ivory-billed Woodpecker was “back from the brink.” Well, the woodpecker is not back from the brink. We now know that one bird persists in Arkansas, and while we hope there are more, I cannot imagine that the species is not still on the very edge of the brink of extinction. At best, we are talking about a small population and inadequate habitat.

In the coming weeks and months, you will hear of programs aimed at recovering Ivory-billed Woodpeckers. Please support them and the agencies and organizations that operate them. And — if you really care — please don’t stop there! Species are in precipitous decline everywhere. Globally, hundreds are down to their last place on earth (see the Alliance for Zero Extinction), but unlike the Ivory-billed Woodpecker, they are not getting the media attention now. It is selfish madness to deny this richness from future generations. The first step toward recovery must be made by us — the lovers of birds — and I hope you will join in the efforts.

George H. Fenwick is the president of the American Bird Conservancy, a nonprofit organization dedicated to saving birds and their habitats throughout the Americas.