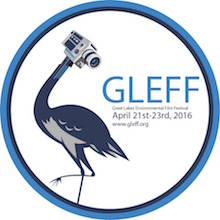 The festival is a free student-run event, hosted April 21-23, 2016, by the Diederich College of Communication at Marquette University. It features environmental documentaries, adventure films, and other media work with ecological themes, presented with the goal of raising awareness of sustainability, environmental justice, and ecological issues at the local and global level. We love it.

The film we’re most excited about, though, is “SOAR,” a 12-minute documentary directed by Matthew Grcic. The film’s title is an acroynm for Student Operation for Avian Relief, an inspiring, and successful, initiative to minimize bird-window collisions on the lakefront campus of Loyola University Chicago, where Grcic is a student.

The campus is beautiful, filled with new buildings designed with sustainability in mind, but like so many urban places across the country, several of its buildings have extensive glass in their facades. Too often, birds migrating along the lakeshore in the spring and fall collide with them. (See a list of affected species.)

SOAR is attempting to address this two ways. The first is through monitoring. Since 2012, during the fall and spring migrations, SOAR volunteers have walked the campus before sunrise, and again immediately after, to collect birds that have collided with windows. Injured birds are transported to the Willowbrook Wildlife Center, in nearby Glen Ellyn, Illinois, for assessment and, if possible, rehabilitation and release. Dead birds are recorded, identified, and then taken to the Field Museum, where they are added to the research collection.

SOAR’s second main activity is partnering with various campus groups to reduce the risks posed by Loyola’s buildings. SOAR worked with the Campus Facilities Department, for example, to automatically close the blinds of the university’s glassy four-storey Information Commons between midnight and dawn during the migratory periods, a simple step that has reduced the number of bird deaths each migratory season from 80 to as few as 2.

We think anyone concerned about bird-window collisions would learn much from SOAR, and from this documentary.

“SOAR” will be shown at the Great Lakes Environmental Film Festival in the 3 p.m. screening block this Saturday, April 23, in Marquette Hall, 1217 W. Wisconsin Avenue, in Milwaukee. Director Matthew Grcic will conduct a Q&A after the screening.