More than 1,700 organizations and businesses, including large and small bird-conservation groups, are calling on Congress to pass the $1.4 billion Recovering America’s Wildlife Act, which is being considered in both the House and Senate.

In April, the U.S. Senate Environment and Public Works Committee’s 15-5 bipartisan vote to advance the act brought it one step closer to becoming law. The bill has broad support in both parties (yes, really) and could come up for a vote in the next few weeks, possibly before Memorial Day.

“The Recovering America’s Wildlife Act is the most significant wildlife-conservation bill in half a century,” said Collin O’Mara, president and CEO of the National Wildlife Federation. “With more than one-third of all wildlife species in the United States at heightened risk of extinction, we are incredibly grateful for all of the Republicans, Democrats, and independents working together to advance this historic legislation that matches the magnitude of America’s wildlife crisis. Thank you to Chairman Carper, Ranking Member Capito, the members of the Senate Environment and Public Works Committee, and original co-sponsors Senator Heinrich and Senator Blunt for advancing this legislation to the floor.”

The Recovering America’s Wildlife Act would:

The law would fund desperately need conservation work that have been identified in State Action Plans. According to the National Wildlife Federation, a few focused on birds include:

Advocates for birds are calling on American birders to speak up for the bill and reach out to their members of Congress to get it passed. On Tuesday, May 24, Corina Newsome of the National Wildlife Federation and Tykee James of the National Audubon Society will host an online “Birders’ Rally” on Zoom to mobilize birders. They will be joined by special guests including Kenn Kaufman, the Cornell Lab of Ornithology, American Bird Conservancy, and more. Newsome provided this description of the event: 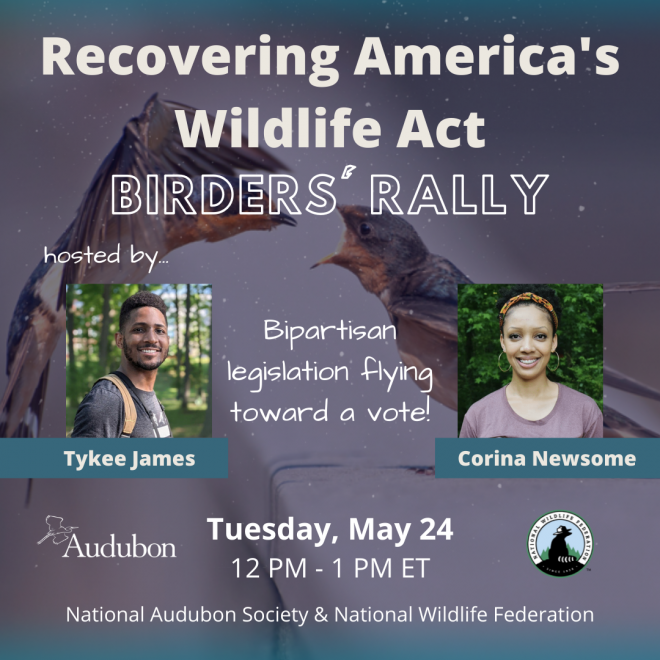 Calling all bird lovers! We need everyone who cares about birds to rally together for the passage of the Recovering America’s Wildlife Act. With historic levels of funding and support from both sides of the aisle, this once-in-a-generation legislation is a rare bird. Join us as we flock together in support of this critical bill, which will help protect birds long into the future and make the enjoyment of birds more accessible for all! Hosted by Tykee James and Corina Newsome, this rally will feature leaders in avian conservation and give you an opportunity to take action to encourage your Members of Congress to vote YES on this bill. Bring your passion and excitement, because we need YOU to push Recovering America’s Wildlife Act over the finish line!
If you would like to mobilize your networks to support this legislation, check out the Birder’s Toolkit, a resource full of social media, email, and letter templates to use as you encourage your communities and members of Congress to support Recovering America’s Wildlife Act.
You can register here.
Read our editorial, “Earth to Congress: Birds need help!”
American Bird Conservancy action: Send a letter about this bill to your members of Congress