Become a member and get exclusive access to articles, contests and more!
Start Your Free Trial
BirdWatching  •  News & Features  •  Conservation  •  Christy and the Cliff Swallow 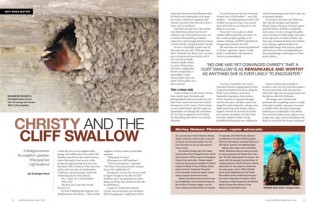 Under the eaves of my neighbor Bill’s garage, the brilliant face of an adult Cliff Swallow peered from the round entrance hole of her perfect mud nest at a little group of people peering back just a few feet below. Bill, in defense of his otherwise perfect driveway here in northeastern California, was preparing to knock the whole thing down with a broom.

“Because Terry [my wife] would disown you.”

No hint of lighthearted response, just deadpan looks and silence… Then another neighbor, Christy, asked a predictable question:

“What good are they?”

What good are Cliff Swallows?

“They eat mosquitoes,” I guessed. “We’ll have three percent fewer mosquitoes in the neighborhood.”

Mosquitoes, it turns out, are too small to figure strongly in the diets of Cliff Swallows, but I was desperate for something, anything, that would turn the tide of ambivalence.

I suppose I should have phoned Christy and owned up to my deception. Before hanging up, I might have tried to arouse her admiration by telling her that the little mom looking back at us spent the winter in Brazil or Argentina and intends to go back when her job is done. I mean, isn’t it wondrous?

And that’s just part of it: She and her mate built that architectural marvel without a trip to the hardware store, not to mention the sparkling aerobatics required to catch enough airborne insects to feed a family. And good looks? You bet!

So how is it possible to glaze over all that and come up with “What good are they?” Honestly, the Mona Lisa is an inert piece of canvas and some paint, and it sure can’t fly to South America, build a house, or catch a flying insect. All it does is hang there, but few would think it expendable. Is that because there’s just one, while Cliff Swallows are a dime a dozen?

As a young boy in North Dakota, Morley Nelson watched a falcon take a teal out of the air, and he was hooked. For the rest of his life, he was an advocate for birds of prey.

He worked closely with Tom Cade, the founder of the Peregrine Fund, which was formed in 1970 to save the Peregrine Falcon from extinction. Nelson helped convince the group to establish its World Center for Birds of Prey in Boise, Idaho, where he lived. Today the Peregrine Fund operates numerous raptor conservation projects around the world.

Nelson was also a falconer and a raptor rehabilitator, and he became famous for his films of hawks, eagles, and falcons. Using his trained birds, he created TV specials with Walt Disney Studios and Mutual of Omaha’s Wild Kingdom. His films with Disney included Rusty and the Falcon and Ida, the Offbeat Eagle.

Take a closer look
Come to think of it, the Mona Lisa has been copied, quite flawlessly, and photographed, and mass-produced, and that is how most of us know her without having been to the Louvre. But of course, no one would dispute that the copies are expendable, even though the marvelous Mr. da Vinci is apparent in all of them. No, but perhaps the Mona Lisa is beside the point.

Postscript: I do not plan to check whether Bill knocked the nest down. Its loss would not figure greatly in the scheme of things, and Bill’s hypothetical transgression remains just that.

But what does not remain hypothetical is Christy’s question. I guess I would prefer a world where such questions remain uncontemplated.

As a boy, I remember sad rows of Swainson’s Hawks hanging dead by their wings from barbed-wire fences along the Pinto Canyon Road in west Texas. September migrations from western North America to Argentina brought them by the place, and they rested tame along the roads in bunches, sitting in dry fields, partaking of the hordes of grasshoppers. Passers-by mistook the hawks for unsavory marauders and shot them from the windows of their trucks, probably thinking they were ridding the world of something awful. Such is the way of mistaken identity.

It was about this time, the 1950s and ’60s, that the energetic and talented Morley Nelson, the great friend of raptors, doubtless troubled by such scenes, set out to change the public mind. He filmed Golden Eagles and other avian superstars of southern Idaho. His close-ups transformed them from distant, wary, fleeing, unpleasant objects to respectable beings with purpose, depth, and mystery in their incomparable eyes, stunning plumage, and the grace of their aerial mastery.

Disney Studios joined Morley to produce a story of a boy who befriended a Prairie Falcon that, with characteristic dash, flew right into our living rooms and dazzled us with lofty brilliance.

The images were intimate and profound and compelling, and in a couple of decades of public exposure to an array of wildlife films, the idea of shooting a hawk became unthinkable. Even before laws arrived to fully protect raptors, most people were eager to share the planet with them, to marvel at their beauty and spirit.

Swallows are small to medium-size songbirds known for their exceptionally fast aerial acrobatics. The family includes about 89 species worldwide, including nine species in North America.

The Cliff Swallow is one of our most common species. It breeds from north-central Alaska to southern Mexico and east to Nova Scotia. In the contiguous United States, it is absent only from the southern states.

Two centuries ago, the species had been confined to nesting on the sides of cliffs in western mountains, but as people built barns, bridges, and culverts, the swallow found many more places to nest.

It is typically found in large colonies of up to 3,500 nests, although solitary nesting does occur. In fall, it migrates to lowlands in Argentina, southern Brazil, and possibly Paraguay.

So, Christy, take a close look at that real-life heroine looking back at you. Imagine she is you. Just take off anytime you want and jet around the neighborhood at a thousand feet, with handsome admirers in resplendent blue blazers and chestnut sideburns dancing alongside.

Turn south and follow earth’s verdant curvature all the way to another continent. Dodge that Merlin! Dodge that Bat Falcon! Get where you’re going and revel in the splendor of the tropics! Flit through the glorious rainbow mist of a great waterfall and partake of its myriad aerial offerings. Rest on a twig at the edge of a glistening green forest, busy with a thousand species, each as marvelous as your own.

After a while, let the spring tug of responsibility send you back across that impossibly vast landscape to beam confidently in on Bill’s minuscule garage. Imagine you and your husband diligently building a fabulous new house with the materials at hand, and then one day, peering out at the neighbors’ upturned faces. Do you like what you see?

Grainger Hunt is senior scientist for the Peregrine Fund’s California Condor and Aplomado Falcon restoration projects. Throughout his 40-year career as a biologist, he has conducted numerous field studies on the ecology of eagles and falcons. As a pilot, he has radio-tracked raptors on long-distance migrations and conducted aerial surveys of ranging, survival, and habitat selection.

How backyard birds benefit from the Duck Stamp

Connecting the dots for American Kestrel

Landbirds in need of conservation action

At 100, Migratory Bird Treaty Act more essential than ever

See our latest posts about conservation 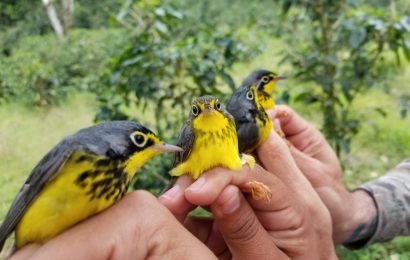 Wisconsin’s love for birds flies high — and nowhere is that more apparent than in the results of the 2021 Great Wisconsin Birdathon, the annual … END_OF_DOCUMENT_TOKEN_TO_BE_REPLACED 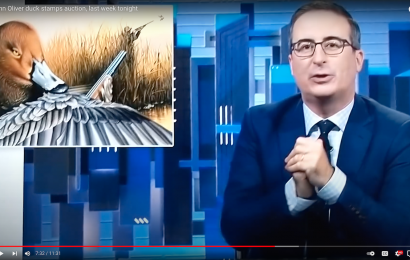 The host of “Last Week Tonight” is auctioning off five unorthodox paintings of ducks to raise funds for conservation.