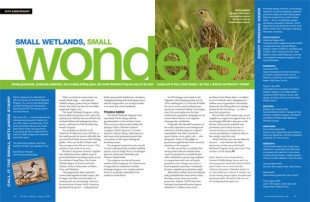 When we think of conservation, we usually think large – vast national wildlife refuges, parks as big as Alaska’s Denali. But small can have an incredibly important impact, too.

The Small Wetlands Program, a little-known federal program to save, parcel by small parcel, millions of acres of bird-rich wetland habitat and endangered native prairie, celebrates its 50th birthday this month (August).

You probably are familiar with Waterfowl Production Areas (WPAs), as the small parcels are known officially, but you won’t find them in many bird-finding guides. There are 36,000 of them, and they average a mere 90 acres in size. (The smallest is one-tenth of an acre.)

But here’s the power of small: Together they total about three million acres of protected habitat stretching mostly across the northern Great Plains, the Prairie Pothole Region of North and South Dakota, western Minnesota, northern Iowa, and Montana.

The program has been waterfowl-centered throughout its half century, but its impact has been much broader. Its small parcels are increasingly critical to the protection of many North American grassland bird species – and grassland birds, pressured by habitat loss, predators, changing farming and ranching practices, and fire suppression, are in deep trouble, even more than forest landbirds.

The Small Wetlands Program (and associated WPAs) along with the grassland plots in the northern Great Plains now provide priceless habitat for Sprague’s Pipit, Chestnut-collared Longspur, Baird’s Sparrow, Le Conte’s Sparrow, Nelson’s Sharp-tailed Sparrow, and many other grassland species that concentrate in the region during the breeding season.

The program was started because another federal program, the Department of Agriculture’s subsidized wetland-drainage program, was causing wetland losses to accelerate, especially in the northern Great Plains.

In 1958 changes were made in the Migratory Bird Hunting Stamp Act of 1934, enabling the U.S. Fish and Wildlife Service to secure small wetland areas, mainly for waterfowl habitat. Thus began one of the most audacious but least understood acquisition campaigns in our conservation history, a race against drainage tiles and ditches.

Originally, the intended recipients of the small experiment were beleaguered waterfowl, and they began to respond immediately. But other waterbirds – egrets, herons, terns, gulls, rails – also prospered. Today, it’s the plight of grassland songbirds that draws renewed attention to the program.

In 1989, researchers concluded that saving small isolated wetlands alone wasn’t as productive to waterfowl and other waterbirds as protecting wetlands in conjunction with tracts of nearby grassland, and a change was made in land-acquisition priorities. Grasslands became a significant acquisition target.

But just like a half century ago, we are caught in an urgent race against time. It is increasingly difficult to keep pace with the loss of the prairie wetlands and grass­lands, particularly because of current incentives to landowners to convert grasslands to cropland, often to bio-energy crops like corn.

What’s the best way you can help win the race – and celebrate the 50th anniversary of the successful Small Wetlands Program at the same time? You can buy a Duck Stamp.

Providing nesting, stopover, and wintering habitat for myriad bird species, waterfowl production areas are small birding gems. Most are located in the northern Great Plains — that is, the Dakotas, western Minnesota, and eastern Montana. (North Dakota alone has almost 40 percent of all WPAs.) Others are in Michigan, Nebraska, Wisconsin, and Iowa.

Centennial WPA
Big Stone County, Minnesota
Upland Sandpiper and other ­interesting shorebirds, grassland birds such as Bobolink, and all the usual waterfowl in season.

The Rainwater Basin Area, south of the Platte River in Nebraska, is sprinkled with WPAs that are packed with waterfowl in late winter, including Ross’s Geese, multiple species of teal, and other dabblers. Here are three:

Paul J. Baicich works closely with the National Wildlife Refuge System and is on the management board of the Prairie Pothole Joint Venture. He co-wrote (with Jim Williams) the feature “Unbirded Alaska” in our April 2008 issue. Warren P. Strobel is an award-winning foreign-affairs journalist and passionate birder. He and his wife Lisa run the birding blog Birdcouple.com.