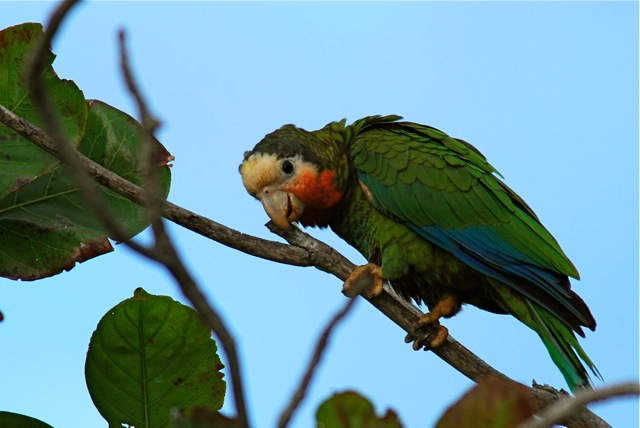 This bird is one of four subspecies of the Cuban, or Rose-throated, Parrot. In the Bahamas, it’s found mostly on Abaco with smaller numbers on Nassau. Habitat loss, the illegal pet trade, invasive cats and hogs, and other pressures caused the population to drop below 2,000 in the early 1990s. The birds nest in cavities in the ground, making them particularly vulnerable to non-native predators, flooding, and rising sea levels. To help the parrots, the Bahamas created Abaco National Park, and in 2009, a program to trap and remove cats was started. The species has since recovered, and according to a 2018 Birds Caribbean article, the birds numbered 8,832 on Abaco.

After Hurricane Dorian, Gardner says, for the Abaco population “there is once again concern that mortalities as a result of the storm and shortages in food in the aftermath may set back conservation efforts to protect that population and potentially threatening the long-term viability of the Abaco population when combined with the action of the other threats to the island’s parrots. But this will very much depend once again of the mortality rate and the state of the forests in the aftermath of the storm.”

A GoFundMe page was set up after the storm to raise funds to help the parrots.