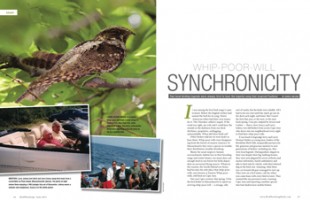 It was among the first bird songs I came to know. Before the English settlers had named the bird for its song, Native American tribes had their own names for it. The Cherokee called it waguli. If the wind was right, my wife and I could hear the sounds in the darkness from our deck: rhythmic, propulsive, unflagging, unmistakable. When did these birds eat?

Other birders told me we were lucky to hear them. Whip-poor-wills were disappearing from the forests of eastern America. In Massachusetts they were a species in trouble, their distribution steadily shrinking.

Blame the usual suspects: human encroachment, habitat loss in their breeding range and winter homes, too many deer, not enough food in our forests for birds dependent on nocturnal flying insects. Whatever the reasons, the woods behind our house had become the only place that whip-poor-wills, now known as Eastern Whip-poor-wills, still bred on Cape Ann.

One year I got a notion: that spring, I’d be the first birder in Massachusetts to report an arriving whip-poor-will — a strange, silly sort of vanity, but the birds were reliable. All I had to do was wait until late April, go out on the deck each night, and listen. But I wasn’t the first that year, or the next, or the next. Each spring, I was pre-empted by Avocet and Curlew — that is, Jerry Soucy and Larry Jodrey, two old birders from across Cape Ann who drove into my neighborhood every night to find their whip-poor-wills.

It was hard to begrudge Jerry and Larry. Premier birders as young men, leaders of the Brookline Bird Club, inseparable partners for life, generous and gracious mentors to new generations of birders, including me, they were local legends. Distinguished, elegant in their way despite their big, hulking frames, they were now plagued by severe arthritis and nastier infirmities, barely ambulatory and able to bird only by vehicle, with their beloved dog in the back seat. Amazing, what these two car-bound old guys managed to turn up: They were on a first-name, call-me-when-you-come basis with every bird in town. They seemed like my personal scouts, roaming Cape Ann and reporting countless species that had eluded more mobile birders.

“Whip-poor-will” was split into Eastern and Mexican Whip-poor-wills in July 2010 because of differences in vocalizations, mitochondrial and nuclear DNA, morphology, and egg pigmentation.

BREEDING RANGE: In southern and eastern Canada, from Saskatchewan to Nova Scotia, and in the United States, from Minnesota, Iowa, and eastern Kansas and Oklahoma east to the Atlantic coast.

WINTER RANGE: Throughout Florida and along the coast of Alabama, Louisiana, and Texas, and from there along the Atlantic slope of Mexico to Honduras and perhaps farther south.

WHEN TO LISTEN: Arrives in Alabama, Georgia, and South Carolina in late March–early April; in Arkansas the first week of April; in Cape May, New Jersey, in late April; and in Massachusetts from late April to late May. Migration peaks in Minnesota in early May, when whip-poor-wills arrive in Ontario. They arrive in Nova Scotia in mid-May.

WHEN TO LISTEN: Returns to Arizona in late April–early May and to New Mexico and southern California in early

I saw Jerry without Larry just once. On a raw March morning in 2001, an impromptu congress of birders had gathered in a dense suburban neighborhood in Malden to see an out-of-range Painted Bunting at a feeder. Unable to get a vantage point from his car, Jerry had to step out — the only time I ever saw him on foot. Shuffling along, he wore a bulky winter coat and red plaid pajama bottoms — no need for pants if you never leave the car. Of course, he’d seen many Painted Buntings in his time, but his face glowed when the bird, in its daring plumage, showed up. Larry would have loved the bird, too; only sickness or great pain could have kept him away. Three years later, Larry and Jerry both died, five months apart. After, whip-poor-wills continued to come to our neighborhood each spring, but, as if responding to a cue, they moved deeper into the woods. We could no longer hear them from our house.

One night, around dusk, I was reading William Faulkner’s “Barn Burning,” a story I’d meant to recommend to Jerry and Larry. I was working on an idea for an article: how writers we rarely associate with birds — Faulkner, Theodore Dreiser, Eudora Welty — use birds in surprising and powerful ways in their fiction.

I know the Faulkner story well; I’ve taught it to college students and prison inmates. Decades after the Civil War, Sarty Snopes, a 10-year-old boy, is torn between his troubled conscience and his loyalty to his father, Abner, a mean-spirited, abusive man, seething with grievance, who repeatedly manipulates situations to make himself feel wronged and then retaliates against his enemies by burning down their barns. With each arson, he enlists his young son to help him and then lie to substantiate his alibi.

Sarty struggles to believe in his father’s bravery and righteousness, but one night belief is strained too far. Abner prepares to set fire to yet another barn, with animals inside. In “grief and despair,” Sarty warns the owner of the barn, betraying his father, and then runs to the crest of a hill as gunshots ring out behind him. He spends the night there, cut off from his family and every other human connection.

I’d reached the end of the story, the whip-poor-will part. The scene still chills me. Sarty, determined to keep moving, instead falls asleep. When he wakes, just before dawn, he hears whip-poor-wills everywhere in the woods below him, “constant and inflectioned and ceaseless.” Sarty gets up. Alone but unafraid, as if drawn by the chorus of whip-poor-wills, he leaves his cruel father and old life behind and heads toward the “dark woods within which the liquid silver voices of the birds called unceasing — the rapid and urgent beating of the urgent and quiring heart of the late spring night. He did not look back.”

I put down the story. Instantly, I heard a sound outside a window. No, it couldn’t be, but it was — a whip-poor-will, in the yard, near the house, whistling in my ear, on and on. Afraid I’d spook the bird, I eased out on to the deck. I felt the presence of Jerry and Larry, I envisioned a boy alone in the night with urgent, beckoning birds, and I moved closer to the sound. A sense of wonder fought with a premonition of irrevocable loss. Then the bird flushed and rose, floated, fluttered erratically like a mammoth moth, suspended, just visible in the sky’s last light. Somewhere, spirits with bright eyes were watching with me.

John R. Nelson recently published a 100th-anniversary history of the Brookline Bird Club in the bimonthly journal Bird Observer. His essay on birds and dance, “Brolga the Dancing Crane Girl,” was awarded the prestigious Carter Prize for the best non-fiction article published in Shenandoah during the 2011-12 season. He wrote the article “Personal Ads” in our October 2012 issue, and he described Rockport Headlands in Massachusetts, Hotspot Near You No. 128, in December 2011. 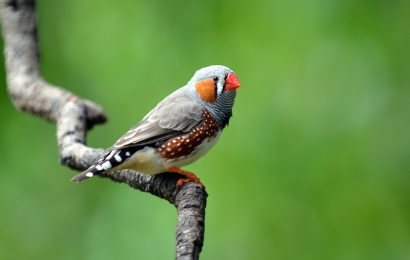 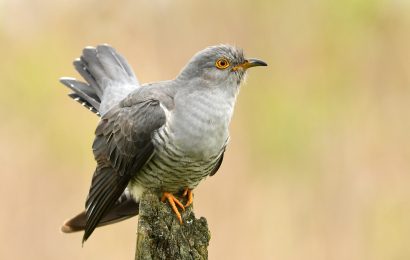 A study published June 25 reveals that bird population declines have been greatest among species that migrate to areas with more human infrastructure — roads, … END_OF_DOCUMENT_TOKEN_TO_BE_REPLACED