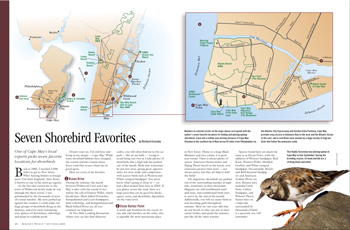 Back in 1985, I traveled 3,000 miles to get to New Jersey. Why? Among birders in foreign parts (I’m from England), New Jersey is known as one of the must-go regions.

As the bus that carried me to the town of Wildwood slowly made its way through the shore towns, I was gobsmacked by the thousands of acres of coastal marshes. My nose pushed up against the window, I could make out huge groups of shorebirds flying in the distance, and even more tantalizing were glances of dowitchers, yellowlegs, and peeps in roadside pools.

Twenty years on, I’m still here and living in my utopia — Cape May. While some shorebird habitats have changed, the coastal marshes remain intact. Every road that crosses them has its good spots.

Here are seven of my favorites.

During the summer, the marsh between Wildwood Crest and Cape May is alive with the sound of wee-willett, the call of Eastern Willet, which breeds here. Short-billed Dowitcher, Semipalmated and Least Sandpipers, both yellowlegs, and Semipalmated and Black-bellied Plover are all very common on migration.

At Two Mile Landing Restaurant (where you can also find delicious crabs), you will often find me in the car park — flat on my belly — trying to avoid being run over as I take photos of shorebirds that a high tide has pushed out of the marsh. Birds may sometimes be just feet away, giving great opportunities for close study and comparison with scarcer birds such as Western and White-rumped Sandpiper. You never know what’s going to drop in — we had a Red-necked Stint here in 2003. If you glance across the road, there is a large pool that can be good for ducks, egrets, terns, and shorebirds, dependent on the water level.

A sandy spit bordered by the ocean on one side and marshes on the other, this is arguably the most spectacular place in New Jersey. Home to a large Black Skimmer and tern colony, it is great year-round. There is always plenty of action. American Oystercatcher and Piping Plover breed on the beach; wire enclosures protect their nests — not always pretty, but they do help to find the birds!

On migration, shorebirds are pushed out of the surrounding marshes at high tide, sometimes in their thousands. Migrants are still northbound until mid-June, and southbound birds start to arrive by the end of the month. Additionally, you will see many birds in non-breeding garb throughout summer. Most are one-year-olds that do not breed, so they can stay in their casual clothes and spend the summer, just like all the other tourists.

Species found here are much the same as at Ocean Drive, with the addition of Western Sandpiper, Red Knot, Western Willet, Marbled Godwit, and White-rumped Sandpiper. Occasionally, Baird’s and Buff-breasted Sandpipers and American Golden-Plover are seen. Rarities have included Little Stint, Curlew Sandpiper, and Wilson’s Plover. Sunset here on a high tide surrounded by thousands of birds is a spectacle you will remember.

Many of the Red Knots that roost in Cape May also commute the few miles west to Delaware Bay. The bay shore is famous in late spring for horseshoe crabs. They come ashore to lay their eggs, which the shorebirds trough on. In recent years, the crabs have been harvested to make fishing bait, resulting in bird numbers crashing by about 90 percent from their peak. Reeds Beach, located southwest of Goshen, has traditionally been the best-known site, but recently, the road south out of Fortescue, west of the Maurice River in Cumberland County, has become the hotspot. Approximately 10 miles away at Bivalve, just south of Port Norris, large impoundments were made. At high tide, these are chock-a-block with shorebirds, although species variety is limited.

Unfortunately, I worked just a few miles away from this treasure for several years without knowing about it. A large sod farm located half an hour north of Cape May near Deerfield on Route 77, it is the best place in the state for American Golden-Plover and Buff-breasted, Baird’s, and Upland Sandpipers in September and October. After I found a Pacific Golden-Plover in 2001 (and Sharp-tailed Sandpiper in 2003), the spot sprang to prominence. The number of American Golden-Plover spotted at one time has reached 70 here, and several hundred pass through each season. The species is mostly seen as single birds elsewhere. It just goes to show what’s flying over. (Check your local fields!)

When most people think of New Jersey and birds, they think of two places — Brigantine and Cape May. Though known as “Brig,” this hotspot is actually the Edwin Forsythe National Wildlife Refuge and is a full half hour’s drive from Brigantine town, so don’t mess up. The refuge contains 20,000 acres of mostly salt marsh surrounding two large fresh-brackish impoundments. The Loop or Wildlife Drive is approximately 10 miles. On a still, hot summer’s day, the greenhead flies will eat you alive. Everything occurs here, but a scope is essential since many of the birds loiter quite a distance from the road. Whimbrels are common in the outer marshes, particularly in spring.

But it is the impoundments that attract most attention. They are the best place in the state for many birds. Long-billed Dowitchers often number hundreds, although picking them out among the Short-bills is fun! Pectoral, Stilt, Baird’s, and White-rumped Sandpipers — what the heck, just about everything that occurs in the Northeast occurs here. The refuge has even had all four species of godwit on the same day. Check the “Book of Lies” at the entrance to find what’s been about.

Last but not least, we come to my home patch. One of the reasons I came to live in Cape May was the South Cape May Meadows. Back then, with cows to manage it, the pools were an essential stopover for any migrating shorebird (and birder). Unfortunately, nowadays shorebirds are found only in drought conditions, and as each day passes, the meadows become more of a jungle. Still, it remains a nice place for a walk.

Although we think of muddy pools as the ideal shorebird habitat, the rock jetties here can be great. Purple Sandpipers are present from November to late May and are often mixed in with Ruddy Turnstones and — probably my favorite shorebird — Sanderling. On migration, other birds such as peeps can surprisingly be found feeding there too. Such is the beauty and appeal of shorebirds: You never know when, which, or where!

Richard Crossley traveled the world studying birds but fell in love with flight identification of passerines at Cape May. He is co-author of The Shorebird Guide and is the author or co-author of three books in the The Crossley ID Guide series: Eastern Birds, Raptors, and Britain and Ireland. Originally Published October 1, 2005