Become a member and get exclusive access to articles, contests and more!
Start Your Free Trial
BirdWatching  •  News & Features  •  Birdwatching  •  Right on time: Get help with fall warbler ID in our October issue 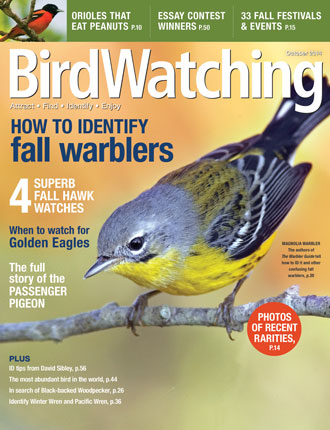 “Confusing fall warblers” — is this the most famous phrase in all of birdwatching? I think it may be — and with good reason, since pairs of migrants commonly seen at this time of year truly can be confusing.

But did you know that you can distinguish Blackpoll Warbler and Pine Warbler by tail length, facial pattern, and wingbars? Or that a buffy collar is a good mark to look for when trying to separate Blackpoll and Bay-breasted Warbler? And that Yellow-rumped Warbler isn’t the only warbler with a yellow rump?

These are just a few of the fall-warbler-ID nuggets you’ll find in Tom Stephenson and Scott Whittle’s excellent article in our October 2014 issue, on newsstands now.

See the contents of the October 2014 issue.

Tom and Scott, of course, are the co-authors of last year’s well-received identification guide The Warbler Guide (Princeton 2013). In their article, they share no fewer than 20 of their own photos to take the confusion out of autumn Blackpoll and Pine Warblers, Blackpoll and Bay-breasted Warblers, and drab birds with yellow rumps. Their message: identifying these birds is simpler than you think. You can do it.

Uxley, a naturalist for the Crawford County Park District in Ohio, has written about woodpeckers for us two previous times: In “Aspenglow,” he described why sapsuckers often choose to make their nests in living, not dead, trees, and in aspens in particular. And in “Winter Treat for Downies,” he told how goldenrods provide Downy Woodpecker with just what it needs to survive a long, cold winter. In “Firebird,” his latest article, he tells why hard-to-find Black-backed Woodpecker can’t resist a fire-scorched northern forest.

Nelson is a director of the Brookline Bird Club in Massachusetts. He wrote the essay “Whip-poor-will Synchronicity” in our June 2013 issue and the article “Personal Ads” in October 2012, and he described Rockport Headlands in Massachusetts, Hotspot Near You No. 128, in December 2011. In “Complicity,” his thought-provoking essay in our October issue, he describes a recent trip to Dallas, where the delights of staying in a modern atrium hotel came at an extra-high cost, discovered when he stepped outside and realized how many birds had collided with the building’s reflective glass windows.

If these three features aren’t enough to persuade you to pick up a copy of the October issue, consider this:

Yaki and Lipan Points, Grand Canyon National Park, Arizona
Hawks, eagles, falcons, and the occasional California Condor fly past this pair of hawk watches along the South Rim of the Grand Canyon. Jerry Liguori, the well-known author of three books and many articles on raptor identification and ecology, wrote our profile.

Ashland Nature Center and Hawk Watch, Hockessin, Delaware
Birders tally 10,000 to 20,000 raptors each fall at this site in northern Delaware. The biggest show happens September 15-25, when hundreds or even thousands of Broad-winged Hawks cruise can past in a day or even a few hours. One day in 2013, more than 7,000 hawks flew by. Joe Sebastiani, coordinator of the hawk watch, wrote our profile.

Chestnut Ridge Hawk Watch, Mt. Kisco, New York
A hawk watch north of New York City that regularly tallies the highest counts of any watch site in New York State. The biggest attraction is the Broad-winged Hawk migration in mid- to late September, but good numbers of Sharp-shinned and Cooper’s Hawks come a little later in the season, followed by Red-shouldered Hawks in late October and early November, and Golden Eagles and goshawks from late October through November. Tait Johansson, coordinator of the hawk watch, wrote our account.

Smith Point Hawk Watch, Smith Point, Texas
No place is better for raptor photography than this hawk watch on the shores of Galveston Bay, not far from Anahuac NWR in southeastern Texas. The birds come in low over the tower and often circle around, giving ample opportunity for photos. Hawk watch coordinator Susan A. Heath wrote our account.

Read about 11 hawk watches in 10 states to visit this fall, plus one not to miss in spring.

As usual, if you have a question about the October issue, or if you want to pass along a comment about the magazine in general, please send me an email. or leave a comment below. I’d be happy to hear from you and grateful for your input. — Chuck Hagner, Editor

See the contents of the October issue.

See our most recent Photo of the Week: Olive-backed Sunbirds.