A yellow male Northern Cardinal was found last week in a yard in Boynton Beach, Florida, on the Sunshine State’s southeastern coast. It is at least the 17th yellow male cardinal reported in southern and eastern states since 2016.

Vivian and Marina Sterijevski first saw the bird on April 7. Vivian is 9 and Marina turns 8 today. Their mom, Sascha Sterijevski, says that the girls put a homemade birdfeeder in a tree on April 6 and spotted the oddball bird the next day. “I thought maybe they were mistaken and that it was a female,” Sascha says. “They were adamant, so I looked it up.”

The Sterijevskis saw the bird every day for a week, but they haven’t spotted him for the last couple days.

The bird’s coloration is the result of a rare genetic mutation called xanthochroism — when yellow or orange plumage replaces a bird’s normal colors. In cardinals, the mutation is exceptionally rare. Only a handful of the approximately 120 million Northern Cardinals in the U.S. are likely to have abnormal plumage, but when that abnormality produces yellow feathers, the birds really stand out.

In 2018, a yellow cardinal in Alabaster, Alabama, went viral thanks to media attention and incredible photos by professional photographer Jeremy Black. He set up TheYellowCardinal page on Facebook, where he has documented not only the bird in Alabaster but also the sightings of other yellow male cardinals around the U.S. Based on information on his page, since 2016, at least 17 yellow cardinals have been seen, including the new bird in Boynton Beach.

Last October, Tracy Workman of Port St. Lucie, Florida, about 60 miles north of Boynton Beach, found a yellow cardinal in her yard. She has seen it on and off ever since and says a neighbor saw the bird last week, meaning the bird Vivian and Marina found is different. (Besides, cardinals don’t tend to disperse long distances.) Another Port St. Lucie resident noted a sighting in April 2019, about five months before Workman found her bird. So, the sightings from April and October could represent the same bird.

I made the below map of where yellow male cardinals have been spotted since 2016. All have been in southern states except one in southern Pennsylvania. The locations are based on Black’s information. 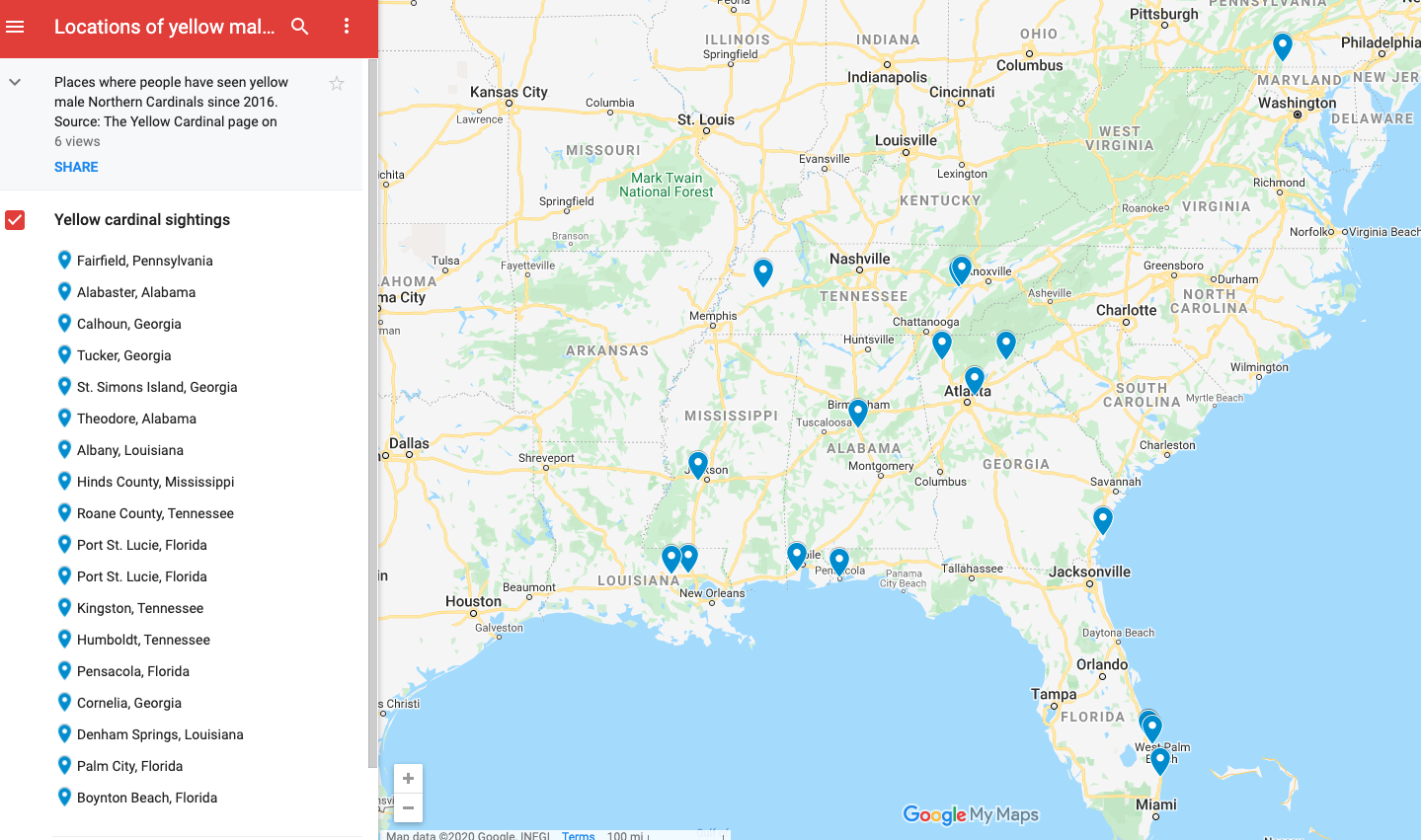 Prior to the Boynton Beach sighting, the most recent report occurred in January 2020 when a Palm City, Florida, resident spotted a yellow cardinal. Palm City is 50 miles north of Boynton Beach. A news article about the bird noted the close proximity of sightings around Port St. Lucie and Palm City. (We can add Boynton Beach to the list now.) In the article, Geoffrey Hill, a professor and curator of birds at Auburn University and an expert on bird coloration, said it’s possible that a genetic mutation that leads to yellow plumage is present in the area’s cardinals.

From the Treasure Coast Palm:

“There’s a lot of cardinals in that region,” Hill said. “It’s possible that the allele in that area of Florida is more likely to appear.”

An allele is a form of a gene that emerges by mutation and can be found in the genetic material of an organism, like a northern cardinal.

The mutation is analogous to albinism found in humans, Hill said. Like humans, all birds have DNA that is subject to mutations.

I asked Sascha Sterijevski why her daughters made the birdfeeder that attracted the unusual cardinal. She explains that she homeschools her three children (she also has a five-year-old son, Luke), so this wasn’t a project related to school closures due to the pandemic. In fact, her kids are really into birds.

The rest of the story is best told by Sascha:

“My oldest, Vivian, is a lover of birds and is always reading bird books and has at least one (if not ten bird books) from the library at any given moment. She made sure to pick up two bird guidebooks before the libraries closed.

“On March 29, we discovered a duck nesting right next to our front door. She is sitting on eight eggs. We are waiting for them to hatch any time now as they have a 28-day incubation. They wanted me to put food out for her, and I said no because she is wild.

“The idea for the bird feeder hatched from there. The girls figured if they couldn’t feed the duck, they might feed some other birds and attract them to our backyard tree, so they might nest there and have babies. They made a bird feeder out of sticks and leaves, but it wouldn’t stay in the tree. I told them to make a real one out of stuff we had around the house. And they came up with the plastic cup and yarn (and used a hole puncher). They asked for some bird seed and presto! Birdfeeder! That was April 6.

“We had a red cardinal come by that day, and Vivian informed me that cardinals are usually the first birds to discover new food sources like a birdfeeder. Which is why on the next day, when they told me they saw a yellow cardinal, I figured it was a female.

“Marina is my early riser of the three. She spotted the yellow cardinal and promptly went to tell Vivian. Then they both came running to tell me because photography is a hobby of mine, and naturally they knew I would want to take a picture. They have named the cardinal Igor since he has been back so many times.

“They have also attracted a crow that comes several times a day. They’ve named it Midnight. There is a chubby Blue Jay that is a bit of a bully, Mourning Doves, Northern Mockingbirds, some other unidentified birds, and even a green anole.

“Birdwatching has been a great source of entertainment and beauty on these days where we are home all day, which is definitely NOT normal for us.”

Congrats to the Sterijevski family for their remarkable sighting, and thanks for letting us tell the story!

Half-male, half-female cardinal is cool, but it’s not drawing a crowd

Engaging and delightful 20-minute documentary highlights an old tree stump that attracts falcons, owls, hawks, and other raptors in winter.

The good news, says a BirdLife International scientist: ‘If we give nature a chance, it can recover.’