One of our favorite articles — a feature about the hooting, breeding, and hunting habits of the Great Horned Owl — has been named Outstanding Popular Article by the Texas Chapter of the Wildlife Society. 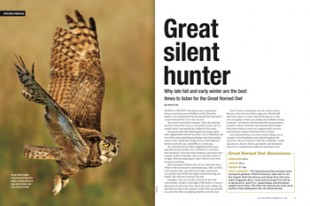 We published the article in the December 2012 issue of BirdWatching. Read it online.

The article was written by Texas wildlife biologist James D. Ray, pictured at right above, and features the stunning photography of Tim Fitzharris, Glenn Bartley, Rob McKay, and Alan Murphy, who took the shot of the owl in flight on the opening spread.

He received the award at the Texas chapter’s 50th annual meeting, which took place in February 2014 in Austin, Texas.

“I’ve always had a fascination with owls,” he wrote in his article. “As a youth, I monitored nests that Great Horned and Barn Owls placed in the rim of Rita Blanca Canyon, south of Dalhart. Even today, I work with Barn and Burrowing Owls, and I delight in listening to the calls of Eastern Screech-Owls and Great Horned and Barred Owls whenever I visit creek and river bottoms in the Panhandle.”

The Outstanding Popular Article award, says Clint Boal, chair of the Texas chapter’s publications awards committee, was based on “the distribution and breadth of readership of the outlet, the clarity in presentation of material for a popular audience, and the management or conservation relevance of the material presented in the paper.”

Boal is professor and assistant leader of the USGS Texas Cooperative Fish and Wildlife Research Unit at Texas Tech University.

The Wildlife Society, founded in 1937, is an international, non-profit scientific and educational organization serving and representing wildlife professionals in all areas of wildlife conservation and resource management. The Texas chapter was formed in 1965.

See photos of Great Horned Owl in our galleries.

Read how a birdwatcher found all 13 of Arizona’s owl species in one year. 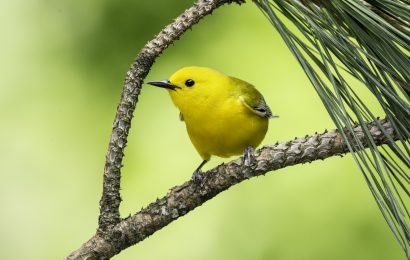