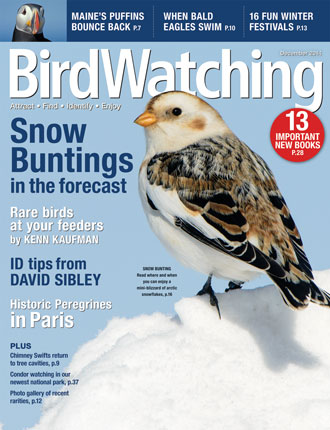 Exciting news: Peregrine Falcons are nesting in Paris, France, for the first time in over a century. You can read all about them in our December 2014 issue, available on newsstands today.

See the contents of our December 2014 issue.

The falcons were first spotted in the vicinity of Gustave Eiffel’s famous tower in autumn 2011, but they didn’t nest until 2013.

Mark Hedden, author of our entertaining article, teamed up with a Parisian falcon fanatic to locate the birds in the city in 2012. And he succeeded. Shortly after his visit, a nest box for kestrels located on a tall, slender chimney near the Eiffel Tower was renovated to accommodate falcons, and a motion-activated video camera was installed.

The historic Peregrine pair, nicknamed Yaca and Yaco by kindergarten students in the 15th Arrondissement, occupied the box the following spring. The falcons laid three eggs, which hatched in April — the first to do so in the city since the end of the 19th century.

Looking to repeat their success, Yaca and Yaco returned and laid four eggs in late February 2014. All hatched. Three of the new falcons left the nest box the morning of May 18. The fourth, perhaps hesitant to leave an apartment with such a good view, didn’t test his wings until the 22nd. It’s a great story — we’re delighted to be the only American magazine to bring it to you — but there’s more.

Our December issue also contains our year-end roundup of new books about birds (I’ve listed them below) and an in-depth article about the Snow Bunting, the pretty bird on our cover. The species breeds in the High Arctic, but as author John Kricher explains, it flies south each winter, delighting birdwatchers in the upper Great Plains, Great Lakes states, and the Northeast.

Also in the issue:

Pete Dunne relates the remarkable tale of how today’s binoculars got so good… Kenn Kaufman describes Harris’s Sparrow and four other species that are known to wander widely in winter… And David Sibley identifies the feathers that give birds their streaks and spots.

What’s more, the issue contains important bird news, a list of festivals and events, profiles of birds migrating right now, our popular gallery of rare-bird sightings, and page after page of big, colorful photos of birds taken by readers like you.

I think you’ll like it. Please pick up a copy and then let me know what you think. I look forward to hearing from you. — Chuck Hagner, Editor

Books we selected for our year-end roundup

Sierra Wings: Birds of Mono Lake Basin, by Marie Read, and Everglades: America’s Wetland, by Mac Stone – A pair of books filled with gorgeous photos we didn’t have room to publish in the magazine.

One Came Home, by Amy Timberlake, and A Message from Martha: The Extinction of the Passenger Pigeon and Its Relevance Today, by Mark Avery – Two books that are so smart you’ll want to share them.

Welcome to Subirdia: Sharing Our Neighborhoods with Wrens, Robins, Woodpeckers, and Other Wildlife, by John M. Marzluff – An urban ecologist tells why suburbs are good (and bad) for birds.

Reflections on a Golden-winged Warbler: The Joys and Aesthetics of Birding, by Douglas E. Chickering – Essays from Massachusetts about birds and birding.

The Eponym Dictionary of Birds, by Bo Beolens, Michael Watkins, and Michael Grayson – A who’s who of the people whose names were given to birds.

The Lost Bird Project, by Todd McGrain, and Ghosts of Gone Birds: Resurrecting Lost Species Through Art, by Chris Aldhous – Two artists challenge us not to forget lost birds.

See the contents of our December 2014 issue.