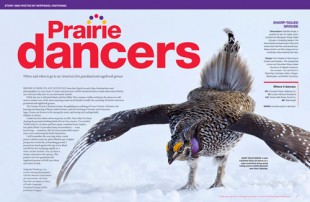 Before sunrise on any given day from late March to early May, birdwatchers and ­photographers in more than 15 states and provinces will be hunkered down inside observation blinds, eyes and ears fully alert to any movement outside.

While the sky is still pitch black and the Milky Way remains visible overhead, the observers will wait to witness one of the most amazing events in the birder’s world: the courtship of North American grassland and sagebrush grouse.

The Greater Prairie-Chicken’s boom, the gobbling or yodeling of Lesser Prairie-Chickens, the hooting and dancing of Sharp-tailed Grouse, and the strutting of Greater and Gunnison Sage-Grouse are known to be among the most captivating and unforgettable displays in nature.

I made my first observation of grouse in 2001. Since then I’ve been chasing the ground-dwelling birds all over the country. I’ve traveled 78,000 miles in 14 states and have spent countless hours inside a tiny photo blind. It provided many extraordinary — even harrowing — moments. But the most memorable experiences were witnessing the birds themselves.

I still remember the morning when a male prairie-chicken used my photo blind to get a higher perspective on his lek, or breeding ground. I pressed my hand against the top of my blind and felt his feet stamping rapidly in a semi-circular motion. You can have a similar experience this spring. This guide to our five grassland and sagebrush grouse will tell you where and when to look.

See our map to 49 grouse-viewing locations in North America.

Description: Spotted wings, a ­purplish air sac on males, and a pointed tail distinguish Sharp-tailed Grouse. In breeding season, the birds advance toward each other and stamp their feet like mechanical toys. Males stretch out their wings and run erratically while shaking their tails.

Range: From Alaska to Wyoming to Ontario and Quebec. The sub­species known as ­Columbian Sharp-tailed Grouse is of highest conservation concern. You can find it in Wyoming, Colorado, Idaho, Oregon, ­Washington, and British Columbia.

WHEN: Activities peak in late April.

Description: About a third smaller than Greater Sage-Grouse. Males have larger crests and more distinct white bands in their tail feathers.

CO: The only lek available to public viewing is located at the Waunita Watchable Wildlife Site, 19 miles east of Gunnison just off Hwy. 50. Open April 1 through May 15. For more details, visit www.siskadee.org.

WHEN: Booming activities peak around the first week of April, when the number of birds visible may reach as high as 100.

Plus:
Information, tips, and suggestions for viewing the Gunnison Sage-Grouse
Bureau of Land Management

Update, March 2018: Previously posted information in this article about tours in Utah to see Gunnison Sage-Grouse has been removed because it was outdated.

Description: Our largest grouse; speckled gray above with a long spiky tail. Males have black throat and belly, white breast. In breeding display, males fan their tail, expand their breast, and briefly expose two yellow patches of bare skin on the lower throat. Their strut is marked by a rapid wing-swish and a vertical upward jerk of the head.

WHEN: Breeding displays begin in late March, peak in early April, and continue into late April.

Out in front
Conservation efforts on behalf of Greater Sage-Grouse have picked up steam in 10 western states due to a 2015 federal deadline to decide whether the species will be listed under the Endangered Species Act. Learn more at www.blm.gov/sagegrouse.

WHEN: Booming peaks from late March to mid-April and ­continues into early May.

Description: A stocky grouse with brown bars across its body and a rounded tail. Displaying males have yellow-orange air sacs. Groups of 8-20 males gather on leks. During the display, they rapidly stamp their feet and boom by expanding their air sacs. Their booming calls can be heard for more than a mile.

WHEN: Booming peaks from late March to mid-April and continues into early May. The best viewing is typically in mid-April, when ­females start to check out males.

Attwater’s hanging on
Attwater’s Prairie-Chicken is an ­endangered subspecies of Greater Prairie-Chicken. In February 2019, it numbered about 200 birds and is found only in south­eastern Texas. You can see it during a festival March 28-29, 2020, at Attwater Prairie Chicken National Wildlife Refuge west of Houston.

49 grouse-viewing locations
The grouse hotspots listed above and many others are plotted on this Google map (right). In all, we’ve highlighted 49 places in North America to see Sharp-tailed Grouse, Greater Sage-Grouse, Gunnison Sage-Grouse, Greater Prairie-Chicken, and Lesser Prairie-Chicken. Use the map to find a location near you to watch grouse!

Noppadol Paothong is an award-winning photographer with the Missouri Department of Conservation. His book, Save the Last Dance: A Story of North American Grassland Grouse, will be published in August.

Spending time with offspring is critical to their survival, research shows.