I don’t know about you, but I’m worried.

With every major wildfire, long-term drought, hurricane, and other extreme weather event, the planet’s health seems to be getting worse and worse. Will we find the political will to tackle climate change, deforestation, and our many other environmental problems?

It’s hard for me to remain optimistic, but thanks to A Fierce Green Fire, a documentary airing on PBS tomorrow, April 22, Earth Day, I’m not without hope.

The film is not to be confused with Green Fire: Aldo Leopold and a Land Ethic for Our Time, which debuted on PBS on Earth Day 2013 and is airing again on select PBS stations this month. Leopold’s essay “Thinking Like a Mountain” inspired the titles of the two movies. In it, he describes his experience as a young ranger shooting a female wolf. Upon reaching the animal, he sees “a fierce green fire dying in her eyes. I realized then, and have known ever since, that there was something new to me in those eyes, something known only to her and to the mountain. I was young then, and full of trigger-itch; I thought that because fewer wolves meant more deer, that no wolves would mean hunters’ paradise. But after seeing the green fire die, I sensed that neither the wolf nor the mountain agreed with such a view.” 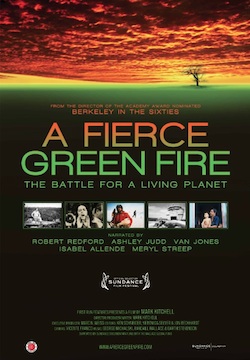 A Fierce Green Fire traces environmental activism from the 1960s to 2009. It covers a lot of ground, including Rachel Carson’s Silent Spring, the 1969 fire on Cleveland’s Cuyahoga River, the first Earth Day in 1970, and the dumping of PCBs in predominately black Warren County, North Carolina, in the 1980s. What could be a dry history lesson, however, is in fact a lively and eye-opening film that uses present-day interviews, archival footage, and an engaging soundtrack to tell its story. It’s narrated by Robert Redford, Ashley Judd, Meryl Streep, best-selling author and green-jobs advocate Van Jones, and Chilean novelist Isabel Allende.

Oscar-nominated director Mark Kitchell’s original 114-minute film debuted to five sold-out screenings at the Sundance Film Festival in 2012; a 101-minute version opened in theaters in a few cities in March 2013. While I’m happy to see the film receiving a nationwide airing now, I was disappointed to learn that we won’t see the full movie on PBS; instead, it was cut to just under an hour to fit into the network’s schedule. A few critics said Kitchell crammed in too much material in the nearly two-hour film; at times, the PBS version feels positively rushed.

Nevertheless, it’s worth your hour because it tells the stories of four victories that environmentalists won — stories that give me hope that today’s wrongs can be righted. (And if you want to see the full movie, you can find it on iTunes and on DVD.)

The victories: stopping the damming of the Grand Canyon; forcing the U.S. government to declare Love Canal, a section of the city of Niagara Falls, New York, a disaster site due to a toxic soup of pollutants below its homes and schools; the 1986 moratorium on commercial whaling; and the establishment of protected forests in the Brazilian Amazon. All four wins came only after long struggles and tremendous sacrifice.

I’d never heard of the plan to dam the Grand Canyon and was astonished to learn how close it came to reality. If it had gone through, would we have California Condors flying around the canyon today?

Fair warning: The film includes images of seals and whales being slaughtered that are chilling and difficult to watch. But when the videos first reached the public’s attention in the 1970s and ’80s, they sparked outrage, which led to the whaling moratorium. I should note, however, that despite the ban, whaling has not been halted entirely. Just last week, Japan said it would resume hunting whales off Antarctica in 2015.

The whaling segment also gives us a glimpse into the mindset of people who act on their beliefs to protect wildlife and natural resources. Paul Watson, co-founder of Greenpeace and founder of the Sea Shepherd Conservation Society, recalls trying to stop a Russian whaling ship from harpooning sperm whales:

“Why were the Russians killing these whales? They didn’t eat sperm whale meat, but they did use spermaceti oil to make high-heat-resistant lubricating oil for machinery, and one of the pieces of machinery that they used it in is the manufacture of intercontinental ballistic missiles. And I said, ‘Here we are destroying this incredibly beautiful, intelligent, socially complex creature for the purpose of making a weapon meant for the mass destruction of humanity.’ And that’s when it came to me like a flash: We’re insane. We’re just totally insane. And from that moment on, I decided that I work for whales, I work for seals, I work for sea turtles, and fish, and seabirds. I don’t work for people.”

Watson has been featured on the Animal Planet series Whale Wars and has received numerous awards for his conservation work; in 2012, he was presented with the Jules Verne Award, dedicated to environmentalists and adventurers, a prize previously given to Jane Goodall and Jacques Cousteau. He continues to advocate on behalf of whales and other marine life to this day.

Climate change, the subject of the film’s final chapter, is described as “impossible to deal with and impossible to ignore.” Kitchell recounts the lack of progress on dealing with climate change at international meetings in Rio de Janeiro, Kyoto, and Copenhagen, frequently due to American roadblocks.

“Do we have to have a hurricane take out Miami” to force the world to act? asks the late climate scientist Stephen Schneider of Stanford University. “What a hell of a way to run a planet.”

Still, the director leaves us with a ray of hope. Author and environmentalist Paul Hawken tells Kitchell that around the globe, two million organizations work for the inseparable issues of social justice and environmentalism. Taken together, the groups, Hawken says, are not a movement but “humanity’s immune response to the despoliation of the environment, to the degradation of living systems, to the corruption we see in economic systems, and to the pollution of the industrial system.” — Matt Mendenhall, Managing Editor

Why Jane Goodall see hope in spite of the conservation crisis