Become a member and get exclusive access to articles, contests and more!
Start Your Free Trial
BirdWatching  •  News & Features  •  Birdwatching  •  Now on newsstands: A December issue filled with winter wonders 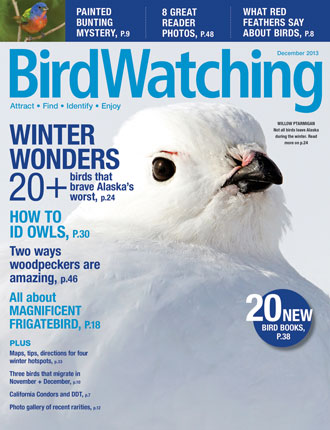 Our December 2013 issue goes on newsstands today! The snowy white bird on its cover is a Willow Ptarmigan, just one of many amazing birds featured in the issue.

See the contents of the December 2013 issue.

The bird truly is a winter wonder. Writer Bjorn Dihle, author of the article “Year-round in the Arctic,” found flocks of the hardy ptarmigan while hiking above the Arctic Circle in the freezing cold of an Alaskan winter!

The cover photo came from someone who knows a thing or two about northern birds and the cold — the well-known Finnish photographer Markus Varesvuo (pdf). He’s is an often-exhibited, award-winning photographer and a founding member of the photo agency known as Birdphoto.fi.

You may also know him as the author or co-author of several beautifully illustrated books, including The Handbook of Bird Photography (Rocky Nook, 2013), which he wrote with fellow wildlife photographers Jari Peltomäki and Bence Máté. We wanted his close-up of the ptarmigan the moment we saw it, and we thank Markus for sharing it.

Read an interview with Markus Varesvuo.

Funny thing, though: Not all of the winter wonders in our December issue are found in cold places. Consider the well-named Magnificent Frigatebird. As Mark Hedden writes in our December issue, the balmy Florida Keys, the southernmost region in the continental United States, is the northernmost edge of the frigatebird’s Caribbean range.

Mark is a birding guide in Key West who blogs occasionally at www.boneisland.com. He’s also one of our favorite writers. In previous issues, he’s written about pelagic birding, hawk watching in the Florida Keys, and Miami’s exotic birds. Here he describes what wildlife biologists have learned recently about the long-winged frigatebird’s health and surprising habits, including the amazing distances it flies — often at night.

His article “Always Around but Never Close” is a great read, and it was made all the better by our friends at the Avian Research and Conservation Institute, whom the U.S. Fish and Wildlife Service has enlisted to help study the frigatebird. ARCI generously let us publish one of their maps showing the astounding flights of a bird, a female, that they outfitted with a GPS locator and a satellite transmitter. You wouldn’t believe where she flew!

Best of all, the issue also contains our latest roundup of notable new books about birds. To prepare it, Managing Editor Matt Mendenhall and I evaluated dozens of recently released books and hand-picked 20 that we feel belong in your library. Our selections include four important new field guides and fascinating books about urban wildlife, Donald Culross Peattie, and the birds of the Bible.

Please take a look, then let me know how you you like it. Leave a comment below, or send me an email. I look forward to hearing from you. — Chuck Hagner, Editor

See the contents of the December 2013 issue.

Read my editorial from the issue.

Explore all the Tablet Extras that we published in the December issue.

Last summer, we reported on a program formed by birding groups in Maryland and the District of Columbia that would provide scholarships for Black and … END_OF_DOCUMENT_TOKEN_TO_BE_REPLACED