Over the last few weeks, we have been running a fun bird-themed bracket inspired by the college basketball tournaments. Our 2022 Most Wanted Birds bracket challenge asks anyone who wants to take part what birds they most want to locate in the wild. We started with 64 species in four categories: Seabirds & Waterbirds, Songbirds, Raptors & Owls, and Everyone Else, which included grouse, hummingbirds, rails, and other species.

After four rounds, we’re down to our last four, the “victors,” so to speak, in the four sections of the bracket. The matchups in this round are: 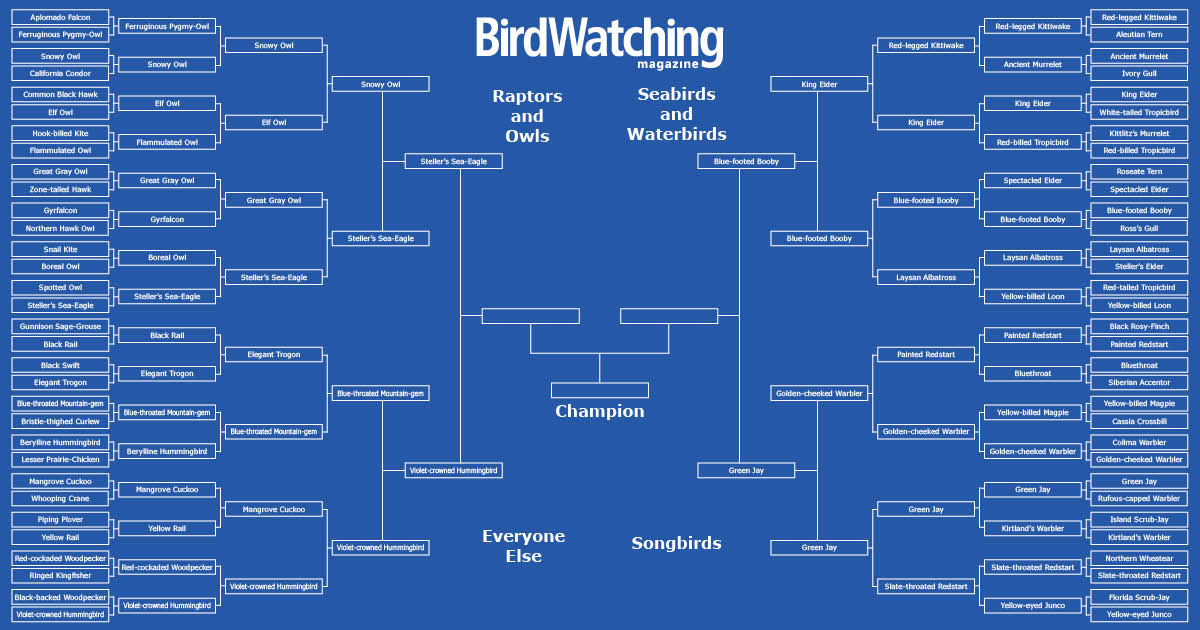 If you need some background on the four contenders, we’ve got you covered.

This huge raptor is found primarily in eastern Russia, Korea, and Japan. It has wandered over to Alaska several times, making it a Code 4 species according to the American Birding Association’s checklist.

As you probably know, an individual Steller’s Sea-Eagle made headlines over the last few months, when it turned up in eastern Canada and then flew south to Massachusetts and later Maine. It has been hanging around the coastal area near Georgetown, Maine, and it was last seen on March 5, according to Maine Audubon.

This wayward raptor likely inspired many of the votes for Steller’s Sea-Eagle in the first four rounds.

The most reliable place to see it in Arizona is the Paton Center for Hummingbirds, formerly known as the yard of the late Wally and Marion Paton. Birders report the species on eBird at the Paton Center year-round. The species, rated as Code 2 by the ABA, can also be observed at Ramsey Canyon and Miller Canyon, two of the best birding spots in southeastern Arizona, and it has been recorded at many other locations in Arizona and New Mexico, as well as a few in California. Vagrants have been found north of San Francisco and as far east as the mountains of Virginia.

This seabird with its comical blue feet lives on islands and shorelines of the Pacific, from the Baja California Peninsula of Mexico to central Chile. Birders who visit the Galapagos are sure to see it, as the species occurs on virtually of the famous islands in the archipelago.

Blue-footed Boobies have been seen now and again farther north in recent years, along the California coast, and in 2018 at Cape Meares State Park on the Oregon coast. Vagrants have also turned up inland – in Utah and eastern New Mexico. The bird is rated a Code 4 by the ABA.

The only U.S. record in the last 12 months, according to eBird, was a group of up to three boobies that were on Santa Barbara Island, southwest of Los Angeles, from July to early October 2021.

Our most handsome corvid occurs from southern Texas to Honduras. And another population, which may be a separate species, is found in northern South America.

In Texas, the Code 2 species used to be confined to the southern tip of the state, but its range has expanded northward almost to San Antonio.

If you visit the Lower Rio Grande Valley, watch for the bird at a variety of the famous birding sites along the river, from Sabal Palm Sanctuary to Santa Ana National Wildlife Refuge, as well as other sites like South Padre Island, King Ranch, and many others. It prefers woodlands with brushy understories.

Let us know which birds you want to see the most by voting today or early on Saturday on one of our social media pages: Twitter, or our Facebook or Instagram Stories.

We’ll announce the two species that make it to the championship round early next week, and we’ll announce the winning bird next Friday. Want to be the first to know who wins? Sign up for our e-newsletter.

The show will take viewers into the wild, wonderful, and unpredictable world of birds.