Become a member and get exclusive access to articles, contests and more!
Start Your Free Trial
BirdWatching  •  News & Features  •  Birdwatching  •  Film about Central Park and its birders explores birdwatching, ‘this deeply human activity’ 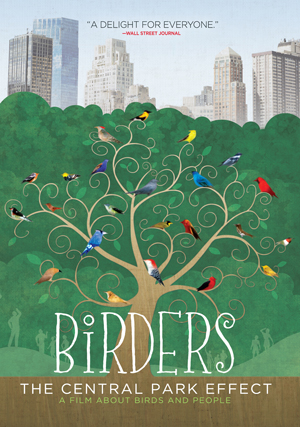 Birders: The Central Park Effect debuted on HBO in July 2012. I reviewed it on an earlier version of this website that year on July 12. What follows is my review, updated slightly.

The birds and birders of New York City’s Central Park have been described in our magazine and others numerous times. They’ve been the subjects of great books like Red-Tails in Love, Birds of Central Park, and Central Park in the Dark. And who-knows-how-many blogs and websites are devoted to the topic.

Now, a fantastic new hour-long documentary puts the birds and birders of Central Park on film. Birders: The Central Park Effect debuted on HBO on July 16, 2012, and is available on Netflix, iTunes, Amazon Instant Video, Goggle Play, and DVD. Legendary birder and tour leader Victor Emanuel called it “the best film about birding that I have ever seen.” I wholeheartedly agree.

Jeffrey Kimball, the film’s producer, director, and cinematographer of all its bird and nature footage, provides a few bits of off-screen narration to set the stage. Mostly, he tells the story through interviews with birdwatchers and scientists young and old, famous and not.

He begins in spring, the most exciting time of year to bird the park, then proceeds through summer, autumn, winter, and the following spring. Woven throughout the film are gorgeous images of Great Egret, Black-throated Blue Warbler, Baltimore Oriole, Cooper’s Hawk, Hooded Merganser, and dozens of other species. (Birders who make lists of birds they see or hear in films will be busy keeping track of all the birds here!) Before I say more, here are shots of a few of the birds from the movie:

If Kimball had focused simply on the birds, however, he would have had a 10-minute short at most. After all, the reason Central Park is great for birds is simple: when they’re migrating, they need a place to eat; Central Park is a big oasis in the urban jungle; and consequently, birds show up. John Fitzpatrick of the Cornell Lab of Ornithology and Red-Tails in Love author Marie Winn explain that aspect of the story quite well for Kimball.

It is the birders’ descriptions of why they bird and what birds mean to them that make the film so enjoyable and heartwarming. They give the movie an emotional anchor not often found in nature documentaries. It’s a safe bet that HBO would not have picked up the film had it focused solely on birds.

“HBO is the ideal home for ‘The Central Park Effect’ and gives us the ability to tell an important story to millions of people,” Kimball told Indiewire in March 2012. “Even though it’s set in the middle of New York City, this is a story about people’s connection to nature. It’s important for us to realize that as the world becomes more urbanized, nature doesn’t have to entirely disappear from cities.”

The people we meet — and won’t soon forget — include: 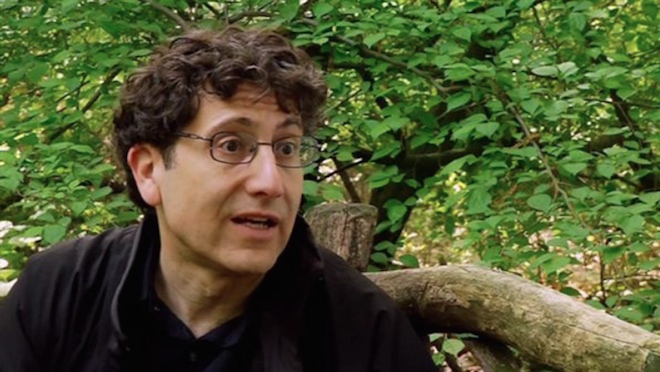 Jonathan Rosen. The author of the bestseller The Life of the Skies: Birding at the End of Nature and other books describes the moment 15 years earlier when he first learned about warblers and that they’d soon be migrating through Central Park. The discovery, he says, changed his life.

“I don’t think of it [birding] as a hobby any more than I think of raising my children as a hobby,” he tells Kimball. “You’re simply embedded in this deeply human activity.” 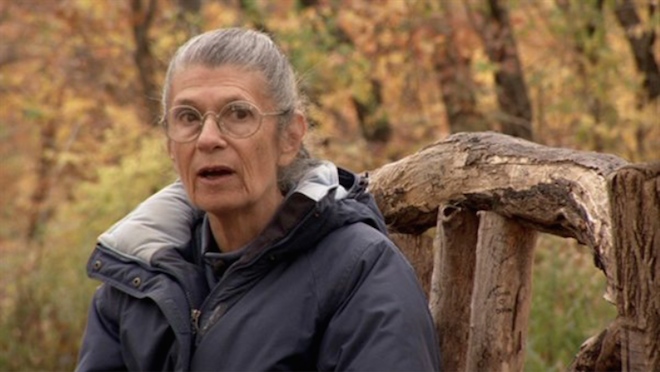 Starr Saphir. She was “the matriarch of Central Park birders,” says one regular birdwatcher. Saphir (pronounced “sapphire”), who died on February 5, 2013, after an 11-year battle with breast cancer, led bird walks four times a week in spring and fall for almost 40 years.

In the film, Kimball shows her in action, finding birds and pointing them out to others. When she says, “I could keep this up for hundreds of years,” it’s obvious that she’s not joking. Kimball also visits her at home, where she shows him her notebooks in which she records her daily sightings. “I have about 80 notebooks altogether,” Saphir says.

She also reveals that she has terminal breast cancer, but it doesn’t seem to have slowed her down. If anything, she seems to appreciate birds more. “Looking at birds,” she says, “really takes away sadness in a lot of us. Looking at birds takes you out of yourself into the real world.”

Watch a video tribute to Saphir and read her obituary in the New York Times. 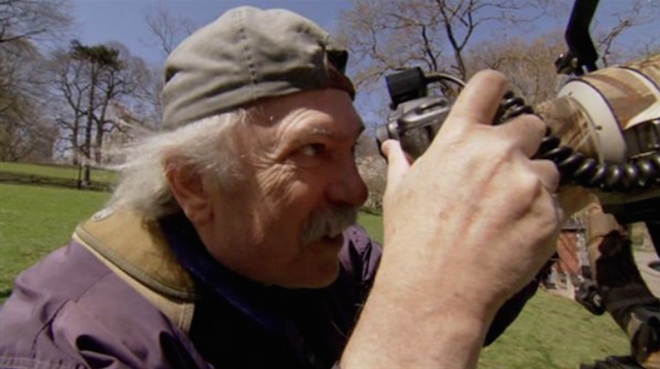 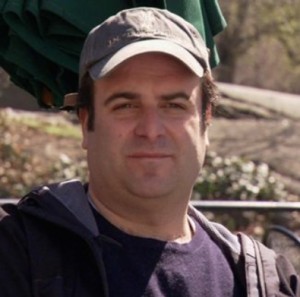 Lloyd Spitalnik (above) and David Speiser (right). The photographers and good friends bird the park often. Both have contributed to BirdWatching.

David’s photo of a Yellow Warbler was on our June 2012 cover, and Lloyd’s shot of a Cooper’s Hawk appeared on our October 2013 cover. When asked if they ever got tired of looking at cardinals, their answer is immediate: “No!”

Lloyd continues: “How could you? Honestly, how could you? If you get tired of looking at the common birds, you might as well just pack it in.” Something tells me he and Maeve Kim, author of our August 2012 essay “Born-again Bird-watcher,” are kindred spirits.

Later, David and Lloyd lament the decline in overall numbers of birds that visit the park. Lloyd calls it an “unbelievable decrease.” 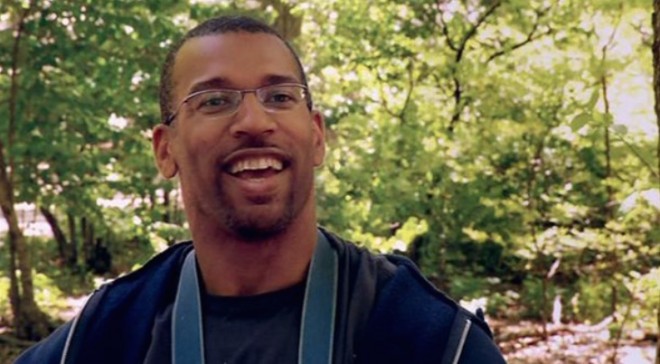 Chris Cooper. One of the park’s regular birders whose enthusiasm for birds is infectious. We watch him calling a fellow birdwatcher on his cell phone to report a Prothonotary Warbler, see him craning his neck to get a view of birds high in the trees, and learn that his friends don’t understand his obsession. “They know from experience, from April 15 to Memorial Day, they won’t see me… because I’m birding.” 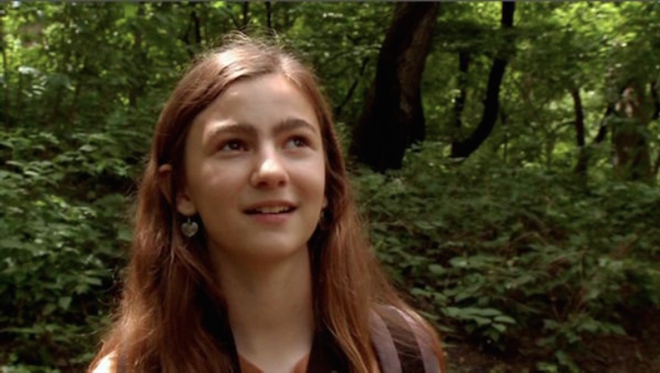 Anya Auerbach. For me, 15-year-old birder Anya is the heart and soul of the movie. She takes her binoculars everywhere (except school), has dreams about birds, and simply loves to watch birds. She’s a bright, happy young woman who interrupts herself to call out bird IDs. Perhaps her presence in the film and her zeal for birds will inspire more young people to get outside and explore nature. 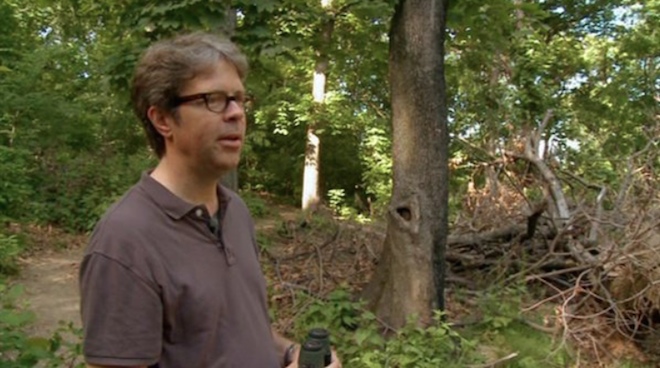 Jonathan Franzen. The celebrated author of The Corrections and Freedom (and a board member and spokesperson for the American Bird Conservancy) says he was introduced to birding in the park one spring day years ago. “It was like the trees were hung with ornaments,” he recalls. “It was amazing.”

He continues: “It was one of the rare times in an adult’s life when the world suddenly seems more magical rather than less.” Franzen offers up more gems throughout the film, and while it’s tempting to quote them all here, I won’t spoil the film for you. Suffice it say, like all of Kimball’s subjects, the guy has a way with words. — Matt Mendenhall, Managing Editor

Images from the film courtesy of HBO.

My Bird Problem by Jonathan Franzen, an essay published in October 2010 on Oprah.com