Become a member and get exclusive access to articles, contests and more!
Start Your Free Trial
BirdWatching  •  News & Features  •  Birdwatching  •  How Warren Petersen, Arthur Allen, and Henry Kyllingstad found the Bristle-thighed Curlew’s nest in Alaska in 1948 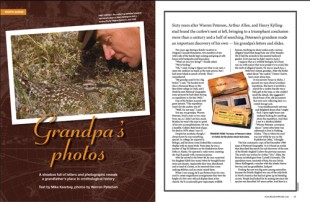 Sixty years after Warren Petersen, Arthur Allen, and Henry Kylling­stad found the Bristle-thighed Curlew’s nest, bringing to a triumphant conclusion more than a century and a half of searching, Petersen’s grandson made an important discovery of his own – his grandpa’s letters and slides.

Two years ago during a family vacation in Oregon’s Cascade Mountains, two members of my wife’s side of the family kept coming and going at odd hours with backpacks and binoculars.

“What are you two doing?” I finally asked.

“Oh,” I said, trying to figure out what to say next. I enjoy the outdoors as much as the next person, but I had never hiked in search of birds. Then I remembered:

“My grandpa used to be a big birder,” I said. “He banded more than a thousand ibises on the Bear River refuge in Utah, and I think he sent National Geographic some pictures he had taken during an expedition in the late 1940s.”

One of the birders reacted with great interest. “The expedition wasn’t for the curlew, was it?”

You see, my grandpa, Warren Petersen, lived a state or two away from me, so I didn’t see him much. Besides, he wasn’t the type to speak of his own accomplishments. He was a humble, Golden-Rule kind of guy. He died in 1979, when I was 12.

Despite his modesty, though, I always knew he was something special. In college, he majored in biology, and his dorm room looked like a museum display with its many birds. Years later, he was a teacher of Yup’ik Eskimos on the Kuskokwim River Delta in Alaska. He operated a radio tower, assisting the Yup’ik people with communications.

After he moved to the lower 48, he once surprised his daughter Edith (my mom) when he brought home seven pet skunks. Apparently they were abandoned and in need of a home, so he removed their scent-making abilities, and my mom raised them.

When I was young, he’d use flowers from his own yard to create magnificent arrangements that were the height of a five-year-old and display them at his church. He’d occasionally give impromptu wildlife lessons, teaching me about snakes and a curious alligator lizard that hung from one of his thumbs. He’d find the animals in his massive backyard garden. (Let’s just say he didn’t need to mow.)

I suppose that as a wildlife biologist, he’d have run-ins with nature that most people try to avoid, like the teeth of alligator lizards. He was so much fun, a little boy’s dream grandpa. After the birder asked about “the curlew,” I knew I had to learn more about him.

At my parents’ house in Idaho, I quizzed my mom about Grandpa’s expedition. She knew it involved a search for a curlew, but she was a little girl at the time, so she couldn’t recall the details. She suggested I check boxes of his old documents that were now collecting dust in a rented storage unit.

I was simultaneously nervous and delighted about what I might find. I spent eight hours one weekend looking for anything about the expedition. And then I saw it: a shoebox labeled “Warren Petersen: correspondence.” Letter after letter was addressed to him in Kalskag, Alaska. “This is where his mail was sent while he was on the Kuskokwim Delta,” I thought.

The box contained a copy of the December 1948 issue of National Geographic. In it I found an article that described the search for and discovery of the nest of the Bristle-thighed Curlew the previous summer. The article was written by Arthur “Doc” Allen, the famous ornithologist from Cornell University. The expedition team consisted of him; his son David; Henry Kylling­stad, a teacher with the Alaska Native Service; and my grandfather. Jackpot!

Finding the nest was big news among naturalists because the Bristle-thighed was one of the only birds in North America that had not given up its breeding secrets. People had looked for its nesting site since the species was described 163 years earlier. And here in a shoebox were the raw materials of how the expedition came together and its aftermath. I found virtually all correspondence – 73 letters in all – from before, during, and after the journey.

Grandpa kept everything: letters in which he and Allen discussed the logistics of the trip, such as the supplies they’d need and how they’d travel; permits allowing him to bring specimens back from Alaska; a letter from H.B. Conover, a researcher at the Chicago Natural History Museum, noting the payment of $50 for a specimen of a downy young curlew that Grandpa had collected, plus $5 for a goose skin.

I also found motion pictures, stills, and a map used by Nat Browne, the bush pilot who flew the men to their destinations. My mom later directed me to Grandpa’s cameras and slides, which provided even more visual details of the expedition. They include a shot of Kyllingstad’s face close to a curlew, which proves how tame the birds were. Photos also show the Yup’ik people and their homes, the plane the men flew in, and the flat landscape.

Grandpa was also quite a bird photographer. Gyrfalcon, Sabine’s Gull, Arctic Tern, and Black-bellied Plover were among his many subjects.

The curlew discovery left me with a deeper appreciation of my grandfather and gratitude to my mother for saving what must have looked like an insignificant shoebox. My, what a story it tells.

Mike Kearbey is a physical education teacher from College Place, Washington. Thanks to his grandfather’s passion for birds, Mike has a new-found interest in birding, one that he hopes to share with his own young sons.

The amazing Bristle-thighed Curlew
Migration: Flies nonstop more than 3,700 miles (6,000 km) one way – one of the longest nonstop migrations of any bird. Young birds do not breed until age 3, 4, or 5, remaining in Oceania year-round.

Flightlessness: About half of adults studied on Laysan Island became flightless for at least two weeks from September to November when they lost their primary and secondary feathers. The species is the only shorebird known to induce flightlessness through molting.

Tool use: Curlews use pieces of coral as tools to open eggs of other birds, repeatedly throwing the coral until the shells crack. Similarly, the birds dismember crabs, snails, and other prey by slamming them against rocks or the ground. No other shorebird uses tools.

How history was made
First collected in Tahiti in 1769 and declared a new species in 1785, the Bristle-thighed Curlew was long thought to nest somewhere in the South Pacific. But then, in the late 1800s, biologists and collectors began finding the birds in Alaska.

Further sightings in the 1920s suggested the curlew must breed in western Alaska. The location, according to an article in the journal of the American Ornithologists’ Union, was “probably above timber line on some of the mountain ranges.”

Enter Henry Kyllingstad, a school teacher from North Dakota who joined the Alaska Native Service in 1941 to teach at Mountain Village on the Yukon River. He recorded curlew sightings each May beginning in 1944, and in subsequent years, he looked for nesting curlews with other teachers.

One of them was Warren Petersen, a teacher stationed at Kal­skag. Their searches in 1946 and 1947 were unsuccessful but promising enough to get the Arctic Institute of North America, National Geographic Society, and Cornell Laboratory of Ornithology to support an expedition the following year.

Cornell’s Arthur “Doc” Allen and his son David joined the teachers in early June. They were ferried by bush pilot Nat Browne to Igiak Bay, a site on the coast unexplored by ornithologists, but six days later Kyllingstad and David flew to a lake 20 miles north of Mountain Village. There, on the morning of June 12, 1948, they made history.

They heard the Bristle-thigh’s piu-wit whistle and followed it to a plateau-like area. After agreeing on the nest’s likely location, the two rushed toward it. When the curlew flushed, the nest was found.

“There it was, right where my wife had been telling me I would find it – practically in my back yard,” Kyllingstad wrote in the June 1987 issue ofBirder’s World.

Petersen and the elder Allen arrived a few days later and learned that the 163-year search for the nest of the Birstle-thighed Curlew was over. But they weren’t done yet. Petersen located another nest on June 15 on the next plateau to the south.