Bird rehabilitators in India’s capital city, New Delhi, are the subject of a film that is the first ever to win the documentary prize at both the Cannes and Sundance film festivals. The 90-minute film opens today, October 21, in New York City, and it will be released in several other cities in the United States and Canada over the next month or so. It will be available on HBO and HBO Max sometime in 2023.

All That Breathes is the story of two brothers, Nadeem Shehzad and Mohammad Saud, who run a bird clinic in their basement. They struggle with a lack of funds, with the seemingly constant stream of birds that are brought to them, and with the guilt of not having enough time for family.

Despite their challenges, we never doubt that Nadeem and Mohammad and their volunteer assistant Salik are committed to rescuing as many birds as possible. Most of their patients are Black Kites — raptors with a vast range throughout Asia, Europe, Africa, and Australia. We also see them caring for other birds of prey and vultures. 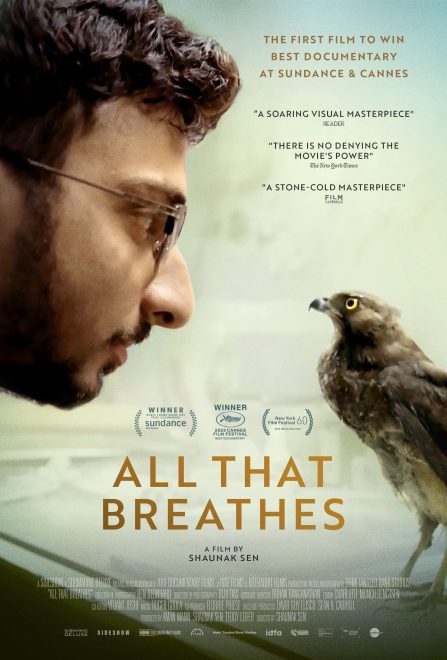 We learn that Nadeem and Mohammad’s late mother had a saying: “One shouldn’t differentiate between all that breathes.” Her philosophy inspired them to begin caring for birds about 20 years ago and continues to the present day. It’s also apparent that her philosophy inspired the film’s director, Shaunak Sen, not only with the film’s title but also with its visually stunning cinematography. New Delhi is a metropolis of more than 32 million people, and yet Sen shows a variety of wildlife in the city, including flocks of birds, a turtle, and an amazing opening shot that I won’t spoil.

At one point, one of the brothers laments the fact that they have so many winged patients. “Hundreds of birds falling out of the sky every day. What amazes is people go on as if everything’s normal.”

The film’s narrative implies that New Delhi’s polluted air causes so many birds to “fall out of the sky.” And the reviews that I have read of All That Breathes seem to agree that pollution is the main issue, which makes sense, because New Delhi is one of the world’s most polluted cities.

However, in February 2020, The New York Times published an article about the brothers under the headline “Meet the Bird Medics of New Delhi.” The writer, Oliver Whang, explains that people fly kites made with manja – “cotton thread coated with colorful layers of crushed glass.”

“Manja is often used to fly paper kites, a popular pastime in India, one that became a symbol of national pride in New Delhi after the country gained independence from Britain in 1947,” Whang explains. “On clear days, especially after monsoon season, when the city’s rooftops are dotted with people, kites speckle the sky, their threads forming an invisible cat’s cradle overhead.” One shot in the film briefly shows this release of kites from rooftops.

Sadly, each year, thousands of birds’ wings are slashed by the glass in manja. In the film, Nadeem, Mohammad, and Salik treat raptors with physical injuries, presumably caused by encounters with manja. I was surprised that this wasn’t explained in the film, but nevertheless, I absolutely felt the dismay at people going about their lives “as if everything’s normal” when we humans are causing so many environmental calamities around the world.

Whether birds are harmed by manja, polluted air, free-roaming cats, glass windows, pesticides, overfishing, oil spills, global warming, or any other number of causes, the threats virtually all originate in the human desire for more. Most people don’t recognize or care to see what is happening, but those who work in wildlife rehabilitation see the consequences of our folly every day.

I am ecstatic that this film will give audiences far and wide a glimpse into the world of bird rehabbers, who are true heroes no matter where in the world they work. And it’s wonderful that the judges at Sundance and Cannes saw something extraordinary in All That Breathes.

And in awarding the L’Œil d’or (Golden Eye), the top prize for documentary films at Cannes, the jury said:

“The Golden Eye goes to a film that, in a world of destruction, reminds us that every life matters, and every small action matters. You can grab your camera, you can save a bird, you can hunt for some moments of stealing beauty, it matters. It’s an inspirational journey in observation of three Don Quixotes who may not save the whole world but do save their world.”

Watch the trailer for ‘All That Breathes’

Upcoming releases for ‘All That Breathes’