By all accounts, the 2nd ABA Mid-Atlantic Young Birder Conference was a huge success. The event attracted more than 120 young birders from eight states and the District of Columbia to the Ashland Nature Center in Hockessin, Delaware, on Saturday, September 14.

We listed the conference in our online calendar and wanted to attend but couldn’t make it, so we asked Mike Hudson, a 17-year-old birder from Baltimore City, Maryland, to let us know what we missed.

It was 6:15 in the morning when my alarm went off on September 14th. I slipped out of bed, quickly got dressed, slipped my binoculars on, and stepped into the chilly morning air. I remembered doing the same thing last year, at the first American Birding Association Mid-Atlantic Young Birder’s Conference (MAYBC), but this year seemed different somehow.

Maybe it was the new lineup of presenters; or perhaps the promise of seeing faces that were now familiar and becoming acquainted with a host of new ones. Or, perhaps, it was just that it was a good 25 degrees cooler this year! In any case, the second MAYBC was different from last year’s but certainly lived up to the sky-high standards set the previous year.

The morning began with us early-risers and arrivals gathering for a series of pre-conference birdwalks led by many of the presenters and speakers. These walks were led by the likes of Michael O’Brien, Louise Zemaitis, and Chris Bennett, to name just a few, and began the day on a high note. The different groups touring the beautiful grounds of the Ashland Nature Center came across such characteristic fall species as Cape May Warblers and Sharp-shinned Hawks.

Upon the walk’s conclusion, the “real” action began with opening remarks from Jeff Gordon, the ABA president, and some words of welcome and advice from Bill Stewart, the conference’s dedicated organizer. The advice: See everything you can and have a good time doing it! 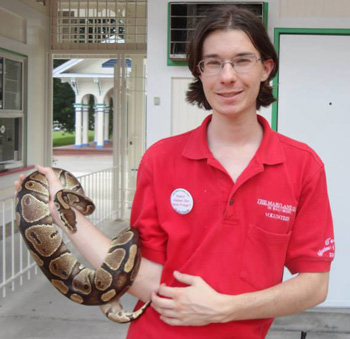 Mike Hudson is a 17-year-old birder from Baltimore City, Maryland, and a senior at Baltimore City College High School. Mike has been interested in the outdoors since his grandfather started drawing birds with him 10 years ago. He volunteers at the Maryland Zoo in Baltimore, Audubon Maryland-DC, and several area nature centers. You may recall reading about Mike’s participation in shorebird conservation in the 2012 book Moonbird: A Year on the Wind with the Great Survivor B95, by Phillip Hoose.

Concurrent sessions were running for new and experience birders at all times, and every session was packed. The discussion of how ABA’s move to Delaware will affect its mission by Jeff Gordon was just as well attended as the workshop on hawk ID by Jean Woods, curator of birds at the Delaware Museum of Natural History.

While all of the talks were superb fun and quite fascinating, I don’t think anyone will be surprised that the favorite sessions — and the ones least changed from last year — were the hawk-watching sessions. Unlike last year, winds were cooperative this time around, and watchers were overjoyed and awed to see flights of dozens upon dozens of Broad-winged Hawks passing overhead throughout the morning and early-afternoon hours.

During the breaks for keynote addresses, attendees were wowed by an incredible pair of speakers. Ioana Seritan put in an eloquent plug for attendees to look into the ABA Young Birder of the Year Contest, and there was no one in attendance better to talk about it; she is the most recent winner of the 14-18 category! And she wasn’t the only winner: Joining her for a brief Q&A session was Eric Hughes, the winner of the 10-13 category. We were in the midst of youth birding celebrities!

The other keynote address was delivered by Jonathan Alderfer (pictured above), the art director for the National Geographic field guide series. I had seen versions of his presentation of his journey to bird artist before, but I could have watched it 10 more times. Included was a stop-animation video of the process of illustrating a Harlequin Duck pair. His presentation was fascinating, but, in a sentiment others shared with me, his manipulation of watercolor is so elegant and swift, it would have been sufficient just to watch that video!

In just two years, the MAYBC has garnered a reputation for hosting great birds and a good time. This year, like last, was full of surprising and eye-opening experiences. After such remarkable successes twice, one can only wonder what next year will be like! I hope to find out, and I hope I’ll see you there! — Mike Hudson