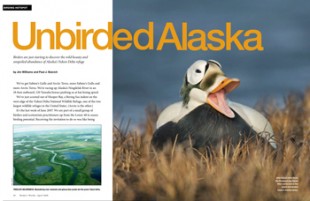 We’ve just scooted out of Hooper Bay, a Bering Sea indent on the west edge of the Yukon Delta National Wildlife Refuge, one of the two largest wildlife refuges in the United States. (Arctic is the other.)

It’s the last week of June 2007. We are part of a small group of birders and ecotourism practitioners up from the Lower 48 to assess birding potential. Receiving the invitation to do so was like being asked to go to a four-star restaurant to see if there’s anything good to eat.

We can see birds only in the air because the slick-with-mud riverbanks are too high to peek over. It’s just gulls and terns, gulls and terns. But the gulls are almost all Sabine’s, dapper in bold black, gray, and white, more Sabine’s Gulls than any of us have seen before.

We come to a turn in the river. Ulric Ulroan, our guide and pilot, banks the boat sharply to the left, and we cling to the gunnels. Our roaring boat obviously is an unexpected intrusion for the Pacific Loon minding its own business just beyond the river’s curve. The bird comes off the water as loons do: slowly, with effort, reaching air speed as we draw even with it. We have a Pacific Loon in full breeding plumage five feet off the water, almost within reach. This is what you call a life look. Later in the trip, Red-throated Loons will offer the same courtesy.

Yukon Delta is over 21 million acres, larger than the state of South Carolina. Filled with abundant wildlife and vast, unspoiled landscapes, yet roadless and reachable only by air — and only by a few — it’s essentially virgin birding territory, tundra and ponds and rivers with mountains on the edges. We are flatland wet-tundra visitors here.

Birders are just beginning to discover the treeless, low-level marshland of the Yukon Delta National ­Wildlife Refuge. The refuge is known for abundant fish and other wildlife, including moose, caribou, and black and grizzly bears, but it’s also a premier waterfowl area, hosting more than 750,000 swans and geese, 2 million ducks, and 100 million shorebirds and other water birds.

The Yukon-Kuskokwim Delta is the seasonal home to all of the minima subspecies of Cackling Goose, nearly all of the world’s Emperor Geese, about 80 percent of the nigricans subspecies of Brant (“Black Brant”), and tens of thousands of Greater White-fronted Geese. Nearly 75 percent of the Alaskan population of Sandhill Cranes (canadensis, or “Lesser”) also breeds in the delta.

Ulric is an exceptional guy: a knowledgeable birder, the mayor of his Yup’ik Eskimo village at age 30, and at 6 foot 5 inches tall, the go-to guy for his village basketball team. He’s taking us to his birding camp, which sits gill-to-gill with subsistence fishing camps along the river. June is salmon as well as birding season.

Settled into our tents while he, his uncle Mark, and son Aaron are busy with fire and food, we get to look around.

The delta is flat, very flat. And birdy, very birdy. Birds can be seen in all directions: Dunlin, Black Turnstone, Semipalmated Sandpiper, same-old same-old gulls and terns, Emperor Geese, Long-tailed Jaeger, Bar-tailed Godwit. We just stand and slowly scan 360 degrees. Scheduling problems brought us here two or three weeks later than intended, so we’re watching the tail lights of the breeding season.
We would miss the deafening flocks of Emperors and all but two of the male Spectacled Eiders, a threatened species. (We settle for nesting females.)

We find nesting Willow Ptarmigan and Western Sandpipers, the ptarmigan holding tight to her nest, hard to see when she’s at your feet. Glaucous Gulls, wedding white in the blue sky, float by. Parasitic Jaegers, neighborhood bullies, rumble through. Hoary Redpolls sit on the driftwood stumps that high water has dumped onto our front lawn. In three days, we never go more than quarter of a mile from camp, yet we see all the birds we can handle.

When the trip began, with a 400-mile flight out of Anchorage, our first stop was the city of Bethel. It may be the commercial, administrative, and transportation center for the Yukon-Kuskokwim Delta, a place where 6,000 people live, but it has birds: Jaegers patrol the streets like cops. Gray-cheeked Thrushes have parceled out the city, one thrush per block. Red-necked Phalaropes, mostly juveniles, decorate the ponds that seem to be in everyone’s backyard. Yellow Warblers, Northern Waterthrushes, and Rusty Blackbirds share the willow thickets with puddles along their roots.

Wilson’s Snipe winnow in flight display every quarter of a mile. Eastern Yellow Wagtails with their flap-and-fold flying style inhabit the wooded edge of the city sewage pond. And a surprising number of birdfeeders hang around town, visited by redpolls (both flavors), Dark-eyed Juncos, even Pine Grosbeaks.

In Bethel, we connected with John McDonald, an experienced outfitter who takes birdwatchers for long river rides on June weekends. We piled aboard for adventure on the Gweek River, the name alone worth the ride, and traveled upriver about 40 miles, stopping at different habitats in which more than 50 bird species can be seen. (Moose and beaver are added treats.)

Besides the birds already discovered in town, we encountered many ducks (American Wigeon, Northern Shoveler, Green-winged Teal, Common Goldeneye), Rough-legged Hawk, and Northern Goshawk. A Hudsonian Godwit nesting hotspot can also be found up here, but once again our late-June timing was lousy.

1. Hangar Lake, on the east side of town. Many Red-necked Grebes and Pacific Loons.

2. Small boat harbor. Good for gulls and terns. Wilson’s Snipe and Red-necked Phalarope are easy to find in wetlands opposite the parking areas.

5. City dump and sewage ­lagoon. Early dabblers and phalaropes in spring and up to five species of gull. Eastern Yellow Wagtails can be found in thickets near the lagoon.

6. Kuskokwim and Gweek ­Rivers. American Wigeon, Northern Shoveler, Green-winged Teal, Common Goldeneye, Rough-legged Hawk, and Tree, Bank, and Cliff Swallows, as well as most birds seen in Bethel. Northern Goshawk, Hudsonian ­Godwit, and Northern Shrike are encountered ­often. Kuskokwim Wilderness Adventures runs birding trips on the rivers in cooperation with the U.S. Fish and Wildlife Service in May and June. Boats depart the boat harbor at 6 a.m. and return at 3 p.m. Lunch is provided. Reservations required.

From Bethel we flew 135 miles northwest to Ulric’s village of Chevak. Audrey, our young pilot, her thick brown hair braided once and threaded through the back of a baseball cap, learned we were birders and gave us a flight 500 feet over the landscape. Nesting Tundra Swans appeared like white buttons on the weave of green and blue beneath us.

We ate fresh chum salmon at Ulric’s camp, then king salmon at his home before flying again, this time 90 miles northeast to the village of St. Mary’s. There we were to patrol the gravel road linking that town with Mountain Village, 18 miles to the west. Bristle-thighed Curlews nest in the area, especially in the region between conveniently placed mile markers seven and nine. The birds were off the nests, though, out of sight, out of touch, neither seen nor heard.

We talked to a helicopter pilot, working with a banding team, who had held a curlew chick the day before. “It’s just a 20-mile walk north,” he told us. On tundra the texture of marshmallows, that’s more than a long, long way.

Our search did offer black-bellied American Golden-Plovers, nesting Least Sandpipers, more Willow Ptarmigan, more trolling jaegers, and our lone bear, a lumbering weight-lifter grizzly. From a quarter mile away, it sniffed us once and found us unappealing.

This is a plan-ahead trip, for certain. Accommodations are not difficult to find in Bethel, but in Chevak you rely on the hospitality of its residents. Ulric handled that for us. St. Mary’s had one apartment available for short-term lease. Rental vehicles are sort of like Bristle-thighed Curlews — hard to find.

Birdwatching everywhere throughout the trip was exceptional, and the opportunities for bird photography were better by a factor of 10. Our looks at Arctic birds were nothing short of stunning, the environment amazing.

Oh, and that mud.

It borders the rivers. It lies beneath the ponds. It is slick. It is slippery. You had best be careful.

Jim Williams writes a column about birdwatching for the Minneapolis Star Tribune newspaper. He is a former associate editor for Birding magazine. Paul J. Baicich is a co-author with the late Colin J.O. Harrison of A Guide to the Nests, Eggs, and Nestlings of North American Birds (2nd ed., Princeton University Press, 2005). Originally Published April 1, 2008